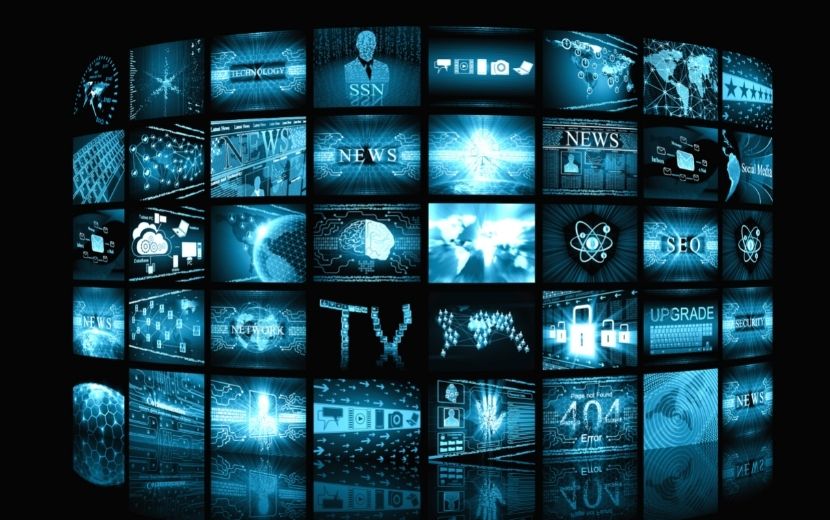 The role and responsibility of the media is to provide impartial, credible information which forms the basis upon which people can make informed decisions. In order to live up to this substantial responsibility, a media publication cannot rely on funding – especially not when that funding comes from institutions or individuals who have a clear agenda or cling to a specific narrative. At BizNews, we don’t believe that our audience is stupid nor that they should be told what to do or what to think. This article by PANDA – Pandemics ~ Data & Analysis – takes a rational look at the way in which media publications in South Africa are necessarily compromised as a result of the funding which they receive. The incident in question is an attack by South African journalists on the Mail & Guardian for publishing an opinion piece on vaccine hesitancy. PANDA points out that the journalists’ criticism of the Mail & Guardian, which they assert has “badly let down its readers”, is not based on a ‘reasoned, data-driven counter-argument’ – but rather a baseless reproval of their audacity to publish a dissenting view. – Nadya Swart

Groundup, Bhekisisa, Daily Maverick and the War on Truth

Recently, the Mail & Guardian had the temerity to publish an opinion piece by Angelo Ryan on the topic of “vaccine hesitancy”. “There’s been little to no fair representation of the reasons people may choose not to vaccinate,” Ryan says. “If you want to win people over … [a]ssuming that they are ignorant or selfish or simply believe in prayer is not enough.” “If you want to get vaccinated, you should be empowered to do so. But don’t assume everyone who doesn’t is a moron.” “So stop worrying about who is getting vaccinated and be happy that you’ll be safe.”

You might have expected a reasoned, data-driven counter-argument along the lines of, “The vaccines are safe. The vaccines work. Here are some good reasons to take it and make your own choice.” However, if you had been paying attention to what PANDA and the corners of the mainstream media that are still free have been saying for the last few months, you would have also expected the response that was actually directed at Mail & Guardian.

It came in the form of an opinion piece published by the Daily Maverick, the newspaper who earlier this year told the Press Ombud that they saw their role in the COVID-19 crisis as being to silence proponents of views government identified as “dangerous” by slandering groups disagreeing with government and by denying them a platform in the mainstream media.

The Daily Maverick opinion was co-written by Mia Malan of Bhekisisa and Nathan Geffen of Groundup. Neither of them declared any conflict of interests though they are clearly conflicted. In essence, they attack the Mail & Guardian for publishing Mr Ryan rather than engaging on his points.

Bhekisisa describes itself as a “Centre for Health Journalism” and its aim is to shift government policy, set national agendas and define conversations on health issues. Here’s what the Bhekisisa website says about where their money comes from. 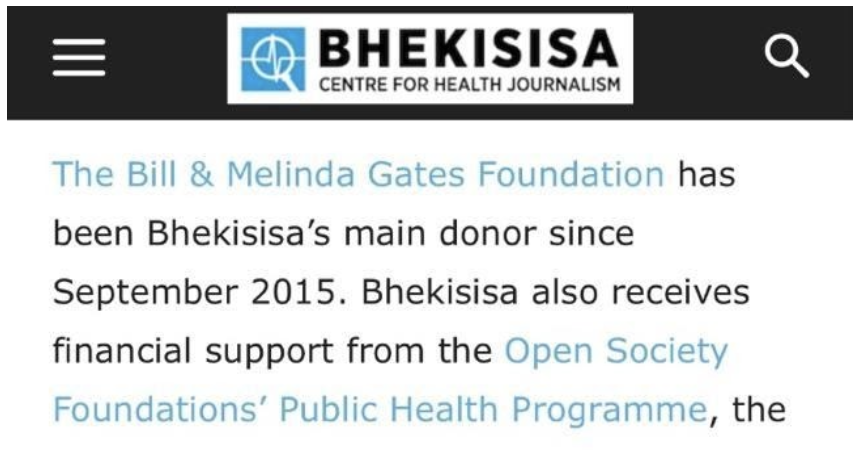 Of course those who were looking for an excuse to stop listening will jump at the mention of the Gates Foundation to call us conspiracy theorists. We’ve made our position on this clear before. We’re not suggesting that Gates is part of a cabal meeting secretly behind closed doors – well, except perhaps at the Epstein residence. Bill Gates has an enormous amount of money that he wishes to spend on replacing his legacy of corporate espionage with a legacy of philanthropy. He has a particular affinity for vaccines. He wants to be remembered as the one who funded a vaccine that cures AIDS or cancer.

Why, though, is Gates not spending all of his money funding actual healthcare projects? Why is he making grants to journalists? Funding projects is a slow burn. To create a legacy fast, you need to buy influence and control the narrative. For that you need wordsmiths on the payroll. Gates wants people to focus on vaccines because he is the king of vaccines. Bhekisisa promises to shift government policy, set agendas and define conversations. By funding Bhekisisa Gates is buying influence. So Mia Malan is doing exactly what the Gates Foundation pays her to do when she tells Mail & Guardian what their agenda should be and tries to define the conversation around the COVID-19 vaccines.

Bhekisisa’s other main funder is the Open Society Foundation. This is another organisation founded by a billionaire with a desire to be remembered as a philanthropist – George Soros. Soros and Gates have a history of working together. They recently announced the launch of Global Access Health, which aims to strengthen the global rollout of medical technology. GAH is in the process of acquiring Mologic Ltd, best known today for the deep-nostril technology used to deliver rapid COVID-19 tests.

Soros not only funds Bhekisisa, his Open Society Foundation also funds Groundup and the Daily Maverick.

Certainly Messrs Gates and Soros do not have weekly calls with Bhekisisa, Daily Maverick and Groundup to tell them what to report on. However, these media houses know that they risk losing the funding they depend on if they don’t promote the narratives these billionaires support. They will never express any scepticism about vaccines and they must show that they have the power to do what they claim – shape conversations and set narratives.

The role of the media

Geffen and Malan say that the Mail & Guardian has “badly let down its readers”. Why? Because it published a dissenting view. Because it failed to adopt the patriarchal view that Fox News pioneered and that the left wing press has adopted since the Trump era. This view posits that the public cannot be trusted with the facts, that instead of telling us what is happening, the Media has to interpret the facts for its poor, dumb readers, alternatively give readers the interpretation of the facts they demand to feel more comfortable in their political bubble. Over time, this approach forces the Media to subvert facts that don’t accord with their agenda.

The “misinformation” or “disinformation” labels are now recognised by the public at large as “views the mainstream disagrees with”. Whether or not you have been vaccinated or agree with the vaccination programme, this subversion of information is dangerous. Who knows what view Messrs Gates and Soros might seek to impose tomorrow.

Admissions of censorship and calls for more censorship have streamed in from other parts of the media as well. Refilwe Moloto of PrimeMedia’s Cape Talk quoted the Daily Maverick opinion piece and quipped, “This is why I don’t interview ‘the other side’ on the Breakfast Show.” Earlier this year, CapeTalk also sprang to Daily Maverick’s defence in PANDA’s Press Ombud complaint by deleting recordings of a show that compromised a Daily Maverick journalist.

Geffen and Malan’s flat earth analogy is an example of the Trump-era fist-pounding denial of ambiguity that has become characteristic of parts of the Media. It is simply untrue that the levels of safety and efficacy demonstrated by the mRNA vaccines are as incontrovertible as the shape of the earth. If this were true, Pfizer would not refuse, in the vaccine sale agreements, to give any warranties whatsoever regarding efficacy or go to extraordinary lengths to indemnify itself against any liability if the vaccines prove to be unsafe. Israel is in the throes of a third wave of cases, hospitalisations and deaths, despite a large portion of the population being vaccinated. It is also a fact that the vaccines are not “approved” by the US Federal Drug Administration (and only authorised for six-month emergency use during the state of disaster in South Africa) and that the long-term side effects will not be known until the trials are completed in 2023. Reports of vaccine adverse events for the COVID vaccines are at an unprecedented level in the history of vaccines.

Malan and Geffen also draw conclusions that cannot be drawn from the data. They seek to compare France with Namibia and South Africa during July to conclude that the lower number of cases and deaths is due to France’s higher vaccination rate. We know that COVID spreads more indoors and that there is a seasonal effect. France in summer cannot be compared with South Africa in winter. Furthermore, the peak of France’s second wave was in April and by July they were in the trough of their waves. By contrast, both Namibia and South Africa peaked at this time.

They also present an entirely anecdotal account of a doctor in Groote Schuur hospital who comments that none of the people admitted to the COVID high care ward were vaccinated. We understand that this ward has 19 beds. 3% of the South African population has been vaccinated and it is likely that a disproportionate number of these are wealthier patients likely to be cared for in private hospitals. 3% of 19 beds is 0.57 beds. It is therefore entirely unremarkable that 0 beds in this ward were occupied by vaccinated patients. This is not proof of the efficacy of the vaccines. Indeed if even one vaccinated patient were in the ward, this would suggest that the vaccines do not work, which is also not an incontrovertible truth. There is no need to rely on anecdotal evidence like this. The Western Cape government data shows that between the first and third waves, the region experienced more hospital admissions and more deaths in the 60 years and older population group even though 60% of these people were vaccinated during the third wave and none were vaccinated in the first. The comparison of waves 2 and 3 is similar with only a marginal reduction in the 60-69 year old group and an increase for the 70+ group. 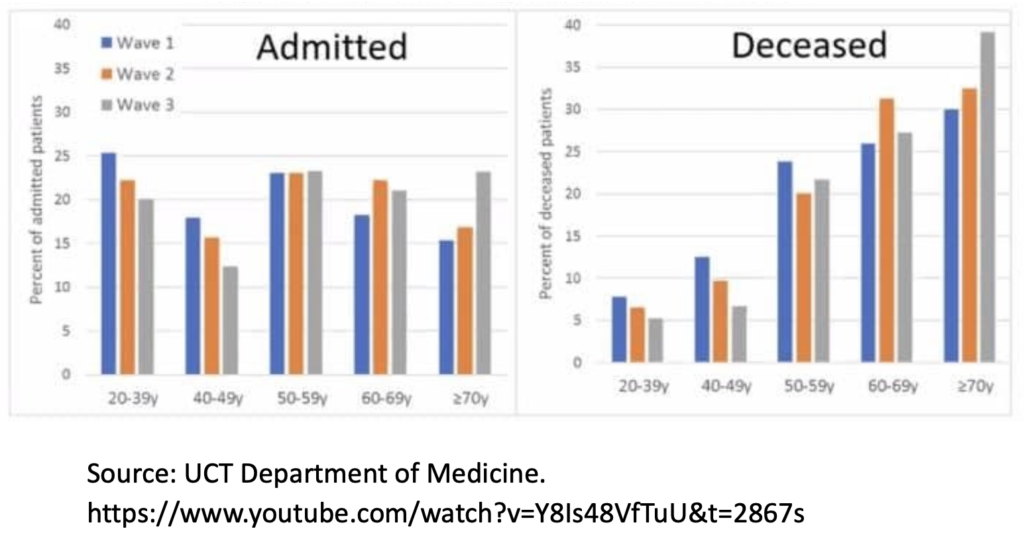 Again, we do not claim that the vaccines are not working or that they are manifestly unsafe. We simply say that Geffen and Malan overstate the safety and efficacy because they believe it to be their responsibility to present certain narratives forcefully and to censor others.

In August last year, the world’s top experts on the topic of vaccine hesitancy began working on a guide to assist governments in maximising the uptake of vaccines. If you were looking for an actual expert to comment on the topic, neither Geffen nor Malan would be on your panel. One of the foremost experts in this field is Emily Brunson of Texas State University. She echoes Angelo Ryan’s don’t-assume-everyone-is-a-moron sentiment.

Actual experts therefore agree that the approach these conflicted organisations punt – of treating readers like morons and telling them what to think – serves only to promote distrust and hesitancy to take the COVID-19 vaccines.

Daily Maverick, Groundup, Bhekisisa and others have once again told us that they are promoting a specific narrative and censoring and demanding that others censor contrary views. As Ross Douthat noted recently in the New York Times, “People need to consider how this plays out in other areas where the Press might wish to control the narrative …” Can you trust organisations that tell you that this is how they are conducting the business of journalism to give you accurate information in future? We think not.