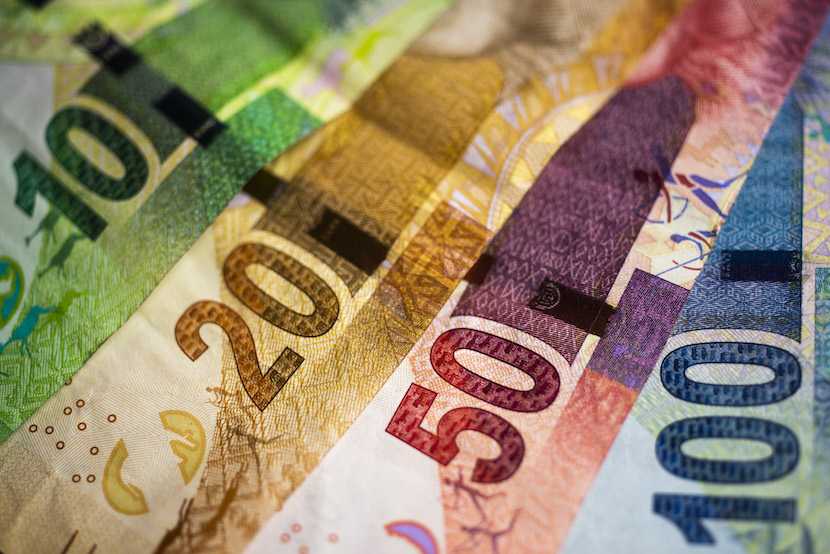 The BankservAfrica Take-home Index records payroll payments from large corporates and medium-sized firms – and it has crunched the numbers and come up with some frightening figures. The company says the number of take-home monthly payments in June 2020 decreased by -20.7% on a year ago, and suggests that it is possible that a fifth of employees in the private sector did not receive a salary in June 2020. Read that again: did not receive a salary! The drop could also reflect job losses, or pay cuts: whichever way your look at it, the tidings are grim for ordinary people and for the economy. If people are not being paid, they will cut spending which takes its toll on retail spending. And economic considerations aside, the payroll figures should remind us all of the terrible toll that the Covid-19 pandemic is having on people all over the country. – Renee Moodie

Missing salaries or lost jobs – the crisis deepens in June 2020!

The number of take-home monthly payments in June 2020 decreased by -20.7% on a year ago. The crisis stemming from the Covid-19 lockdown levels and its impact on the economy, has affected a fifth of employees’ salaries that get processed by BankservAfrica through the South African National Payment System.

As the BankservAfrica Take-home Index (BTPI) records the majority of payments from large corporates and a fair number of medium-sized firms that are served by payroll service providers and firm-owned payroll administrators, the recent decrease may not reflect the full impact of salary declines on small firms. However, with the BTPI over-representing the majority of payments from civil servant and state-owned entity payrolls, it becomes evident that the reduced salary numbers are most likely to be in the private sector. This is supported by data showing an estimated 30% of the BTPI monthly equivalent payments are paid by the broader government sector compared to 21% shown in Stats SA’s Quarterly Employment Survey.

It is possible that a fifth of employees in the private sector did not receive a salary in June 2020. The -20.7% decline could be the result of job losses or it could due to a temporary pause in payments. We caution that while our salary data cannot be used as a measure of the unemployment rate, it can, in this very unusual time, provide a quick and effective indication of the employment statistics on the ground through the number of salaries paid.

Also read: SA retail sales plunge by more than half of usual numbers

From our data, we can confirm that overall employees received reduced salaries compared to a year ago and that less employees were paid (however, the movements may also be due to some late UIF payments). This strongly suggests tougher times for employees and their ability to spend.

The actual average take-home pay declined by -0.5% in real terms. This could have been the result of instances where salaries may have increased or that the personal income tax provided relief above the current inflation rate.

As the average tax relief of over 5.1%, an increase of 4% in gross salaries on average would have resulted in a 4.2% increase due to this reduction in income tax. Therefore, the 1.7% increase (as reflected in the nominal year on year change in the BTPI) is extremely low. Moreover, when inflation declines, as it currently has, real take-home pay increases at a faster rate – it does not decline as it did in June.

BankservAfrica and economists.co.za have created an estimate of the number of payments for each salary category and their annual movements. This is based on the amount of salaries paid and BankservAfrica’s numbers of how often these payments took place.

The BankservAfrica Private Pension Index (BPPI) declined for the second consecutive month, falling by -0.3% to reach R7 355 in real terms. Real pensions could be declining as a result of the interest rate falls and as other assets have also struggled.

The total value of take-home salaries paid in June declined by -25.6% while total pensions paid dropped by -4.6% both in nominal terms. The combined decline for total take-home pay and pensions was by far the biggest on record at -23.5%!

The numbers are concerning and will have a profound impact on the South African economy. The knock-on impact is also likely to be larger than many have estimated and will have a severe impact on retail sales and consumer spending. 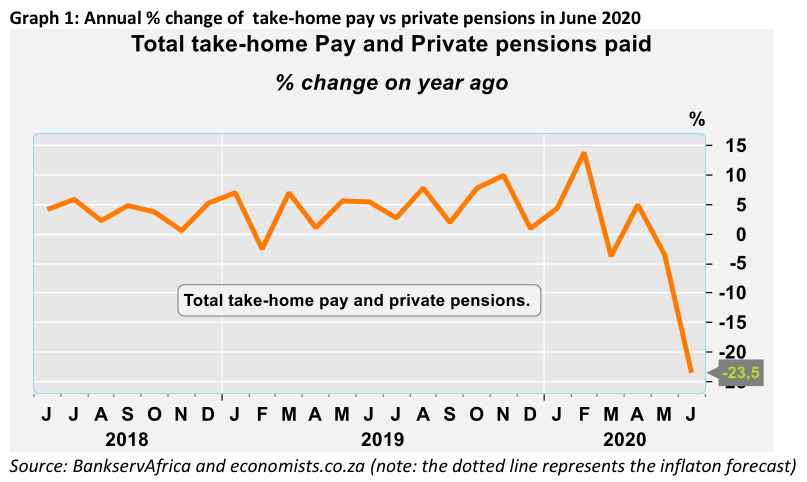 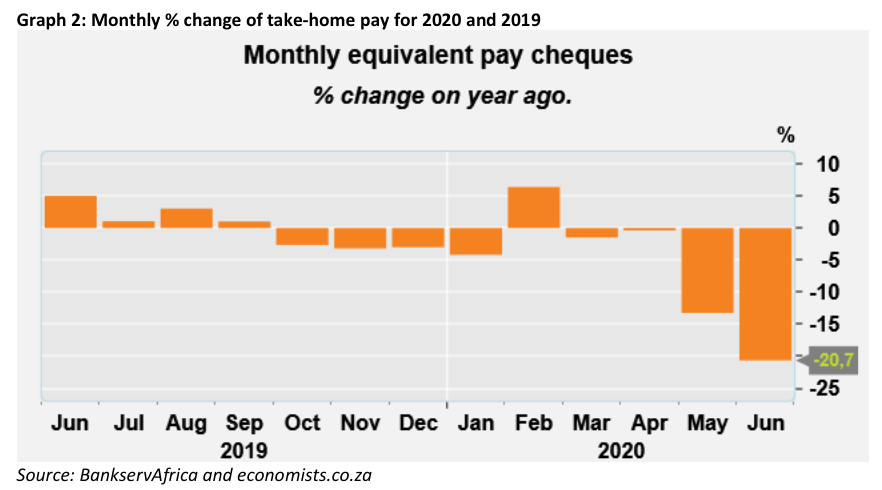 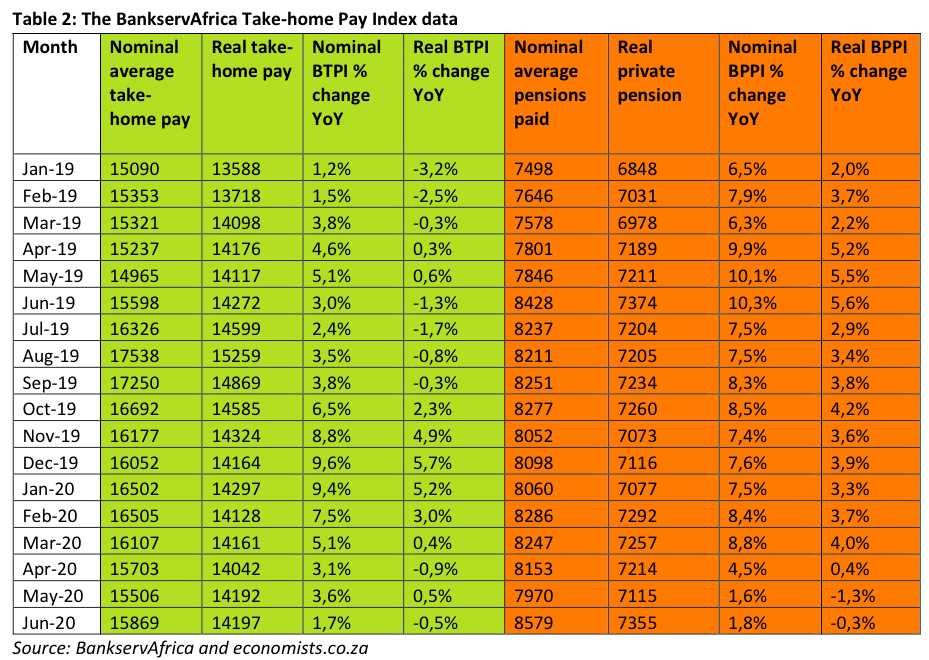 Note on Table 1: Estimates of the number of payments that declined by salary category

Payments data from the BankservAfrica payroll database system were used to determine the estimate number of payment declines per salary category. Weekly payments were adjusted in line with the number of Fridays, Thursday and Mondays in a month. For daily payments, our adjustments are adjusted for the number of weekdays when these payments typically take place. This methodology ensures we compare with like.

It is common knowledge that thousands have lost their jobs because of the so-called “Corona-virus” and the imposed lockdown by the communist government.  Obviously, most of these people who lost their jobs are from the private sector, small businesses, etc.

One question:  How many employees or officials of Government have lost their jobs?  I’m sure we will never know.