If you want to know the future, pay attention to those who are betting good money on probable outcomes . Those who spend all their waking hours reflecting on the big picture don’t always get it right and sometimes their timing can be awful. But for the most part, it pays to be aware of where the smart money is heading. I got a sense of one of these flows a couple years back in Davos when a seemingly innocuous piece written for The Guardian went viral, registering millions of reads around the world. It reported on disclosures that hedge fund managers were buying airstrips and farms in places like New Zealand, the land of the rugby and rain. Reason: As the world becomes increasingly turbulent, the remote home of the Kiwi has become hugely appealing for those seeking peace of mind and a secure place to protect their wealth and families. The latest migration numbers from Auckland tell us that while hedge fund managers may have been early, record numbers are now being drawn to the peaceful island nation. Last year more people immigrated to NZ than ever before, expending the population by over 2%. For context, there were three times as many new arrivals as the number of babies born in the country. With the All Blacks, and its feeder teams in imperious form, there are worse places to see out the current global turbulence. – Alec Hogg

(Bloomberg) – The last time New Zealand’s population grew this much, the world was reeling from an oil crisis and Richard Nixon’s resignation from the White House.

The small nation at the bottom of the South Pacific saw its population surge by 100,300 people in the year to March 31, the biggest nominal increase since European colonization began in the 1840s, according to Statistics New Zealand. In percentage terms, the 2.1 percent gain is the largest since 1974, the year the price of oil quadrupled and U.S. President Nixon was forced to resign by the Watergate scandal.

Then as now, New Zealand’s isolation, relative safety, natural beauty and political stability make it an attractive destination for migrants, who are driving the population increase. Record immigration added a net 71,900 people in the year through March, while natural population growth contributed 28,300. 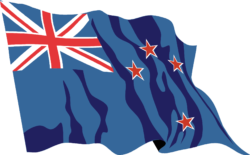 “New Zealand is an island of calm in troubled waters,” said Shamubeel Eaqub, an independent economist and author at Sense Partners in Auckland. “You’ve got uncertainty with Trump, with Brexit, the rise of the far right in Europe, pollution in Asia. There’s a whole bunch of different drivers that set New Zealand up as a great place to be.”

A strong economy is also a drawcard. Economic growth has averaged about 3 percent a year for the past five years, encouraging New Zealanders to stay put instead of seeking better job opportunities and wages in neighboring Australia.

While the rapidly swelling number of inhabitants is helping to sustain economic growth, it is also putting pressure on infrastructure in places like Auckland. The country’s largest city, home to a third of New Zealand’s 4.8 million people, has seen its average house price surge above NZ$1 million ($683,000) and its roads become congested with traffic.