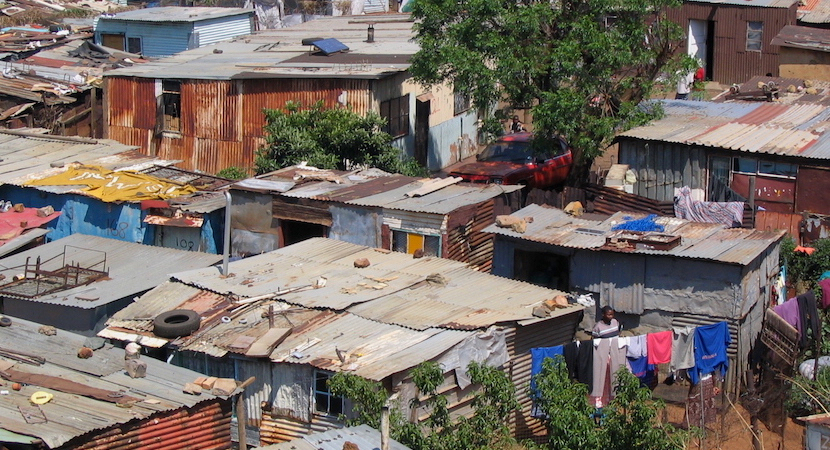 CAPE TOWN — Starting in Crossroads, Cape Town, this New York Times piece is essential reading for every South African who simply by dint of living here, often cannot see the wood for the trees. It traverses the lives of every income cut of Black South Africans, exposing us to the harsh realities and simmering disillusionment born of a new democracy that has delivered little – besides economic freedom to a small elite of mostly business people linked to government contracts. Take a walk in the shoes of an outsider, shake off the numbing garments of familiarity, dare to look in your blind spot. Whether we like it or not, this is how the world sees us. This journey across the black economic landscape is not a comfortable one, but there’s no escaping the God of reality that emerges. To tell ourselves the mirror lies is simply the action of the fall. Freedom for most remains an illusion created in the euphoria of the first democratic elections, the idealistic concept of a rainbow nation nurtured by the noble and well-meaning Archbishop Desmond Tutu, whose Truth and Reconciliation Commission briefly painted over the cracks and healed a few wounds. Even were Mandela to have lived another lifetime into our future, there would still be work to be done. – Chris Bateman

Judith Sikade thought life after 1994 would mean escaping the shanty-town of Crossroads and living in a home with modern conveniences, but she’s still there, fighting for every scrap she has, moving from shack to shack. Nothing has changed. “Where’s the freedom, where are the changes?” she asks. Economic apartheid remains in spite of the demolition of its legislative roots. Liberation has seen no broad material gains for the majority – black South Africans – who view the government’s failure to transfer land largely still owned by a white elite as a fundamental flaw. Township dwellers like Judith still cannot own the land they live on.

That’s the backdrop. In the foreground, chaos reigns at top government level as angry protesters want President Zuma sacked after disclosures of State Capture that have left the citizenry breathless with shock and surprise.

Official unemployment is at 28%, deep seated disparities in wealth have changed hardly at all. The government’s resistance to large scale land transfers was because they didn’t want to rattle international investors, yet today millions of black South Africans are chronically short of capital needed to start businesses. Black entrepreneurs literally have no property to use as start-up collateral. As Ayabonga Cawe, a former economist for Oxfam, the international anti-poverty organization, and now the host of a radio show exploring national affairs says; We never dismantled apartheid -the patterns of enrichment and impoverishment are still the same.” South Africa began the post-apartheid era facing challenges as formidable as those confronted by Europe at the end of World War II, or the Soviet Union after communism. It had to re-engineer an economy dominated by mining and expand into modern pursuits like tourism and agriculture, while overcoming a legacy of colonial exploitation, racial oppression and global isolation — the results of decades of international sanctions.

From 1998 to 2008, the economy expanded by roughly 3.5 percent a year, doubling the size of the black middle class. The government built millions of homes, extended the reach of clean water and electricity, and handed out cash grants to millions of poor people. But the global financial crisis of 2008 ravaged South Africa, destroying demand for the mineral deposits at the center of its economy. It wiped out half of the roughly two million new jobs that had been created in the previous four years. The New York Times feature paints a vivid picture of the astonishing contrasts in South Africa, brush stroking and counterpointing multi-racial crowds on the scenic Sea Point promenade and parks with the sun setting on a tiny glinting tin shack roof in a dusty and desolate Crossroads. It then powerfully illustrates the frustrations of a well-qualified young black entrepreneur from Durban, Siyabonga Mzulwini, an ambitious young business management graduate who entered the market full of hope and enthusiasm. His and other’s stories illustrate how to get things done in the new South Africa; get radical and forceful, or get close to the most powerful politicians – the scraps from their table can make you rich.

Mzulwini and his partners began operating with the same assets their families had owned during apartheid — nothing. They purchased a pair of lawn mowers, aiming to bid on government contracts to cut the grass alongside local highways. Time and again, they came away disappointed. One day, Mr. Mzulwini bumped into a college classmate who was working at city hall. “He told me that unless we paid a R10,000 bribe (about $737), we would never get any business,” Mr. Mzulwini recalled. “He said if I gave him the money to give his boss, his boss would open doors for us. That sum was wildly beyond reach. So, Mr. Mzulwini and his partner’s eyed another target — contracts to help build government-furnished houses within the township. They approached a construction company to seek a role as a subcontractor. Rebuffed again, Mr. Mzulwini and his partners linked up with a federation of businesses operating under the name Delangokubonya Sa — Zulu for “We’ll Believe It When We See It.” The group is a platform for would-be black entrepreneurs frustrated by the A.N.C. machine. Federation brethren descended on the township construction site and threatened to shake the scaffolding if workers did not cease. The disruption gained Mr. Mzulwini a spot in a government program training people for careers as bricklayers. The following year, Mr. Mzulwini and his partners secured three contracts to do brick work, netting profits of R70,000, about $5,150.“Being radical and forceful is what has given me hope,” Mr. Mzulwini said. He is less optimistic for his country. “The system,” he said, “doesn’t work.”

Read also: Hagedorn: ANC ensnared in its own poverty trap – and not smelling the roses

For a far wealthier Durbanite, Marcus Moloeli, 38, it’s more a matter of who he got close to. President Jacob Zuma, in fact. Raised in a Sharpeville in typical township conditions, today he lives in a gated community on verdant hills north of Durban. Below his two-story house are two garages holding a Mercedes and an Audi, plus a golf cart which he drives to the country club at the centre of the complex. Lounging on his sofa overlooking his private pool, he tells the New York Times how he moved from sharing a single high school textbook with 10 township pupils to talking his way into a technical school reserved exclusively for Indians. Doing post-graduate menial jobs in Johannesburg before delivering antique furniture, he volunteered for a government-run youth league. This morphed into a staff position for President Zuma, overseeing youth affairs. Two years ago, he began his own consulting business, with local government contracts, advising them on infrastructure management. Today he’s joined the ranks of South Africa’s black, Asian and mixed-race millionaires which have expanded to 17,300 from 6,200 from 2007 to 2015, according to New World Wealth, a consultant based in Johannesburg. What many of these people have in common are lucrative ties to government.  “For your business to survive and thrive, you must know a politician,” Mr. Moloeli says. His three children attend a predominantly white private school, where they take violin and golf lessons. He speaks of retiring at 45 so he can spend more time with them. “Government has in a way provided a space for most people to succeed,” Mr. Moloeli said. “If you are hungry enough, you can make it in South Africa. You can build a very beautiful lifestyle.”

Four years ago, Andile Lili, a then-37-year-old member of the Cape Town City Council, took up the cudgels on behalf of unhappy constituents in a ragged settlement carved into a garbage dump near the airport, improbably named Barcelona. Staff at the private company that collected the giant white buckets from below the public toilets had a strike and sewage was overflowing into the streets. People in Barcelona were angry about many things, from a lack of jobs to the absence of public transportation, but the sewage was the final affront. Their circumstances stemmed from an economic decision made in the first years of the post-apartheid era. Faced with the imperative to turn black political empowerment into material gains, some within the A.N.C. called for the townships to be dismantled while resettling people near cities. The townships were ghettos of isolation, full of leaky roofs and dangerous wiring. Better to build new housing connected to transportation, putting people near jobs. But Mr. Mandela, as president, argued that South Africa could not wait for new development. He opted to upgrade existing homes while expanding the townships by purchasing land. From 1994 to 2004, the government built close to two million new houses in townships and informal settlements. Says Alan Hirsch, a senior official in the Trade and Industry Department during the Mandela government, and now director of the Graduate School of Development Policy and Practice at the University of Cape Town; “We basically compounded the problems of apartheid by buying up all this cheap land as far out of the city as possible.”

But back to Mr Lili and his overwhelmed and frustrated constituents. He rallied them together to move some of the sewage from their front doors to the entrance to the Cape Town City Hall. Result? The sanitation problems were quickly addressed. Lili got a government-furnished house. When he upped the ante a notch or two by planning a protest march, two men arrived at his home and shot him in the arm and gut. He later took the New York Times on a tour of Barcelona, detailing the history of the drama. They were quickly surrounded by some 40 residents, all eager to tell their stories. One, a domestic worker who earns R220 a month, half of which goes on transport, and is raising three high school daughters, summed up her dilemma and that of millions of other township dwellers very neatly; “Our children are being born in the same situation I was born,” she says. “We still want to see this freedom.”