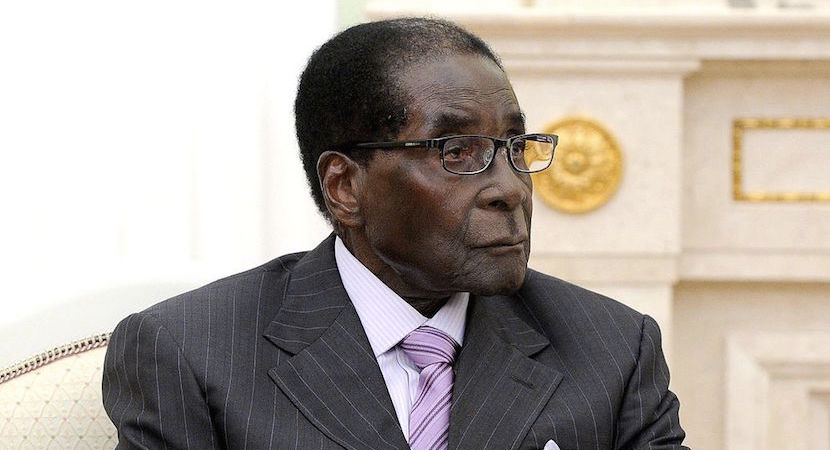 EDINBURGH — After the Zimbabwe military took control, many were surprised that Robert Mugabe wasn’t locked up in a jail or hurled in front of protestors delighted that a coup appeared to be underway. Instead, Mugabe resigned. He was offered indemnity from prosecution. The deal to get rid of the despot after 37 long years in which he ground down Zimbabwe into a failed state was quick and relatively painless for Mugabe. He shed a few tears, but he avoided the fate he had reportedly grown to fear: Dying after being captured after going on the run like Saddam Hussein or Muammar Gaddafi. Insiders explain to Bloomberg journalists what happened in the hours before Mugabe finally stepped down. – Jackie Cameron

The peril from the protesters was real. Three days before they’d approached the gates of his mansion, known as “the blue roof,” in the affluent northern Harare suburb of Borrowdale. Chris Mutsvangwa, a leader of veterans of the liberation war against white-ruled Rhodesia in the 1970s, threatened to unleash a fresh wave of protests when Mugabe, confused and tearful during his final days in power, didn’t immediately resign after thousands poured into the streets on Nov. 18.

For Mugabe, an almost president-for-life figure, the scenes were difficult to believe. He’d always been accompanied by a motorcade of heavily armed troops, decoy cars, police vehicles, motorcycle outriders and a fully-equipped military ambulance. But in recent years, the fate of figures such as Saddam Hussein and Muammar Qaddafi, both of whom died or were captured after going on the run, had weighed on him, according to the officials who spoke on the condition of anonymity.

Ailing health and frequent confusion hobbled Mugabe during the talks. He wept often and called out for his deceased first wife Sally, and Nhamodzenyika, his son who died of cerebral malaria as an infant, the officials said. His friend Father Fidelis Mukonori, a Catholic priest who was mediating talks with the military, consoled him and begged him to eat and bathe.

Mugabe’s decision to step down and end a week-long standoff with the military came as his ruling Zimbabwe African National Union-Patriotic Front was preparing to impeach him in parliament. It marked an anguished end to the career of Africa’s second-longest serving leader who had led Zimbabwe to independence in 1980 and dominated its political scene ever since.

Mugabe himself triggered the intervention, led by armed forces commander Constantino Chiwenga in the early hours of Nov. 15 when a week before he fired Emmerson Mnangagwa, his deputy president and long-time right-hand man during the liberation war and after independence. Mnangagwa, a 75-year-old former spy chief, has close relations with the security forces.

The dismissal was seen by many as a precursor to the appointment of his 52-year-old wife Grace to the position and opening a clear path for her to succeed him. Grace, known as “Gucci Grace” for her extravagant lifestyle, had infuriated members of the security forces by denouncing veterans of the liberation war and military leaders in recent months.

Mugabe’s resistance to stepping down buckled when he was told that Zimbabwe’s special forces had detained key allies and members of the spy agency, the Central Intelligence Organization. Again he began weeping and repeatedly asked what he could do to end the standoff, the officials said. Calls to army headquarters seeking comment weren’t answered.

His options were clear, the generals told him: Resign, be impeached or face the mob in the streets. And there was no escape, they said. Special forces had been deployed to Zimbabwe’s airports with strict orders not to let him or Grace leave the country.

The anger over Mugabe’s resistance to quit and the joy over the military’s decision to move against him were fueled by a collapse in living standards — the economy is half the size it was in 2000 — and soaring unemployment. Public services such as water provision are almost nonexistent and a crippling cash shortage has prompted people to sleep outside banks in order to draw as little as $20 when they’re restocked.

Read also: Lessons for SA: Where 37 years of socialism gets you. Just look at Zimbabwe.

In the end, it was the fear of suffering the same fate as Qaddafi, or the embarrassment of being impeached, that changed Mugabe’s mind, the people said. He signed a resignation letter penned on his behalf on Nov. 21 after the generals agreed to some of his demands for immunity from prosecution, the officials said. Negotiations for the final conditions of his exit continue.

An emotional Robert Mugabe finally agreed to end his 37-rule in Zimbabwe when army generals who’d seized power told him they wouldn’t prevent protesters from storming his home unless he relented, three people familiar with the talks said.