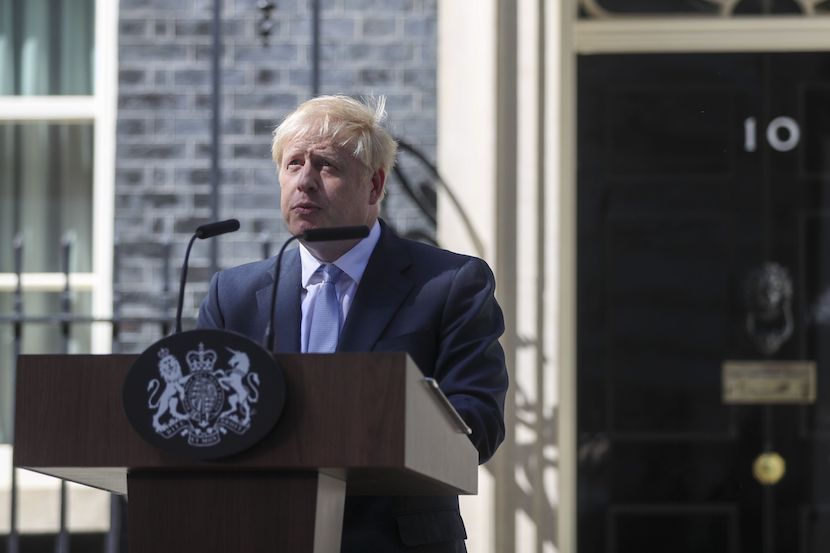 Newspapers headlines in London were pretty drastic about No. 10 Downing Street’s new resident this morning and included the following: “Night of the Blonde Knives”; “Ruthless Johnson takes revenge.”; “Johnson’s afternoon of cabinet carnage” and “Brexiteers take over”. They were referring to Boris Johnson’s decision to give most of Theresa May’s Cabinet their marching orders or should I say those who did not jump ship before the announcement that Johnson is the country’s new Prime Minister – 17 ministers were out on Johnson’s first day in office. Johnson described by the people who don’t like him as the “Blonde Buffoon”, because of his mop of blonde hair that he constantly ruffles has definitely made a lot of enemies. He is known for his social and political gaffes and the first one that he made hours into the new post is revealing that Queen Elizabeth told him, “I don’t know why anybody would want this job.” Johnson is convinced that he would manage to get a more acceptable deal on Brexit with the European Union that Theresa May failed to deliver and if he doesn’t, he has vowed that by the 31st of October the UK will crash out of the EU despite the fact that the business community in the country has warned that it would have dire consequences for the country. May I say that I don’t quite agree with SLR’s assessment of Johnson, Dominic Raab, who is my local MP, a firm Brexiteer in a very dominant Remain area or Priti Patel. For the British, let’s hope that the rational Boris revealed to SLR in Johnson’s books, his voting record, attendance record and I could add the record he now set on including women and minorities in his Cabinet, is the one that will prevail. Johnson is going to need a miracle to pull off a Brexit that won’t split Northern Ireland and Scotland off from the union and that won’t ruin the economy. – Linda van Tilburg

What warmed me back to Boris occurred some months ago, when a young Remoaner/Remainiac couple – neighbours to Boris and his girlfriend Carrie Symonds – sneakily recorded a private row from their own flat downstairs, called the police – then forwarded the tape to The Guardian. I had lost interest in the Conservative Party thanks to their appalling treatment of Sir Roger Scruton in April. But I also know what its like to be ganged upon by white, social justice warrior-ring, middle class, inheritance Londoners.

As I discussed with Alec on Tuesday, the worst period of Boris’ political career was his term as Foreign Secretary. According to insiders tasked with damage control, Boris was easily distracted, lazy and even sometimes callous – far removed from the enthusiastic, pragmatic Mayor of London he once was – a job he was significantly better at than his successor.

So why was he so rubbish? One suggestion is that he was deliberately positioned there to fail in a role that requires unconditional focus, learned diplomacy and the ability to listen for extended periods. Another is that he was still reeling from the fall-out of his snafu leadership campaign post the referendum result in 2016. The fact that his personal life exists in a permanent flux could, I guess, also be considered. 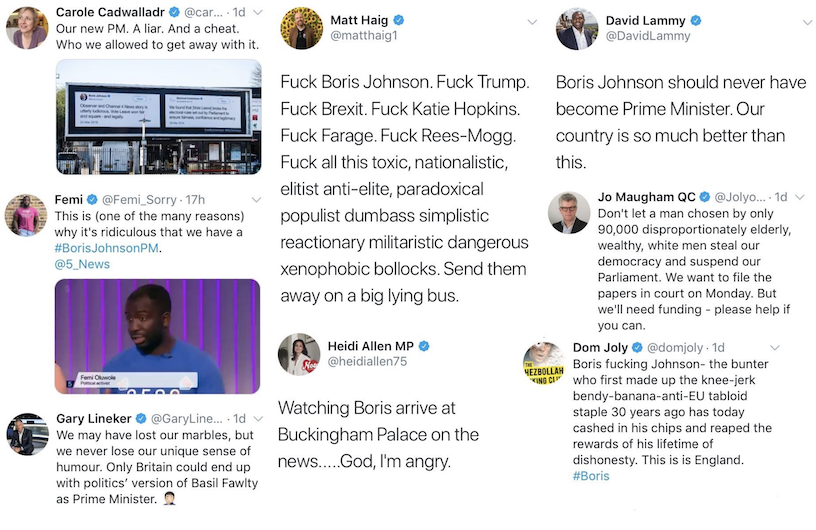 Despite volumes of shrieking disinformation to the contrary, Boris is no racist. Using inflammatory language in the pursuit of humour is attention seeking or infantile – but simply does not qualify as conviction that one civilisation is superior to another. I would hazard a guess that we’re about to witness a swathe of talented black people being rewarded with the important cabinet positions they deserve.

It’s Wednesday evening, a cruel 36 degrees – and there’s blood all over Westminster. I am delighted with news just in – my personal favourite, the best leadership candidate who never ran, Priti Patel, has been appointed Home Secretary. To understand how brilliant an appointment this is: remember the feeling you had when it was revealed that the notorious Louis Trichardt gangster Faith Muthambi had been appointed to chair a parliamentary committee? Now imagine the complete opposite.

A confrontation with the moaning, deluded woke dwarf Sadiq Khan is imminent. She’ll ruin him. His only strengths are, erm, ‘feminism’ and a self-publicity budget totalling hundreds of thousands of pounds.

Dominic Raab finds himself both Foreign Secretary and deputy. He’ll need his legal experience in the Middle East to address the issue with Iran. Happily accessibility here is not an issue: the de facto Iranian Ambassador to the UK, Jeremy Corbyn, also happens to be moonlighting as leader of Her Majesty’s opposition.

But more important than discussing other appointments, some of which are disappointing (eg. Brandon Lewis and Amber Rudd) is to note that unlike in South Africa – and the previous Conservative administration – ministers with actual experience of their portfolios are being picked according to that vaguely familiar term, meritocracy. In addition – against slurs of racism – the grandson of a Turkish Muslim is the Prime Minister, the daughter of Indian-Ugandan Hindus is Home Secretary, the son of Pakistani Muslims is Chancellor (nice one Saj) and the son of a Jewish Czech refugee is Foreign Secretary. But hell, let not these awkward truths impede mob outrages. Instead: fascists, fascists everywhere, and not a drop to drink.

It’s Thursday and still the blood pours. Rather than delighting at the end of Conservative ministers who were never even remotely conservative I think we should expose the repetition of a condition last witnessed in 2016.

In May that year Glenn Greenwald, founder of The Intercept, published this – [Spectacular Pundit Failure on Trump Is Worth Rem]

This week Guido Fawkes has published a collection of roughly same thing condition.

Reading through these hoity-toity predictions, judgements based on faux persecution, exaggeration, self-loathing, delusion, guilt, fashionable obsessions and most importantly – detachment, it is not surprising that the majority of comment I have seen from SA surrounding Boris and his newly assembled cabinet is negative, even pejorative.

There is an explanation for this: most of our conclusions are drawn from people like the ones featured in the photo. But they’ve got skin in the game. The harder, but more responsible way to analyse is to read Boris’ books, review his voting or attendance records. These might not alter opinions, but they could afford some patience against the outrage routine inspired by people and media who – as the above links reveal – have not the faintest idea what they are talking about.