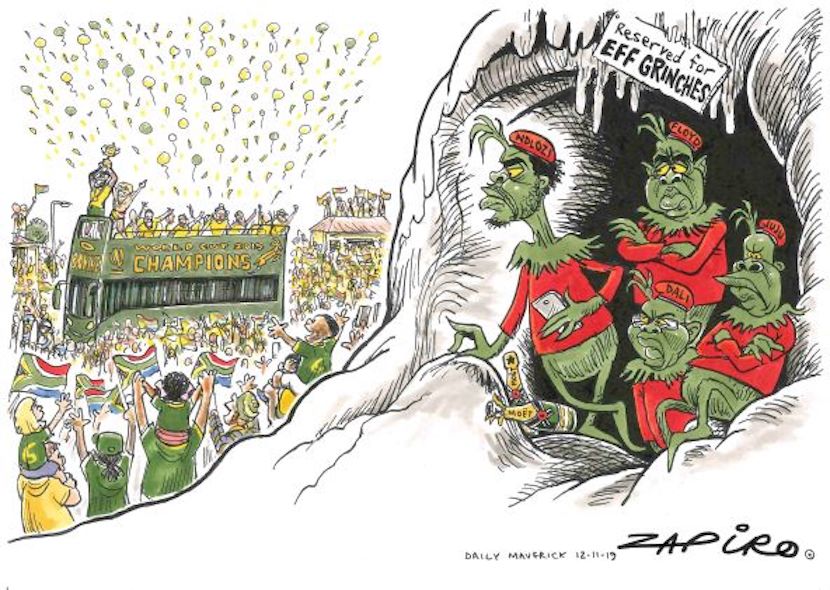 Many of the news outlets in our country have depicted Mbuyiseni Ndlozi of the Economic Freedom Fighters as the Grinch that tried to steal Christmas but did not succeed after his tweet shortly after the Springboks won the Rugby World Cup in which he congratulated Siya Kolisi but told that the others that they should get Prince Harry to congratulate them. For a party that is using identity politics to divide; seeing people of all races celebrating the victory together was a hard one to swallow and Ndlozi tried to snatch that moment away from celebrating South Africans of all races. His efforts to try and separate Kolisi’s achievement  from that of the other members of the team, did not succeed and South Africans came out in their thousands to cheer them on. Telling was how the Bok captain and Makazole Mapimpi refused to acknowledge any form of division. Simon Lincoln Reader sees Ndlozi’s response as a symptom of a wider world phenomenon of organisations “whose existence is entirely dependent upon provocation.” – Linda van Tilburg

In the two weeks that have passed since South Africa’s victory in Japan, the space afforded a political response has been largely occupied by remarks made by Mbuyiseni Ndlozi. The sense of disbelief that greeted them confirmed they are not the views of the vast majority of South Africans; they are, however, representative of a particular way of seeing the world, one allied to the great failed movements and institutions of our time.

If we are to fleetingly entertain some features of Ndlozi’s identity politics, then we must consider that the World Cup final was one of South African black excellence’s finest sporting hours. The tries belonged to people of colour; Lukhanyo Am, a phenomenally intelligent footballer, ensured Makazole Mapimpi’s try in the 65th minute. Roughly 7 minutes before the final whistle, the magnificent Am was on display again, slipping out of Maro Itoje’s clutches in a sequence that ended with Cheslin Kolbe scoring. Calculating just who did what would bring us to question exactly what made Ndlozi so angry, why he congratulated Siya Kolisi but demanded that Am, Mapimpi, Herschel Jantjies, Damien de Allende, Bongi Mbonambi, Tendai Mtarawira, and others present in the squad receive their commendation from the Duke of Sussex.

Convinced in the legitimacy of his insults, Ndlozi went on television to lament their poor interpretation, before squealing in Parliament that “the EFF was the party of Rhodes Must Fall”. At this point the answer becomes clear: Ndlozi isn’t just furious that vastly more talented people have succeeded, but they have succeeded outside the conditions the EFF’s view seeks to impose.

Much potential lies in the celebrations that extend some distance beyond sport, thanks to a group of people who have diminished the margin for political opportunism and division, and it enrages the EFF.

You aren’t required to subscribe to identity politics to be moved by the lives of some of the rugby victorious. Whilst Siya Kolisi’s upbringing is now known across the world, equally remarkable is Warrick Gelant, who comes from Hornlee, a place on South Africa’s garden route I’ve never heard the ANC or the EFF lobby South African tourism to promote in its brochures. Likewise Kylemore, the home of Herschel Jantjies, invisible on the maps of the Cape Winelands. Mapimpi has known astonishing depths of tragedy, but instead of expressing admiration for the heights he has subsequently ascended, and the almost unimaginable effort this must have required, people who think like Ndlozi thrust Mapimpi into a fatuous controversy the wing himself had to defuse.

Association with Ndlozi’s views can be located with ease across the world. In Sydney, a white, middle age female protestor announces to the camera that “white South African farmers deserve to be murdered because they stole the land”. In London, a prominent feminist writer opines that “the Paris terrorist atrocities of December 2015 were because of racism”: one of her supporters in America then suggests that incarcerating innocent men is necessary to dismantle the “patriarchy”.

Ndlozi’s words are representative of the way the BBC and much of the contemporary media thinks – the activist groups Hope not Hate and the Southern Poverty Law Centre too, organisations whose existence is entirely dependent upon provocation. The similarities between Ndlozi’s reflections and the anti-semitic/Momentum ranks of Labour (Jeremy Corbyn’s strongest supporters) are unmistakable. There is Extinction Rebellion, Antifa cults, Neo-Nazi movements across the continent and the extremes of the Pro-EU Remain and Leave groups. Just last week in London Hillary Clinton and her brutal daughter were foist upon us; she sat defiant, admonishing those who disagree with her, perhaps her most reckless estimation yet that we’ve completely forgotten about the manipulation of the democratic primary in 2016.

In his desire to impress his boss, Ndlozi has cornered himself, probably beyond redemption, as have a great many associates across the world. But it’s unlikely those who might agree with his comments will do so forever; unfortunately it takes victories like the Springboks’ to reveal how identity politics has created unnatural obstacles in the road to common sense.