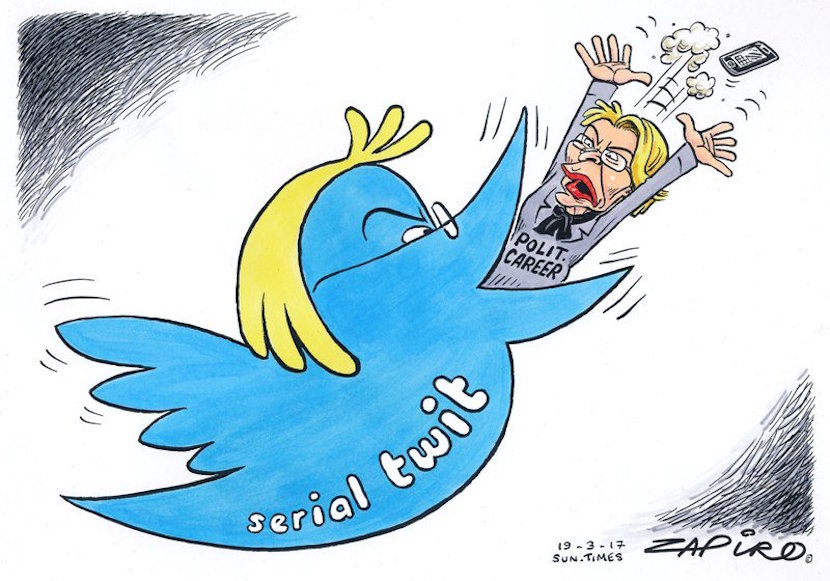 We live in an era of political correctness or some would argue that it has become extreme political correctness. People appear to be more easily offended and social media provides everybody with an instant way to express offence and attack those that they deem to be the perpetrators. Woke has become the word that describes this increased social awareness as well as action against racial and social injustice and it became the top trending word of 2019. Simon Lincoln Reader who is never shy to confront issues head-on, says this has led to a sweeping tide of intolerance that has overwhelmed common sense in universities and in a lesser extent the media. He also delves into the debate on Helen Zille’s love of Twitter and her decision to parody Meghan Markle and the Duchess’ commitment to “wokeness”. – Linda van Tilburg

SLR: Why Zille must not stop tweeting

There was a time when Helen Zille could do little wrong. But many of those who once supported the Democratic Alliance Chair are now pitchforking their way through lengthy, confected outrages and virtue projections, accusing her, amongst other things, of being a “right-wing reactionary” (this, from someone you have no reason ever to have heard of, called Ismail Lagardien, in the Daily Maverick, which incidentally suggests – as one of the reasons you should subscribe – that Zille hates it).

But if her record commands an undeniable political respect that her opponents, were they conscious of cause and effect, or less drunk, or prohibited from agitating upon the issue of race alone, could only dream of, then what has happened?

Examining Zille’s case reveals an answer within an answer: to understand how she came to be so reviled in certain quarters is also to acknowledge the sweeping tide of intolerance that has overwhelmed common sense in universities and to some but no less damaging extent, the media.

Zille has always had many “enemies” on Twitter; one that comes to mind is Simphiwe Dana. Although she appears to have since mellowed, at the height of the much publicized exchange (one that involved the impossibly stupid claim that “Cape Town is racist”), the singer used her Twitter account to speak in confusing parables about “Afrika” – akin to a pissed Disciple asking for directions.

A theory as pathetic as “Cape Town is racist” has seized Britain for the last week: “Meghan Markle is dispensing with her duties as a senior royal because of racism”. Resistance against this wildly stupid but undeniably popular suggestion has been led by the broadcaster, Piers Morgan, who has correctly pointed that the excuse of racism is useful only to disguise a series of underestimations on her part. The assumption that the British public would accept woke conjecture, and its mandatory hypocrisy, demonstrated poor judgment that the tax-paying public took exception to.

Morgan’s point was emphasised by Zille who replied to a one his Twitter posts with the words, “Woko Haram”.

Naturally the internet reacted swiftly, this time led by someone Justine, whose profile photo is of her holding a microphone, symptomatic of one of the great narcissisms of our time. Justine announced she would not be voting DA ever again – others, including some high profile writers, then reposted the exchange in pursuit of the same objective that accompanies all virtue signalling: the desire to be received as morally superior.

But was Zille wrong? No – parodying the Duchess’ commitment to “wokeness” by associating it with a similarly intransigent movement was not only entertaining, but closer to the truth than her critics would dare confess.  In both its theory and practical applications, the idea that someone is (or can be) attuned to bigotry, that its concomitant anger and terms of reference are acceptable features of modern life, is social terrorism.

In the same week of Zille’s latest fauxrage, the University of Sheffield in the UK posted a job offer: students would be paid GBP9.34 per hour for monitoring “micro-aggressions” on campus. These things are racist, apparently, and can be located in questions such as “where are you from?” and “why are you looking for things to be offended by?”. It is the commercialisation of the “safe space”, “lived experience” and pronoun conditions – the illogical conviction that the law isn’t enough, so it must be accompanied by Stasi-esque enforcement.

This extraordinary idea is unlikely to end racism and will more likely threaten the natural interactions required of young minds, who will caution from asking questions for fear of offending someone, and the inevitable trial by Twitter that follows.

Sheffield University’s model eliminates critical degrees of separation; applied to South Africa, the act of criticising Eskom could magically be interpreted as racist, therefore establishing a near perfect distraction from accountability from the ANC.

Zille knows this. She is the only South African politician willing to challenge the orthodoxy emerging from campuses, a defence against the narrowness being mainstreamed by certain journalists. On social media, a fixture that gets everything wrong, she makes the right comments, follows the right subjects, reposts the right thought leaders and but, most importantly, upsets the right people (my only criticism is that she has a habit of deleting statements).

So where did it go wrong for her? The answer is that it didn’t – and we must hope that it won’t. It has, however, gone spectacularly wrong for a great many others.