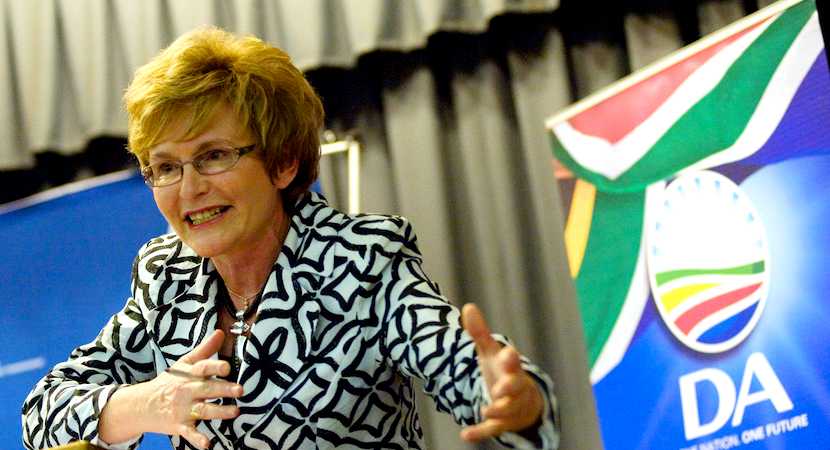 There was a time when DA-supporters were almost too scared to look at the latest tweet by former leader and premier, Helen Zille. She seemed to open her mouth just to change feet. The tweets that ‘the legacy of colonialism had not only been negative’ and more recently that ‘black privilege is being able to loot a country and steal hundreds of billions and get re-elected’ caused an uproar and Zille was branded as a racist. Even former Public Protector Thuli Madonsela, normally a calm voice in any storm called on Zille to withdraw the comment and to apologise. If you look at Zille’s background it is hard to reconcile the image of Zille as some see her today with the fierce journalist who broke the story about Steve Biko, who was a Black Sash and End Conscription Campaign activist and who according to a recent article by Max du Preez, harboured black activists sought by the Police in the apartheid era. It was after all Zille who grew the DA to what it was before she handed it over to Mmusi Maimane. In a response to all the criticism, Zille has written how she is sorry, not for her tweets, but that she had entered the ANC/EFF race narrative. And she is going to tea with Madonsela. This article was republished with the permission of Politicsweb and was first published in Rapport. – Linda van Tilburg

Where I went wrong

In the cut-and-thrust of politics, especially in the run-up to an election, politicians constantly talk about their past successes and future plans.

For years, I have wanted to write a series of articles about my mistakes and failures. I am, at last, free to do so.

It has been an interesting exercise, working through documents drawn from almost 15 years in executive office, trying to decide which of my many flops to analyse.

But today I begin this series by analysing what I perceive as my greatest failure as DA leader because it is the one that causes me the most anguish. It is difficult to analyse honestly, because I have to face a self-initiated betrayal of my life-long dedication to constitutionalism, non-racialism, and a culture of personal responsibility.

To make things easier for myself, let me first summarise the narrative on the “positives” of my leadership term: the DA more than doubled its vote in ten years, to over 4 million. We made the crucial transition from being a party of opposition to becoming a party of government. We demonstrated we could govern well. And where we achieved this, we established a lasting shift in voter patterns.

However, my greatest failure, by far, is that I did not fight hard enough to prevent the DA from entering the ANC/EFF’s “race narrative” arena. What’s more, I actually sometimes facilitated our entry and (even worse) proceeded to play their game.

It was a game we should never have engaged because it was impossible to compete, and undesirable to win. The rules of this game meant that winning would strip us of one of our primary reasons for existence – to promote genuine and inclusive non-racialism.

That has never been the ANC’s objective, and no-one should be fooled into believing it is (or ever was) beyond the symbolism projected by former President Nelson Mandela. This much was already evident to me in my political involvement 30 years ago. Rarely in history has there been such a disjuncture between the personality of a President and the reality of the organisation he led.

I am aware how risky it is to write about this particular failure of mine in the current climate because my words are almost guaranteed to be wilfully misinterpreted and manipulated.

One of the reasons for this is that the ANC has successfully consolidated a huge weight of public opinion (particularly among political commentators) behind the idea that the pursuit of racial representivity, as an end in itself, is a noble goal.

This inevitably means prioritising a person’s immutable biological characteristics above other attributes necessary for value and accomplishment. Among the many morbid consequences of this approach is that it inexorably degenerates into a smokescreen for cronyism, corruption and the criminal, captured state.

So how, exactly, did I set off down the treacherous path of trying to satisfy our ANC opponents on the issue of race?

It started with the conscious pursuit of diversity, which I still strongly believe is a noble goal in and of itself. It is essential in a country like ours, and increasingly world-wide.

Diversity is very different from representivity in that it does not seek to reflect the precise demographic composition of society in the make-up of an organisation. It requires genuine opportunities and real support for people from all backgrounds, with the talent and commitment and work-ethic required to progress in life.

Representivity, on the other hand, pays little attention to broadening opportunities. It focuses primarily on manipulating outcomes to reflect society’s racial demography. This inevitably requires quotas that make genetic, biological characteristics an impervious career barrier (for some), or a runway for others, irrespective of their other attributes. 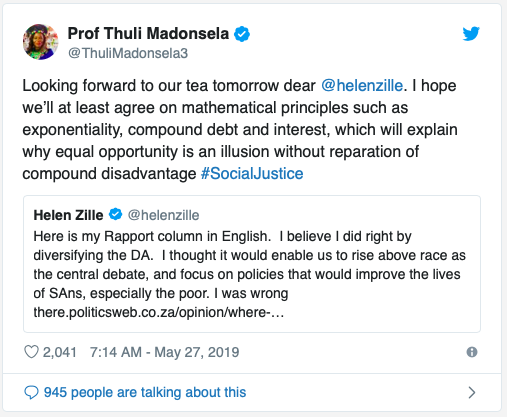 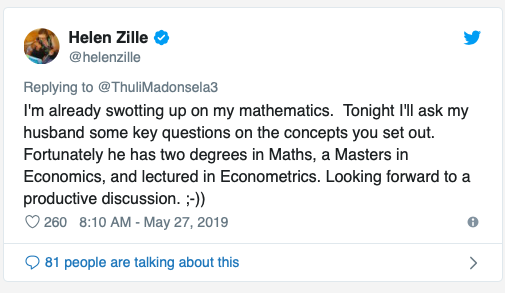 This is an approach which the DA has always rejected entirely (and I believe still does).

But the critical nuances of this debate are lost when you are playing against a dominant team whose aim is total racial hegemony, and whose race narrative is established as the moral yardstick in much of society at large.

Let me be clear: when I became leader, it was crucial to diversify the DA, and to change its style. We had to cross boundaries in our complex, divided society and convince South Africans that the DA’s policies and principles would provide the best foundation for successful governance in the interests of all, especially the poor.

But I hadn’t anticipated one crucial unintended consequence: the more I worked to diversify the DA, and the more successful the party became, the more our opponents accused us of being a “white party” (with the backing of the usual media chorus).

Eventually, I concluded that, if the party was led by a black person, and backed by a significant majority of elected black provincial leaders, we would finally rid ourselves of this tag.

And it would become far easier to cross remaining barriers into new voting communities, while remaining true to our principles.

I was wrong. The more diverse we became, the more stridently our opponents resorted to the race card. They had nothing else.

Trying to win this argument is, as Tony Leon once said, like feeding steaks to a crocodile in the hope that it will become vegetarian.

By the time I stepped down, we were well and truly into the game that I can only blame myself for initiating (even if there were important and valid reasons for doing so).

Let me emphasise that this self-criticism is not intended as a negative reflection on any of the DA’s black leaders. The ANC would have continued to escalate the race rhetoric even if they had been able to walk on water.

So when the ANC and its fellow-travelers continued describing them as Zille’s “puppets”, the strategic logic I had initiated inside the DA’s inner circle moved to the next logical step, encouraged by advice from an American “expert” (straight from the world capital of identity politics).

The DA election strategists (ironically most of them white) concluded that if they could crush me publicly, we would truly, at last, lose our “white-party” image. This is not a conspiracy theory. I have a document that was circulated to the Federal Executive, explaining it.

The immediate “casus belli” was a statement I made, in a series of tweeted observations on my Lessons from Singapore, that the LEGACY of colonialism was not ONLY negative. This has been said scores of times before, by black South African leaders including Nelson Mandela, and appears in many post-apartheid history textbooks authored by black historians. It is a statement backed by almost every respected historian in the world.

But because it caused offence to our political opponents (most of them elite, university educated devotees of identity politics who would never vote for us anyway), the DA seized on the chance to further “purify” the party.

I was suspended, and when this still didn’t work, they tried to entice me to leave South Africa. The DA even found a donor to generously sponsor their strategy. If I disappeared, they reckoned, the party would at last be seen as “transformed”.

When I politely declined to resign as Premier and leave the country, I was banished from all party activities.

During the election campaign, when the polling started reflecting problems, the party approached me, through an intermediary, to request my assistance. I immediately agreed, and was duly trotted out in scores of meetings, events and interviews, across three provinces.

Unsurprisingly, as soon as the last ballot was counted, the party took their finger off the pause button of the “crush Zille” strategy.

I say this not to play the victim. I have only myself to blame. I was the one who saddled and mounted the Tiger. I thought we could manage it. When I dismounted it attacked me. What did I expect?

I can already hear the chorus of critics shouting that I only have myself to blame because of my Tweets. Here again, I disagree: my most recent tweets were precisely geared at exposing the fallacy of racial generalisations, and the double standards that lie behind the dominant narrative of identity politics (which involves laying sole blame on minorities, for the country’s problems).

I would have thought that my attack on hypocrisy and double-standards would have dove-tailed comfortably with the DA’s script. Liberalism 101. But I had again committed the ultimate sin of offending our opponents (whom it is our first duty to please).

I certainly have a lot to answer for. But not for the reasons most commentators think. And I intend to spend the rest of my career in the political domain seeking to make amends and being true to my belief in an inclusive form of non-racialism.