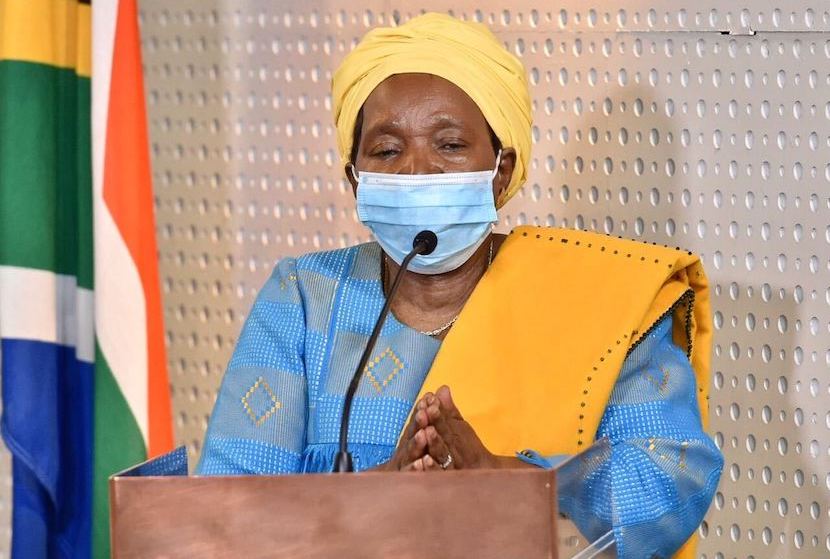 You couldn’t call this SLR column pure satire because it mixes parody with unexaggerated facts that would be funny, were they not so tragic. The predictably inflexible subject of his ire is non-other than our Minister of Cooperative Governance and Traditional Affairs, Dr Nkosazana Dlamini-Zuma, whom he labels ‘sclerotic,’ a carefully-chosen medical term that accurately describes her rigidity and many of her perplexingly stubborn responses to the Covid-19 pandemic. He reminds us of her Zuptoid links and woeful performance as African Union Commissioner to answer those who may still be puzzled by her utterances and decrees. In Simon’s opinion, she’s the poster girl for non-accountability, having been the proxy for her dethroned husband in the narrowly contested ANC presidential leadership race. Perhaps he sums it up most kindly when he says that, ‘she’s not an appalling person. Just cursed with an agonising lack of self-awareness.” Which begs the question of whether it’s that, or the ANC’s record of not holding its senior ministers and members to public account (they hold them strictly to party account), as in this recent assistant editor’s quote; “they don’t trade on skills or governance, efficiency or endeavour, but on politics and patronage.” It may well be both. – Chris Bateman

When it was announced that Dr. Nkosazana Dlamini-Zuma (NDZ) would play a central role in the country’s response to the pandemic, strange noises could be heard in support. “YAAASSSS”; “my KWEEN NDZ” and; “unlike America and DRUMPF, we R LED” were some of the comments.

To her credit, Dr. NDZ wouldn’t be enthused by this kind of millennial speak. She belongs to an older order of political incompetence, where politicians are just useless – as opposed to being useless AND campaigning for gender-neutral flavoured bathrooms in Palestine, like Kamala Harris in the US, or Dawn Butler in the UK. Here at least we owe her: a Dr. NDZ that featured the more revolting expressions of social justice would be unbearable.

People were frightened, so the adoration could be afforded the benefit of doubt. But other than that there’s no excuse for believing that her participation would relieve the country of its anxieties.

The researcher Gareth van Onselen once described Sarafina 2, the controversial sequel to the Broadway musical, as “the original Nkandla”. It was this and more, occasioned within a department where Dr. NDZ sat at the top. Whereas the arms deal was layered in complexity and funded by sophisticated European institutions, the original Nkandla provided the designs for smaller scale looting, the kind that would be seized upon by municipalities and smaller branches of government in the future. The original Nkandla also mapped the route to no consequences; more sensible countries would have immediately terminated the command authority of ministers involved in such a disaster. But the original Nkandla demonstrated, perhaps for the first time, the ANC’s unwillingness to investigate – let alone prosecute – its own, encouraging sympathy where there should have been scrutiny.

There was no sympathy from the former chair of the Nigerian Human Rights Commission when Dr. NDZ’s term as African Union (AU) Commissioner ended in 2016. Writing for The Times that year, Chidi Anselm Odinkalu remarked: “During her tenure, Africa confronted multiple social challenges: Ebola in West Africa; Yellow Fever in parts of Southern Africa; climate change and food security around the Sahel and Horn of Africa, as well as an international migration crisis. On each and all of these challenges, Dr Dlamini-Zuma was out to lunch or blissfully missing in action.”

But no embarrassing attacks from a respected activist could deter the role already decided for her as proxy for the notorious schemes and ways of her ex-husband. It was a vindictive, desperate move by Jacob Zuma’s supporters and equally, an illustration of just how stubborn Dr. NDZ had learned to be.

By that time the damage had already been done in ways we seldom examine. In one of the only credible observations to have emerged from Beijing24 in recent years, deputy editor Pieter du Toit noted the behaviour of Stella Ndabeni-Abrahams and the rare surfacing of consequences within the ANC. “Ndabeni-Abrahams, and many ministers in her league, such as Fikile Mbalula and Lindiwe Zulu,” du Toit said, “don’t trade on skills or governance, efficiency or endeavour, but on politics and patronage.”

But du Toit didn’t go far enough. Indeed, successive generations of choice grade thinkers have crowded cabinet and the parliament, but they had to learn from somewhere. In the legacy of the original Nkandla these people found their high priestess – and the convenient style of pedestrian, sclerotic and paranoid politics.

Which explains why the response to the pandemic has mutated into infantile, self-destructive fiddling with the levers of power – temptations too attractive to resist in the circumstances. Long before Covid-19, the American social theorist described so much of the world at present: “It is hard to imagine a more stupid or more dangerous way of making decisions than by putting those decisions in the hands of people who pay no price for being wrong.”

There is no real evidence to suggest Dr. NDZ is a criminal. The photograph of her with an alleged tobacco smuggler does not spell allegiance to state capture as much as it betrays the kind of absentmindedness the UK Labour Party’s former leader Jeremy Corbyn was frequently guilty of. She is not an appalling person. Just cursed with an agonising lack of self-awareness.

As she continues to defend some of the now near indefensible parameters of lockdown, it’s worth revisiting 2015. One of the reactions that forced her ex-husband into a humiliating reverse, having just sacked his Minister of Finance, came from an unlikely source. The Chinese. Sensing their interests were now under threat, they called Pretoria to read a few lines from the riot act (though they were never credited – and Jacob Zuma was to later accuse the leaders of banks of bullying him).

Theoretically, if things got so bad and China was to repeat the intervention, the spectacle of a country – partially responsible for the mess – seen assisting in cleaning up another country’s response to it would be the most fitting summary of Dr. NDZ’s political career to date.