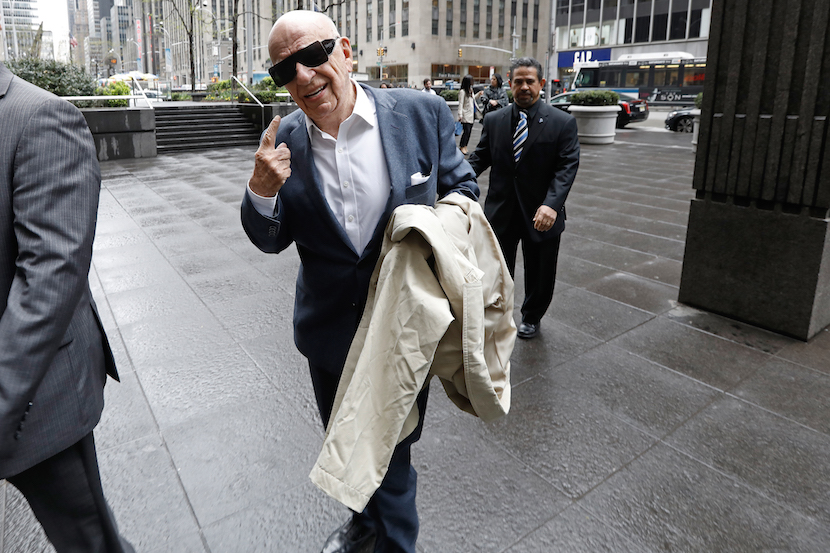 Australian-born media magnate Rupert Murdoch is the founder of News Corp. He owns The Times, The Sun and The Sunday Times, as well as a stable of Australian newspapers, including The Australian, The Daily Telegraph and The Herald Sun. In his 89 years on earth, Murdoch has become an incredibly powerful businessman and a renowned political influence, collecting friends and making just as many enemies. In August, Murdoch’s younger son James resigned from the board of News Corporation citing a number of strategic and editorial differences. “Whilst Murdoch Senior has pledged support for Donald Trump, James Murdoch has reportedly contributed hundreds of thousands of dollars to the campaign of Democratic rival, Joe Biden,” writes BBC News. Now, the BBC has released an intriguing look into Murdoch’s rise to power, and what it took to build his media empire. In this piece, Simon Lincoln Reader questions how objective the dramatic account really is. – Claire Badenhorst

The Rise and Rise of the Murdoch Dynasty

For its three part docudrama, The Rise of the Murdoch Dynasty, the BBC didn’t interview anyone who likes Rupert Murdoch. Contrary to gossip there are a great many people who feel a genuine affection for the media tycoon, but instead, and true to form, the producers got three of the most unlikeable personalities in Britain to feature – as former editor of the Sun Kelvin McKenzie described them – “Hugh ‘mine will be a blowjob’ Grant, Max ‘mine will be a painful one across the buttocks’ Mosley and Tom ‘mine will be a fantasy pedophile ring’ Watson” (the shameless, discredited former deputy leader of Labour).

It did this for two reasons. Firstly, sneering grifters are at their most vindictive when exposed; as the corporation will soon be stripped of its existing funding model, it’s going for broke and secondly, Rupert Murdoch is one of the reasons behind its waning popularity.

Calling a spade a spade

Tellingly, the producers clearly considered that an unflattering portrayal of family drama, over-hyped corporate scandal and one particularly devastating humiliation, from which Murdoch has since recovered, would align with the acclaimed series Succession. But this is a misinterpretation of a long established curiosity.

“We’re not interested in how Rupert Murdoch lives. We’ve only ever wanted to know how he thinks.”

In what was one of the West End dramas I’ve ever seen, James Graham’s “Ink” revealed some extraordinary forces at play in the pursuit of attention. The play goes back to 1969, and the young Murdoch’s ambition for his recently acquired Sun to destroy its opposition, the Daily Mirror. But events on London’s Fleet Street were a distraction: Murdoch’s main objective, as becomes apparent, was to try and see the future.

At the time, America’s west coast intelligentsia was greasing off its psychedelic love-ins and would soon be attempting to insert hallucinations into policy. Renewed interest in Marxism, courtesy of The Frankfurt School, was catching in Europe. Murdoch realised that these were nothing more than reinvigorated expressions of groupthink designed to devour initially supportive media.

He would resist these advances by playing to instinct. Opponents in Britain would accuse him of destroying the working class, of sleaze and racism; later in America, he would be accused of voyeur journalism. But for Murdoch appealing to impulse was safer than exploring new paths toward the same kind of supremacy it had taken another world war to end. Today’s events by fringe obsessions and conformity refer: he predicted parts of our present with unnerving accuracy.

But understanding Murdoch’s vision appeases only some of the curiosity. The rest is located in a question: if Murdoch sought to resist powerful forces of thought, did his response enable them to the point where they are today?

Perhaps the best answer to this question (again, another that the series failed to propose) is to study Murdoch and his relationship with US President Donald Trump.

Murdoch dismissed Trump’s early stage candidacy. But he was quickly schooled in the Victor Davis Hanson style of analysis (the mercurial military historian who diagnosed the first case of the disease we know today as Trump Derangement Syndrome). Fox News was the one cable media institution that chose not to rubbish Trump; instead, it would watch, and wait, ultimately proving to be stunning judgement – the same remarkable reading of public mood Murdoch had previously applied to the elections of Tony Blair and David Cameron – this time overshadowed by the involvement of the notorious sex pest Roger Ailes (who would eventually be sacked by Murdoch’s eldest son Lachlan).

But would Trump have been elected had it not been for Murdoch’s refusal to enlist media mob tactics? Would Britain have voted to leave the European Union? And under whose influence would the civilised world now be? The North American Man/Boy Love Association? The Tavistock Clinic? Open Society Foundations and its libtard fact checkers or Michael Mann and the climate industrial complex? Conversely, had Murdoch never existed, would there even be a need for the aforementioned? Are they themselves reflexes? Would the idealism of the 60s have plateaued into a reasonable set of checks and balances that undermined the need for people like Robin DiAngelo?

The great media scandal of the 2000s belonged to one of Murdoch’s titles, News of the World, but many culprits of the then common practise of phone hacking are still with us (some have reinvented themselves as morning television hosts). Murdoch was the prize scalp; a combination of stealth manoeuvring from the political establishment and the legacy media (see: the three unlikeable personalities) resulted in him being pinned down, shoved in front of a parliamentary select committee and assaulted by a protestor. Murdoch himself took responsibility, which is not something that happens in Silicon Valley, despite evidence suggesting that his youngest son James was the only member of the family who knew that NotW reporters were doing this.

Though this scandal and its consequences still stick, it wasn’t enough to destroy him. Barely a decade later and Tucker Carlson’s show on Fox News became the highest rated cable news program in television history (Murdoch and Carlson’s enemies, notably the hopeless personalities at CNN, were quick to try rinse the achievement. “His hate is infectious,” they remarked). The miraculously surviving Guardian and New York Times both witnessed woke rebellions that humiliatingly spilled out into the public; when something similar ignited at Murdoch favourite and Biznews.com partner, The Wall Street Journal, it was instantly, ruthlessly crushed.

Long before Hutton had completed this work, these were the foundations of Murdoch’s editorial policies.

“There must be space for sceptical views, and Hollywood and the media have no right to lecture anyone on anything at any point.”

This was not a declaration of war, but just enough space for any thinking man to breathe, and then choose.

So Murdoch led, others followed. His space continues to expand. The late Andrew Breitbart, a former leftist and researcher for Arianna Huffington, was once asked what his objective for his media upstart Breitbart.com was. He stared at the interviewer in icy silence before saying: “News, commentary, and the destruction of the political/media establishment”.