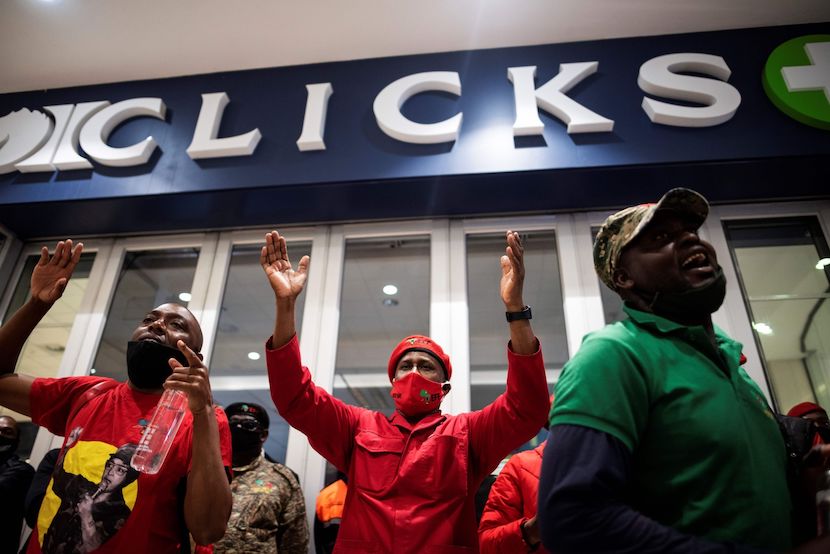 Retail store chain Clicks has hit headlines across the globe following protests against it in connection with a controversial advertisement. Germany’s Deutsche Welle tells its readers that the Clicks ad “compares a Black woman’s natural tresses with the caption: ‘Dry, damaged hair’ with that of a white female’s ‘fine, flat hair’. Protesters are accusing the retailer of racism and crassness toward Black physical characteristics and identity, it says. The New York Post tells its visitors Clicks made the decision amid outrage over the ad for shampoo brand TRESemmé. One shop in the municipality of Emalahleni was hit with a petrol bomb that caught a shopping cart on fire, according to local news outlet TimesLive. It quotes Economic Freedom Fighters’ leader Julius Malema, saying: “White people insult us and then they apologize, they think that’s the end.”  Satirical columnist Simon Lincoln Reader weighs in on the issue, in his latest SLR Diary from London. – Jackie Cameron

How much influence should parent companies yield over the activities of their brands? You would expect the former to act in the manner of benevolent guardians; surely – surely – checks and balances are erected to ensure compliance with common sense?

When it comes to Unilever, the Anglo-Dutch conglomerate, you be expecting too much. For the second time in three years, another Unilever brand has committed the equivalent of marketing brownface – gone full Justin Trudeau when the advice is clear: you must never, ever go full Justin Trudeau.

In 2017, Dove soap, a Unilever brand, made a stupid advert with a black woman who ostensibly washes herself with the product and emerges strawberry blonde (some would argue ginger, but that is a protected species). Clearly nobody thought there was anything wrong with this before it reached paper and electronic screen – not even a night watchman at the printers who might have stumbled over a proof during a 2am inspection and thought: “ohhh hang on, this doesn’t look good, best write down in the incident book so as to avoid, I don’t know, a race war?”

The theme of washing out “blackness” had the year before featured in, surprisingly, China – a country beloved by the political left, renowned for its impeccable human rights record. In that commercial, a black person had been put into a washing machine, the machine was switched on, and when it stopped, the head of a sparkling Chinese man emerged, like a new signing for an Asian Premier League club.

Of all the disgusting foods in the world, none come quite as foul as Ben & Jerry’s ice cream, made with petrol, sprinkled with asbestos, dry wool and some other ingredients – all inspired by the finest Eastern European sewage facilities.

The brand also belongs to Unilever. Founded by two crusty tree-huggers in Vermont, the stuff has been contributing generously to the obesity crisis since 1978, cynically tempered by aggressive if bizarre corporate activism in which the company has set itself the goal of being the wokest in the world.

In 2020 a vast number of African and Middle Eastern migrants have made the dangerous journey across English Channel – many of them victims of organised human trafficking gangs. But here, within a complex human tragedy, Ben & Jerry’s seized an opportunity to virtue signal.

“Hey @PritiPatel,” the tweet from the corporate account started, “we think the real crisis is our lack of humanity for people fleeing war, climate change and torture. We pulled together a thread for you.”

Also, there is not a single shred of evidence behind claims of “climate change” and “torture” (NOTE: a link to a Guardian article written by a pronoun enforcer does not qualify as evidence.

I knew this particular story had legs because I also knew that in 2017, and presumably in a strategic shift from using British vomit wiped up from the alleyways of Benidorm, Ben and Jerry’s were caught putting weedkiller in their products (glyphosate). Nobody told the purple haired one about this whoopsy – or indeed the one where Mexican migrant workers won an agreement to stop being exploited by the company [read: slavery] – so responses to the patronising tweet were painful to witness.

“Priti is working day and night to bring an end to these small boat crossings, which are facilitated by international criminal gangs and are rightly of serious concern to the British people,” a Home Office source said, “if that means upsetting the social media team for a brand of overpriced junk food, then so be it.”

“Get woke go broke, frozen Communist sp**k,” was another one. Well, quite.

Perhaps it would be considered more genuine were Ben & Jerry’s to launch a Chernobyl commemorative edition, say “Pork and Yellowcake Sludge” – in honour of those poor radioactive wild boar still ferreting around there?

Few companies in South Africa can boast the success of true, intelligent and long term transformation the way Clicks can. It has been the company of ordinary but accessible nation building, an old order of sound business practise surviving to ridicule the state capturers, the tenderpreneurs and other fly-by-nighters. In no way does it warrant being described as “a racist organisation”.

Perhaps it should have exercised more vigilance – but then so should have Unilever. The real culprit here is that toxic shampoo – Ben & Jerry’s for the scalp – which leaves the ultimate observation: I am convinced that almost all TRESemmé executives would consider themselves overtly non-racist, have recently posted social media messages in support of the world’s maddest insurgencies, at some or other point taken a knee and probably agree that Extinction Rebellion is a fabulous idea, led by geniuses.

Seen this way, this isn’t a story about Clicks. It’s about our direction of travel. It’s one of those moments where we’re taking a break in our descent to examine just how shitty our thinking has become. Like we’re at a Shell Ultra City or something, looking back, shrugging.