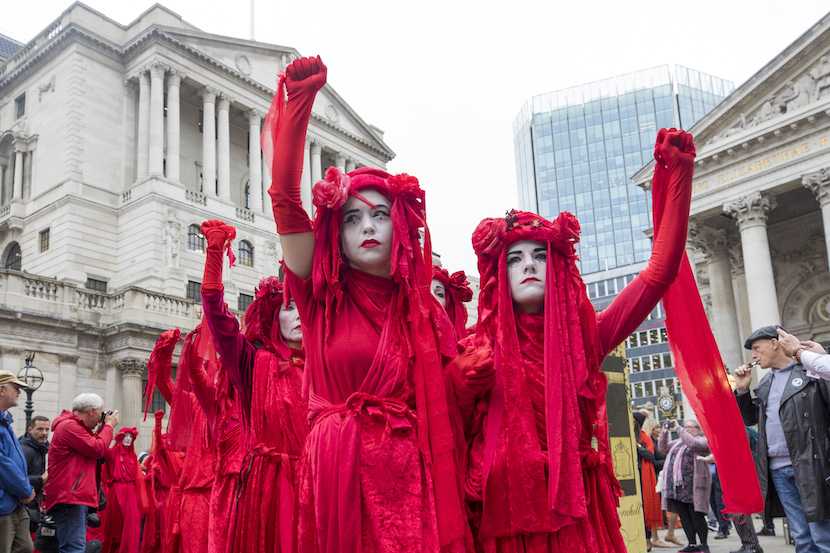 There are times when it is hard to move around freely in London, that is despite the Underground, buses, taxis and Uber, because the Extinction Revolution (XR) has taken over not only Parliament Square, the normal hub of protests but just about everything and everywhere. On a morning commute, workers may find that the bridge that they walk over daily is blocked or that even the cycle routes aren’t available and this week XR protestors decide to target the tube. It was met with an angry response and commuters at Canning Town dragged a protestor off the roof of a train. This was despite the fact that London had so far stoically accepted the protests, decided to enforce a ban. There is a point that I believe protestors like this who may have the sympathy of many people; who doesn’t want to do something about climate change; become so rabid and fanatical that they lose the support of ordinary people. I walk past them and wonder why do they have the time for the protests? It is all good and well to protest over weekends, but do they take time off work, do they have jobs and how do they support themselves? And if they are so fanatical about saving the planet; why do they leave so many plastic bottles and rubbish in the areas that they go to? In his column for Biznews, Simon Lincoln Reader examines the merits of the protest. – Linda van Tilburg

If the ranting of Sadiq Khan and Diane Abbott is anything to go by, criticising Extinction Rebellion (XR) will soon be made illegal. So whilst we have the opportunity, let’s examine the (increasingly tenuous) merits of the protest itself and the way we routinely entertain issues that do not warrant the status afforded to them.

From Trafalgar Square to London City Airport, Whitehall to Lambeth Bridge and Marble Arch, XR has for nearly two weeks now chanted and danced to the authorities and frustrated commuters. Largely peaceful, it has nonetheless defiled war memorials, sprayed fake blood over the Treasury, smashed windows at the Department of Transport. Curiously, it has impeded The Underground, which is the most environmentally conscious means of travel. At its most disruptive to date one of its members – a Paralympian who once refused a drugs test and was subsequently stripped of his medal – climbed atop a British Airways Embraer.

The mood darkened when the Nobel Prize for Peace was awarded to Ethiopia’s Prime Minister Dr. Abiy Ahmed Ali. One protestor explained: “it was supposed to be Greta,” he said to the camera, “she was overlooked by a panel of white men because Norway is a fossil fuel country.” This statement was unchallenged by the reporter, unaware that the panel member announcing the prize was in fact a woman or aware but conscious that suggesting Dr. Abiy won as he had brought peace to a region wrecked by war for 30 years was daft. Because Greta Thunberg, whether she likes it or not, is the movement’s global leader, thus protected from even remote scrutiny by its supporters with documented preference for insult and ridicule over adherence to science.

To support Greta without researching how she came to be is to declare that you are only prepared to accept half the truth and to reject this would be to reject actual history. For here we have the experience of someone who once commanded the support Greta enjoys today, Al Gore, whose actual series of predictions did not materialise within the time he projected and who is now reportedly close to becoming the world’s first “carbon billionaire”. To separate Greta from Greta’s message, as is encouraged and even in many cases demanded, would be to deny that someone like Al Gore ever existed.

If you believe that the matrix of vested interests should be equally applicable – from Nobel Committees to activists – you need look no further than “Scener ur Hjärtat”, or “Scenes from the Heart”, written by Greta’s mother and former Eurovision contestant, Malena Ernman, in which a troubling but nonetheless illuminating portrait of Greta emerges.

The book defenestrates the appalling theories – Greta is financed by George Soros, a front for the death cult Antifa and, perhaps the worst, a friend to ISIS. What it reveals instead are the trials that confront wired-in, modern families – especially trials provoked by psychological impairments, the origins of which could be located in the effect famous parents tend to have on their own children. By Malena’s own admission, Greta’s ascendancy is not so much the result of one family’s airing of their laundry, but the explosion of it.

There were noticeable difference between summer’s protests and these ones. The first was cosmetic – the absence of celebrity participants, perhaps cautious of being accused of hypocrisy in the way actress Emma Thompson was. The second was the response, one where police temporarily shelved their glitter and high heels so as to support the access of commuters and residents first. But the third difference was spectacular: on Twitter first, then on television and radio shows, the protest’s officials announced that the movement was departing from the conclusions of the Intergovernmental Panel on Climate Change (IPCC) scientists upon whose evidence the alarm has been sounded. Their new objective, they declared, was to dismantle capitalism. The children were not just kicking themselves out of the foster home, but sticking their fingers down their throats on their way out.

The protest is yet to end. The desperate behaviour of some of its officials implies that it has underestimated critical analysis and is guilty of assuming liberties with the sympathy and patience it initially won by divorcing itself from the very foundations upon which it was established. Furthermore, its attempt to include intersectional appeal has failed. Grievance has its own hierarchies and loyalties – to incorporate the supposed injustices of, say, the Muslim community, and direct these from within your own protest may sound clever…until you are told that not explaining what camping is to the new recruits, or better yet –  failing to provide the kit for them to do so – is racist.

Finally, Greta’s position within XR. In the example of XR’s departure from science, the concern that was so venomously intercepted by Greta’s self-appointed legions of virtual defenders has been vindicated. It was always rational, and sensible, to admire her courage but simultaneously express the opinion – and only the opinion – that the sight of a 16-year-old occupying this most perilous of terrains is puzzling, possibly not the place for someone with mental health challenges to find the happiness they almost certainly deserve. It was always acceptable to empathise, to appreciate her awkwardness in the way it bought back memories of one’s own at her age, all the while heeding association with XR and acknowledging that wild movements with shifting goals, from Black Lives Matter to Rhodes Must Fall to Occupy, habitually eat their own.