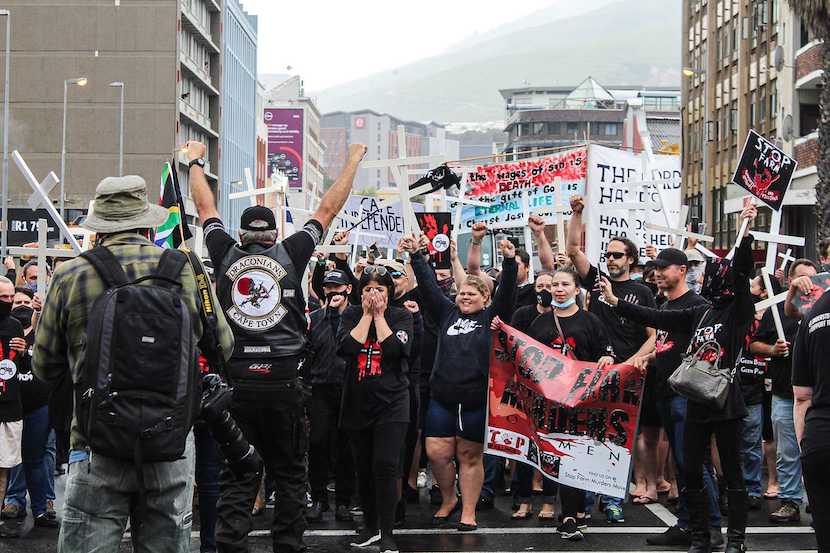 The dark clouds that hovered over the Mother city matched the mood of the moment, as protesters made their way to Parliament to express their anger and frustration about farm murders.

Chanting the words ‘die boere kom’, the demonstrators marched in the rain brandishing white crosses in honour of those who lost their lives.

National co-ordinator of Black Monday South Africa, Valarie Byliefeld, said the protest is about the farmers who are brutally attacked and murdered in South Africa.

‘The message we would like to give the world is that these farmers that are murdered – they weren’t just statistics. They were people. They had names. Parliament will know each farmer today, by their name.’

Farm murders are a hotly contested topic in South Africa, with many farmers fearing for their lives.

The procession gathered at the foot of the parliament buildings, where a number of speakers addressed the crowd.

‘Mr President, I have been to the scenes of a farm murder. I have seen the pain of 2,000 farmers. It is not only the attack and murder of these farmers, it is also the brutality of the attacks.’ said the provincial minister.’

Meyer went on to say, ‘Mr President, are you aware that farmers in South Africa contribute to 50% of all South Africa’s agricultural exports on the African continent?’

Meyer was met with applause and cheer, saying ‘an attack on a farmer is an attack on the South African economy.’

Founder and director of CapeXit, Des Palm, spoke about the state of South Africa. ‘We looked at it very holistically. We realised that South Africa is on a path that it cannot turn around on.’ We’re not going to save it. What we say is, let us save the Western Cape.’

Singer Danie Van Der Westhuizen addressed the crowd, too. ‘It doesn’t stop. The more we ask for it to stop, the more it goes on.’

Hundreds of people littered Roeland Street, the roadway lined by scores of motorcycles. ‘It’s just gotten out of control. No one in the government wants to take responsibility. It’s sad that this is what we have to do to actually have our voices heard. I have family that own farms, so it’s a concern. At the end of the day it is them putting food on our tables’ said one protester.

It doesn’t stop. The more we ask for it to stop, the more it goes on.

For others, the reality of farm attacks have hit a bit closer to home. ‘I suffer from PTSD because of the attack we had. My two children and I witnessed my boyfriend’s murder.’ said another protester.

Debbie Els from the Stop Farm Murders/Attacks Movement spoke of the urgent need for government to heed the call and stop farm murders. ‘Make it a priority. The boere need your help. It cannot carry on like this anymore.

Mr President, you must [do] this or you must [do] that. I’m going to tell you what you don’t want to hear. It doesn’t help to ask the president. He will do nothing about it.’ In early September, Deputy President David Mabuza released a statement condemning farm murders (read here), that outlined the importance of the lives of farmers, farm workers and farm dwellers.

A large, white cross with the names of victims took centre stage at the protest, with the intention for it to be displayed in memory of the victims who lost their lives.

Today, the DA joins a protest outside parliament to stand in solidarity with our farmers, farm workers – of all races, their children and their families against farm attacks!#StopFarmAttacks#StopFarmMurders pic.twitter.com/dybkYfLbIf