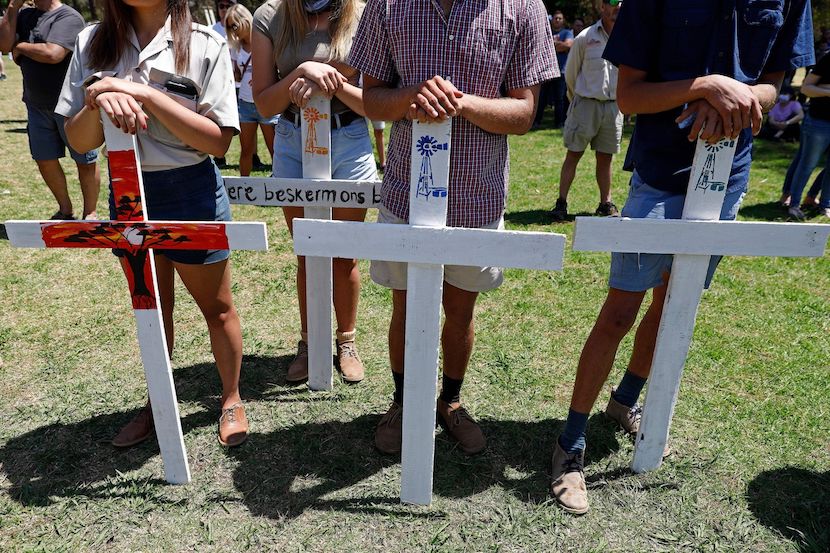 It is more dangerous to be a farmer than a police officer in South Africa, said FF Plus MP Pieter Groenewald in a heated debate on farm murders in parliament three years ago. While Groenewald understood that farm attacks did not only target whites, but that black farmers were also victims, he also gave examples of horrific crimes against white farmers in the country. Cope leader Mosiuoa Lekota was applauded when he said the right narrative on farm murders had to come from Parliament. President Ramaphosa’s subsequent comments in New York a year later were difficult to absorb when he said in a Bloomberg interview that “there are no killings of white farmers in SA. There’s no land grab in SA…” As per tweet below, the long-simmering crisis of farm murders continues to ravage South Africa. Ramaphosa has condemned the recent murder of 21-year-old farm manager Brendin Horner which he described as “an appalling act of cruelty” which “should upset every one of us”. “We should welcome the President’s genuine condemnation of farm murders; however, the situation relating to farm murders is, unfortunately, not quite so straightforward as the President would have us believe”, writes Dave Steward of the FW de Klerk Foundation. – Lindiwe Molekoa

746 days ago, Ramaphosa told the world that no farmers were being killed in SA. Yet in the year he made that claim, there were 394 attacks & 56 murders.

The long-simmering crisis of farm murders has come to a head following the murder on 1 October of a 21-year-old farm manager Brendin Horner at a farm outside Paul Roux in the Free State.

Horner’s body was found tied to a pole and the 21-year-old had injuries to the face and neck.

Only two days later police arrested two suspects, Sekola Piet Matlaletsa and Sekwetje Isaiah Mahlamba, in a township near Paul Roux. Blood-stained clothes and shoes were found in their possession.

The murder – following nine farm murders and 52 attacks in August and five murders and 48 attacks in September – elicited an unprecedented response from farmers, various agricultural organisations and AfriForum. On 6 October an angry crowd gathered outside the court in Senekal where the suspects were due to appear. According to reports, some members of the crowd tried to enter the court to seize the suspects. In the ensuing fracas the police used stun grenades to control the crowd – and the crowd overturned and burned a police vehicle.

The Freedom Front Plus denied that the protest was violent and contrasted the police’s rigorous reaction in Senekal with their lack of action when members of the EFF recently ransacked Clicks stores. AfriForum suggested that masked agents provocateurs “from the country’s safety services” may have swept up the crowd.

He vehemently condemned Horner’s murder which he described as “an appalling act of cruelty” which “should upset every one of us”. “No matter who we are, no matter what community we live in, no matter our race, creed or language, we should be as deeply affected by the death of Brendin Horner as we are by the many other South Africans who die violent deaths each year.”

However, Horner’s murder – according to the President – was simply a reflection of unacceptable levels of the violent crime that afflicts all South Africa’s communities. “While crime affects everyone, the majority of victims of violent crime are black and poor; and it is young black men and women who are at a disproportionately greater risk of being murdered.”

The President also condemned the protest at the Senekal court on 6 October. While anger at the senseless killing was justifiable, vigilantism was not and “…the spectacle of white farmers storming a police station to get to a black suspect” had “opened up wounds that go back many generations”.

He appreciated that “the farming community is an integral part of our economy. The farming community produces the food that we eat. Violent crime on farms poses not just a threat to the safety of our rural communities, but to our nation’s food security.”

He denied that violent crime on farms was part of an orchestrated campaign by blacks to drive white farmers off their land: “Numerous studies show that crime in farming communities is largely opportunistic.” “They are acts of criminality and must be treated as such.”

The President called on all involved to support the Rural Safety Strategy which “rests on greater coordination and better communication between the South African Police Service, business, farming organisations and communities.”

We should welcome the President’s genuine condemnation of farm murders; his acknowledgement of the farming community’s role in the economy and his call for all those involved to work with the government to make a success of the Rural Safety Strategy.

However, the situation relating to farm murders is, unfortunately, not quite so straightforward as the President would have us believe.

Firstly, land lies at the heart of the ANC’s NDR agenda. According to the 2011 Green Paper on Land Reform “All anti-colonial struggles are, at the core, about two things: repossession of land lost through force or deceit; and restoring the centrality of the indigenous culture.” The ANC calls for “agrarian transformation” which is “a fundamental change in the relations (systems and patterns of ownership and control) of land, livestock, cropping and community.” President Ramaphosa endorses this agenda – which clearly has far-reaching implications for white farmers.

A copy of the Bill can be found here: Expropriation Bill, 2020

So, fears of “an orchestrated campaign … to drive white farmers off their land” – one way or another – are not entirely without foundation.

Secondly, the murder of farmers cannot be viewed in the same light as other murders – because there are no calls by prominent political leaders to attack and murder any other class of people:

“Stock theft is rampant, and animals are slaughtered while they are alive. Carcasses are left behind as tokens of the barbarity… Private land invasions are common, where the farmer is terrorised if he takes action… Dogs are brought in by black syndicates to hunt cattle and wildlife on privately-owned farmland.”

Thirdly, “young black men and women” are not “at a disproportionately greater risk of being murdered” than white farmers. James Myburgh has shown in his masterful study of the relevant statistics that in 2016/17 white farmers were 3,2 times more likely to be murdered than the national average for all races. In the northern and eastern provinces of the country their murder rate was 6,2 times the national rate.

Finally, farm murders frequently involve extreme and gratuitous violence that cannot simply be classified as ‘economic crimes’ or opportunistic. According to an AfriForum study of farm attacks during 2019, 61% of incidents, where specific crimes were recorded, involved attempted murder; 7% resulted in rape; 9% of victims were tortured; and 21% culminated in murder.

So, it is clear that farm murders do constitute a special category of crime and deserve the special attention of government.

In the meantime, the tension in Senekal mounts: Both AfriForum and the EFF have announced that they will be at the Magistrate’s Court in Senekal when the two accused appear on Friday, 16 October.

AfriForum indicated that it will proceed with a peaceful protest against farm murders “to show their anger and dissatisfaction about the acts of terrorism on farms” and that they will not be silenced by “the provocative behaviour of the EFF”.

The EFF will also be present: – Julius Malema has warned that “if those people (who were involved in damaging state property on 6 October) are not arrested, we are going to incite the civil arrest. We will look for them, we will arrest them ourselves and hand them over to the police.”

Under these circumstances, all those involved should heed President Ramaphosa’s warning to resist any attempts “… to use crime on farms to mobilise communities along racial lines.”

We should also accept his call for an “open and honest debate” on the “festering wound” of race relations in farming communities. We need such a debate: but it must be truly open and honest. It must address core questions relating to the ANC’s real intentions with land reform; the implications for the future of white farmers; as well as the need for effective action to protect the lives and property of our farmers.