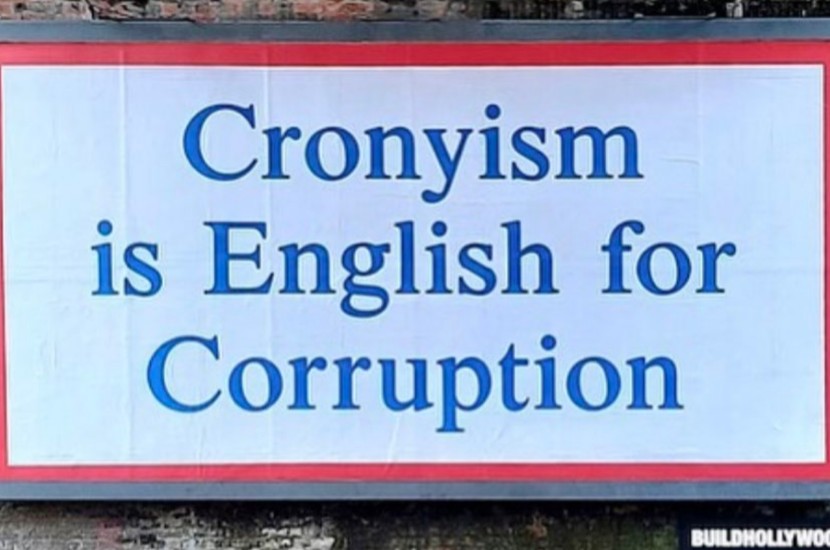 Simon Lincoln Reader has a roundup of the Corruption Chronicles this week. Although the central character in each chapter is different, they share many traits. The power-hungry bury themselves at the centre of large corporations, confident they will never be caught. When their fortresses collapse, hollowed out by greed they’re prone to finger-pointing and protest. In a familiar unfolding, Sir Bernard Hogan-Howe who was once head of London’s Metropolitan Police as Commissioner was also found to be associated with Greensill Capital. – Melani Nathan

The day the ghost of Jackie Selebi came to haunt London

The ghost of Jackie Selebi came sniffing around London last week, spotted in that slimy corridor linking Whitehall to the private sector. There is no doubt it was Jackie: reports claimed that the ghost was mumbling, slurring, hiccuping then saluting for no reason (badly) and kicking its heels before marching up and down with its pants buckled below its armpits. But at least it was happy – and that is because it had come to haunt the latest high profile official to be implicated in a fistful of greasy cronyism.

That man would be Sir Bernard Hogan-Howe, who, despite being notoriously thick, once held Jackie’s equivalent rank in British policing. Sir Bernard was the latest high profile name to be associated with Lex Greensill, founder of Greensill Capital that collapsed earlier this year.

I briefly shared an office in Charles Street with a nice man from Perth who boasted an intimate knowledge of Australian wide-boys. He had even once shaken the hand of the original piece of work, Lang Hancock, father of Gina Rhinehart, at one point the richest woman in the world. “With Hancock,” he said, “you sort of knew you were going to be disgusted and offended – but at least you left with your shirt. With this guy, it’s the shirt – then later you discover it’s the watch too.”

That was an uncharitable description of Lex Greensill, but all the same, an indication that long before his company cratered he was considered fast. Arriving in Britain in 2001, he embarked upon the standard circular banking route working for all the majors before establishing Greensill Capital in 2011. At some point thereafter he met former Prime Minister David Cameron; before long he became a ‘Senior Downing Street Advisor’ – a position that came with an embossed business card and an email address.

Before Sir Bernard was revealed to be on Greensill’s payroll, Cameron was hogging all the attention. In what appears to be the work of a leaky mole at the heart of the UK Civil Service seeking to exact revenge for Brexit, it has transpired that last year, at the early onset of the rona, Cameron was exposed lobbying for Greensill Capital to receive a custom bailout. Rishi Sunak, Chancellor of the Exchequer, responded to one of his multiple text messages: ‘Hi David, I have asked the team to explore an alternative (solution to a government bailout). Best, Rishi.’ Cameron was formerly a TV PR man, which would probably account for appallingly bad judgement here. But there was a catch: he didn’t like Lex because of the latter’s soft hands or because he whispered Arabic poetry into his ear that time they were guests of the Crown Prince eating camel in a tent outside Riyadh: he held stock in Greensill and stood to make up to £60m.

Both Sir Bernard and Cameron have welcomed an enquiry, such is their confidence in deliberately narrow terms of reference that (always) make an adverse finding impossible. The spectacle of a public enquiry brings only; extravagant cursive on vinyl; a media production frenzy; opposition politicians uninterested in public interest using the occasion to slutwalk themselves – all accompanied by some theatrical lawyering, and perhaps an affair or two between staffers. Tony Blair had one of these things – today he’s even more emboldened than he was about WMD. The Leveson Inquiry involved the media – all that came from it is a man who likes to dress up as a gimp and swear at hookers in German.

There’s no social distancing at the top of today’s Tammany Hall scheme. Health Secretary Matt Hancock – a man who would ordinarily be an indistinguishable clerk sucking a desk at an accountancy major were his nostrils immune to the scent of power – has been revealed to have shares in a shredding firm among whose clients the very NHS sits. Representing the party of the KKK, there’s Nancy Pelosi, who managed to pull herself away from the vodka cabinet long enough to invest $10m in Microsoft stock in March. In a sensational coincidence less than a month later, Microsoft just so happened to be awarded a defence contract worth $21b over 10 years (she did a similar thing with Tesla). Her investment strategy is sharp: when she is asked, ‘do you ever worry that us peasants might suspect you of insider trading’ her response is: ‘do you know that there is systemic racism in America?’

So what’s the difference between Norbet Agliotti holding court in La Campagnola near Bryanston, shoving bowls of spaghetti into his face, spilling vino Rosso on his white jacket, roaring about how he could phone Jacob Zuma right there – and a smartly dressed Australian handing over a bunch of share deeds.

It’s the same difference between former UK Diplotwat Michael Shitser’s stories about guns in Johannesburg and feral youths in dirty grey tracksuits hacking at each other with machetes in London’s tube stations.