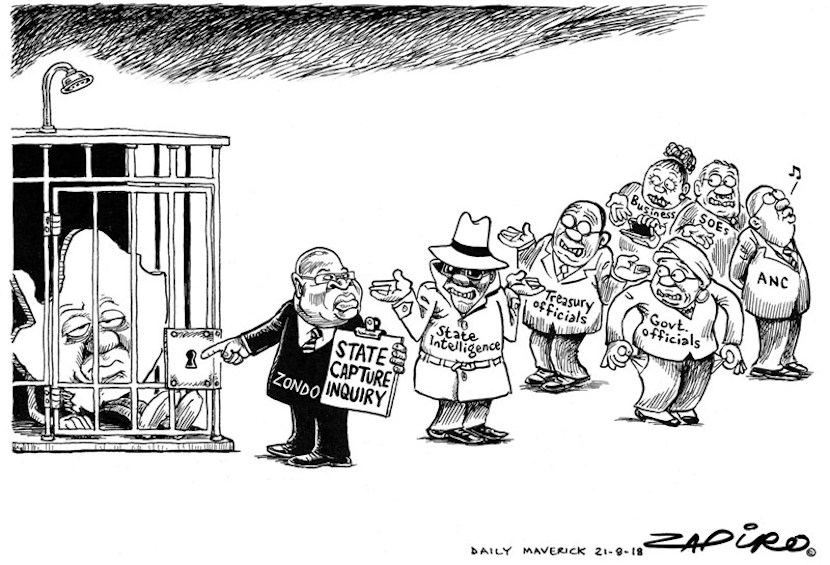 Director of Accountability Now, Paul Hoffman, unpacks the findings and implications of the State Capture Commission Part 1, which was handed over by Acting Chief Justice Raymond Zondo to President Cyril Ramaphosa last week. The full report will be released in three tranches, with the second and third tranches expected to be released at the end of January and February respectively. Hoffman believes Zondo will consolidate all his recommendations in the final tranche with respect to those implicated. Part 1 is split into three sub-sections, namely SAA and its subsidiaries, The New Age newspaper and its controversial business breakfasts as well as SARS and public procurement. – Justin Rowe-Roberts

The commission sat for about four years, it heard over 300 witnesses and spent R1bn of taxpayers’ money to get to this point. As you suggest, this is only the first tranche of three and it concentrates on SAA and its associated state-owned enterprises, the sad story of the capture of SARS and then, finally, it deals with the role of the Guptas in The New Age newspaper group getting the benefits of the taxpayers’ money by simply hijacking government ad spend and charging extortionate rates to sit at breakfasts arranged to swell its coffers. I believe we should not get too excited about the report at this stage. I imagine the Acting Chief Justice will consolidate all of his recommendations in the final tranche, which we can look forward to receiving at the end of February. Let us remind ourselves that a commission of inquiry is simply a tool of the executive branch of government that is used to investigate a complex factual matrix with a view to ascertaining what is the wheat, what is the chaff, what is the truth, what is false, and to make recommendations in relation to those findings.

On whether there is anything we didn’t already know in the findings:

No, I think the investigative journalists in South Africa, the whistleblowers, those who have pored over the evidence – like Paul Holden from London – they have all got to take a bow. In fact, Justice Zondo is very complimentary towards whistleblowers like Athol Williams and Cynthia Stimpel. There is nothing new. The only thing that is new is that the version of the whistleblowers and the version of the investigative journalists at amaBhungane, Scorpio, News24, BizNews, Paul O’Sullivan, even their version is accepted by the Acting Chief Justice, which is a feather in the cap of their work. It certainly puts the onus on those fingered to either man up to what they have done, or to take the findings against them on review and challenge the analysis of the facts that has been made by the Zondo Commission. The Acting Chief Justice has actually anticipated there will be review proceedings by various people who resist being held to account.

On the implications for the accused:

As far as the governmental response is concerned, it is very clear the reform of the Criminal Justice Administration is necessary. You will remember that in August 2020, the National Executive Committee of the ANC said it is time to create a permanent, stand-alone, independent entity to deal with corruption. That really matches what the courts have said in the Glenister litigation, which was waged years ago. The inwardness of reform of the Criminal Justice Administration is that the government has to come up with a plan, which is constitutionally compliant and matches the resolution that the NEC of the ANC passed. It called for cabinet to urgently establish such a body – a new anti-corruption body – where the functions relating to dealing with serious corruption are in a one-stop-shop, which is what the Scorpions and the Hawks are not. What Accountability Now has done in this regard is, in August last year, a year after the NEC, we produced a draft constitutional amendment and draft-enabling legislation for what we call the Chapter Nine Integrity Commission. We say that permanence is best achieved by housing your anti-corruption machinery of state within chapter nine because you cannot close down a chapter nine institution without a special majority in parliament.