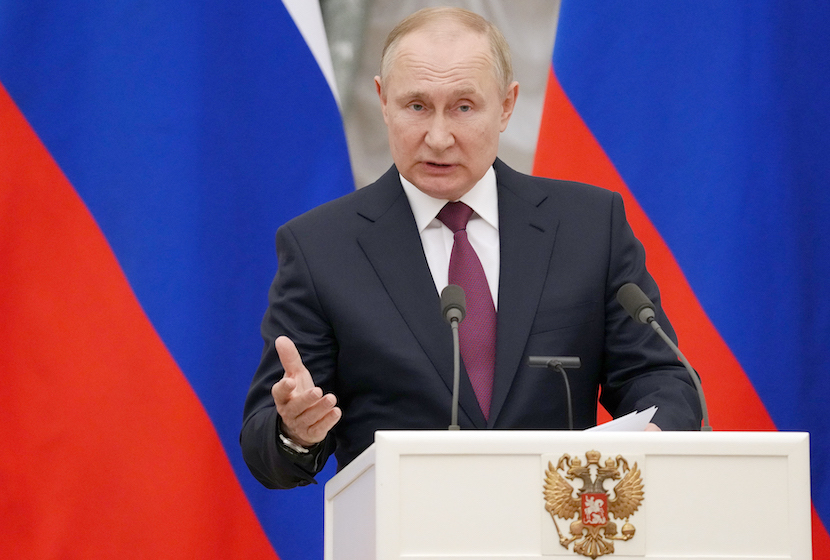 Guerrilla wars are costly and consume time and lives, with history full of examples where otherwise vastly more powerful government armies have been forced to withdraw and their political masters admit humiliating defeat. That’s the scenario painted here for the stumbling Russian invasion of Ukraine, where all the ingredients for a potentially drawn-out guerrilla war exist, especially given the long supply lines and growing patriotic resistance. The alternative is that Putin risks it all by resorting to nuclear war to bring a quick end to it all. It worked on Japan in the Second World War, despite the shameful and tragic aftermath, but this would be overkill on a desperate scale with unthinkable consequences for a future world order. A potential guerrilla war is a new thought in the Ukraine invasion analysis, but not unconsidered by Putin whose regime has faced similar guerrilla wars since the break-up of the Soviet Union. Story courtesy of the Daily Friend. – Chris Bateman

Ahead of the Russian invasion of Ukraine last week, President Vladimir Putin seemed to have great military might at his command. Yet, nearly a week later, Russian forces have still not seized control of the Presidential Palace in Kyiv. And rather than surrendering en masse, the Ukrainians are putting up a tough resistance.

Russia may yet achieve control over Ukraine, but Putin appears to have grossly miscalculated the decision to go to war. War is very often a game changer, and having upset the post-Cold War order, he has unleashed immense uncertainty and risk. One scenario is that his invasion of Ukraine will start a chain of events that sets off a guerrilla war, international opprobrium, internal opposition from his security establishment and public opinion and ultimately, leads to his political demise.

There is another scenario that suggests Putin will grow increasingly desperate and throw increasing forces into the fight. Having put his nuclear forces on alert a few days ago, we can no longer discount his threats. In any of these combined or separate scenarios, an end to Putin’s rule cannot be dismissed as an illusion or wishful thinking.

The Russian strategy has been to militarily overwhelm Ukraine with air power, armour, mechanised infantry, artillery, and cyberattacks from multiple directions. But Ukraine has options.

One option would be a long-drawn-out guerrilla war with the support of NATO. This would force Russia into throwing more into the fight and accepting more casualties. From the show of initial resistance, the commitment of Ukrainian President Volodymyr Zelensky to staying in place and providing leadership, and the motivation that comes from defending a homeland, it seems as if the invasion will be a very costly venture for Putin.

As Russia brings in more forces, its logistic lines in Ukraine to sustain its army will become longer and more vulnerable to guerrilla forces. Russia has faced this kind of war since the break-up of the Soviet Union, but this one will have to be a larger campaign. Ukraine covers a vast area and has a population of 44 million.

The Russians may well claim in coming days or weeks that they have taken control of key cities, but the reality might be different. It is extremely difficult to take and hold cities. An insurgency out of the urban rubble in Ukraine could be Russia’s undoing.

The war in Ukraine could have similarities to the Winter War that Finland fought against the invading Russians. Finland lost a sizeable portion of its territory to the Russians but fell back, fought a guerrilla war and halted a complete takeover, causing enormous damage to Russian lives, military prowess and diplomatic standing.

Even if he wishes to withdraw his forces under the pretext that the mission has been successful in teaching Ukraine a lesson, Putin’s weakness will be on show.

Another push-back that will hurt Putin is the, so far, united NATO response. After a limp response to Russia’s seizure of the Crimean Peninsula and the declaration of two pro-Russian ‘People’s Republics’ in the east of Ukraine, Donetsk and Luhansk, the West has shown resolve in this round. Not allowing business to be done with Russia, seizing assets and excluding their banks from the world payments system – as well as targeting Putin’s inner circle with sanctions – will hurt. And once Europe can find sources to replace Russian gas, this could really hurt Moscow and its war effort.

NATO will further beef up its divisions in Europe and its members will spend a lot more on defence. This is not something that Putin would have wanted as an outcome from his invasion.

And Putin is probably now weaker on his home front. Putin effectively controls the press, dissidents are locked up, and he invoked the nationalist narrative to secure his position. But despite risks of jail, large numbers have attended demonstrations against the invasion. And large numbers of Russians are seeking to emigrate to the west. Domestic fury could be further raised if Putin introduces conscription and Russian war casualties rise. A weakening economy and shortages could also raise internal fury.

Perhaps Putin should recall that the October Revolution of 1917 came in the midst of World War I, and that Russia’s long war and high number of casualties in Afghanistan were a factor in the fall of the Soviet Union.

There is also the question of why Russian soldiers captured by Ukraine say they were told they were on exercises. Finding out you were misled is a sure path to undermining morale. And the flimsy narrative presented by Putin that Russia invaded Ukraine to ensure “de-Nazification” and to deal with drug dealers has to be unconvincing, even to an audience captured by propaganda.

Putin’s humiliation on television of his spy chief cannot have gone down well with his security establishment. Indeed, the dressing-down of the spy chief has to raise questions about the extent to which Putin actually listens to expert advice. The public humiliation suggests that Putin’s closest advisors could be scared to differ with the strongman. While Russian nationalism is a powerful force, the invasion of Ukraine for Russia’s ‘security’ has to raise questions about whether Putin might have disregarded military advice. A hostile security establishment combined with irate public opinion could be Putin’s undoing.

Putin is diplomatically isolated, with calls for withdrawal being made not only by Western countries, but by many others.

South Africa has grossly misread the situation and botched its response to Russia’s invasion of Ukraine. First the minister of international relations and co-operation, Naledi Pandor, said, “South Africa encourages dialogue in a spirit of compromise.” A later statement called on Putin to withdraw his forces from Ukraine. Then, over the weekend the Sunday Times reported that the president spoke of “our Russian friends” and called for mediation.

The call for mediation is in line with the position taken by Brazil, India and China, all members along with Russia of the BRICS group. China has its own reasons to keep Putin on its side, in part to challenge the West, but also to get resource deals.

In diplomatic terms, Pretoria has sided with Moscow in a war. Should Pretoria try to help Russia in side-stepping sanctions, we will incur immense wrath from the West. After all, they see that a tough response is needed to dissuade Beijing from having any thoughts about seizing Taiwan. There are bound to be costs for taking this position.