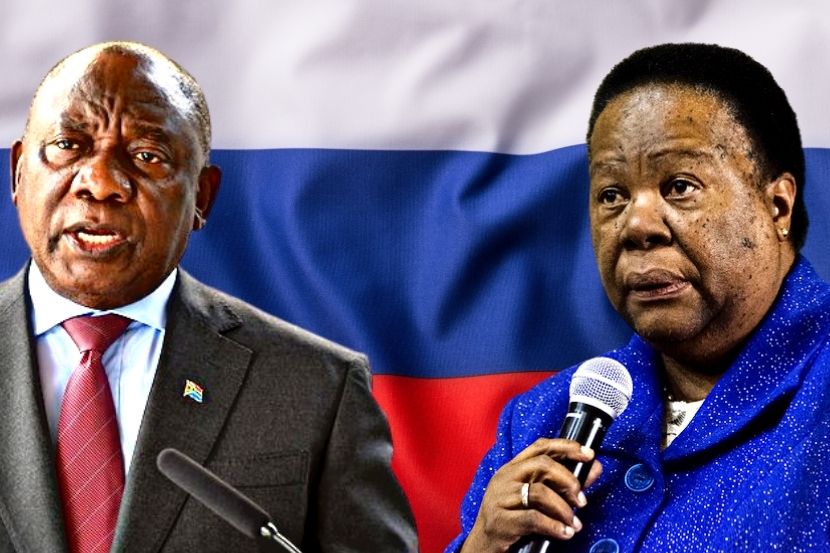 In different quarters of South Africa, there’s a definite difference of opinion about what is unfolding in Ukraine at the moment. Russia calls it nothing more than ‘special operations’, while Ukraine calls it outright war in which civilians are being butchered and non-military infrastructure indiscriminately pummelled in air and artillery strikes.

Dear subscribers, we have received a great number of letters of solidarity from South Africans, both individuals and organizations. We appreciate your support and glad you decided to stand with us today, when Russia, like 80 years ago, is fighting Nazism in Ukraine! 🇷🇺🇿🇦 pic.twitter.com/vj0N6ClhSJ

Over the weekend, the Russian Embassy in South Africa thanked our country for its support in standing with them as they battle “Nazism in Ukraine”.

I don’t know how widely canvassed this so-called local support for Russia is. Our former public protector Prof. Thuli Madonsela commented on that tweet saying: “I choose not to support Russia’s #UkraineInvasion and the slaughter of civilians as that is an unconscionable international law violation.” Former president, Jacob Zuma, never far from a contrarian view, issued a statement saying: “I know him [Putin] to be a man of peace who has worked hard to ensure peace and stability in the globe.”

Meanwhile, the South African government has been so coy on the subject that it appears determined not to upset Russia while maintaining its call for dialogue between the parties. But as you will hear from Steven Gruzd, head of the Russia/Africa project at the South African Institute of International Affairs (SAIIA), calls for dialogue while the guns are still firing is akin to urinating into the wind. Surely you cannot have a cessation of hostilities until Russian troops cease combat operations and withdraw from Ukraine?

While South Africa’s Department of International Relations and Co-operation (DIRCO) initially called on Russia to remove its troops from Ukraine, it has subsequently taken on a much more limp-wristed approach, positioning itself as a fence-sitter. Whether or not it’s truly a neutral observer is up for debate. 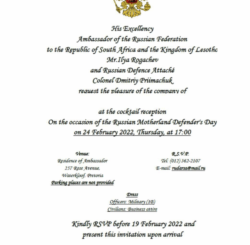 On 24 February, while Russian troops launched an offensive inside a sovereign country, our defence minister and the chief of the South African National Defence Force were hobnobbing at a cocktail function at the Russian Embassy in honour of the Russian military. Not a good look, honestly. This is a war playing out in the cities, towns and villages of Ukraine, but also on Twitter feeds, blog posts, TikTok, Facebook and Instagram. There is a battle for hearts and minds here. Some say the time for fence-sitting is over. Pick a side. That failure to do so will be seen as a tacit endorsement of Russia’s actions. The scale of human tragedy unfolding live on our television screens is abhorrent, no matter where your historical, ideological, economic, social or political allegiance lies. I turned to Gruzd to try and provide South Africans with some semblance of understanding of the complexity of the conflict and what this government’s stance on it is at the moment. – Michael Appel

South Africa’s official position is we are calling for a ceasefire. We are calling for mediation. We are calling for conflict resolution. And we don’t want to be seen to be picking one side or the other. The president, in his newsletter this week, said South Africa will get all the sides and their views must be taken into account. That dialogue is the only way and that the United Nations needs to get involved in this. Only in one statement have we said unequivocally Russia must withdraw its troops from Ukraine, and that was on 24 February. Everything before that and since then has been more neutral. We want to promote dialogue. We want to make sure the Russian point of view is actually taken into account.

I think it’s always important to know what your government is doing or saying, or not doing and not saying in your name. If we look at what happened at the United Nations, a resolution was brought to the Security Council that censured Russia and it was not passed. India, China and the UAE abstained, but it was vetoed by Russia because Russia – as a permanent member of the Security Council – has veto power. Then a motion was tabled at the General Assembly, where 191 countries were present. A total of 141 countries voted to support a strongly worded resolution for Russia to withdraw its troops, and for peace and dialogue in the area. South Africa abstained on that. We were one of 35 countries that abstained. Six countries voted no, including Russia, North Korea, Syria and Eritrea. I think it is very important for citizens to know what our government’s official line is. We voted for this government and it represents us. And, if citizens do not agree with what government says, I believe they are within their rights to question that, whether it’s on social media, the media or protests, or you wait until the next election.

I think what was good was that South Africa explained its decision. So, just after the vote was taken, an explanation went up on the DIRCO website. South Africa says the process of putting the resolution together was not as consultative as it should be. Secondly, the resolution has a throwaway line at the bottom where it says we should call for peace and dialogue. But 80% of the resolution is critical of Russia, and while South Africa says it remains neutral, many have read into that stance that if you’re not against what Russia is doing, we’re implicitly endorsing it. I think it is more subtle than that.

On whether an information war is also under way?

Absolutely. This is hybrid warfare in its best form. In that particular tweet [from the Russian Embassy], I hope you saw the reply from the German Embassy, which said: unfortunately, we are the experts on Nazism, and this is just nonsense. Indeed, this is an information war. You can see it on social media. I’m sure all our feeds are full of commentary from people on the ground, from opinion makers and indeed the leaders themselves. I think President Zelensky has done an amazing job of putting his view out there, of being personable, personal and very brave. I think Putin has appeared much more wooden and reserved. Some might say unhinged at certain points. So, we have contrasting styles and, of course, supporters of both sides are exploiting social media to get their view across.

Quiet diplomacy was a phrase that came into the lexicon around our work on Zimbabwe after the 2008 elections. South Africa said, under president Thabo Mbeki, that we refuse to practise megaphone diplomacy. We have quiet diplomacy. We will work behind the scenes. It did bring about the global political agreement in Zimbabwe, which led to a coalition government. While it’s much maligned, I think there is a role for behind-the-scenes work in diplomacy. We also know from our own transition that the ANC met with PW Botha and FW de Klerk. They were meeting Mandela while he was in jail. That only came out years later. We do have diplomatic muscle. We do have a say and we do have an important voice on the African continent and the international stage. President Ramaphosa is trying to recapture some of that voice, which may have been quieter in the last 10 years. But if we can make an effort to bring these parties together, we should.

On the ANC’s historical ties with the Soviet Union

The ties are quite significant. Russia was one of the big supporters of liberation movements in southern Africa, including Angola and Mozambique, both of which had socialist governments. After the initial civil wars, the Soviet Union provided weapons. We know there were Cuban and Russian soldiers in Angola for many years and that was resolved only when Namibia obtained independence in 1990. Many ANC operatives of a certain generation studied and had weapons training in Russia and the other countries of the Soviet bloc. Some of them speak Russian. There’s an affinity there. We also saw last week that there was a celebration of 30 years of diplomatic relations between Russia and South Africa on the very eve the war started. Senior government officials and military top brass were at that function. I don’t think that was a good look.

On being very careful about what is posted on social media

Both sides are firing salvos [on social media] all the time. Be cognisant of what you like and what you retweet, I think this is particularly true on Twitter. I think we must be very cautious. What is the source of it? Is it genuine? Do I pass it on? Do I comment on it? Do I ignore it? Who do I believe? I think shutting down Russia Today (RT) in Africa because the European feed is no longer live is a controversial issue. Many people watch that channel. Some condemned it as shameless propaganda. Others said it is important to see the Russian point of view of these things. I think in a way, it’s a shame it was taken down. I understand the reasons for it. This is a war of ideas as much as it is a war of guns and mortars and anti-aircraft missiles.