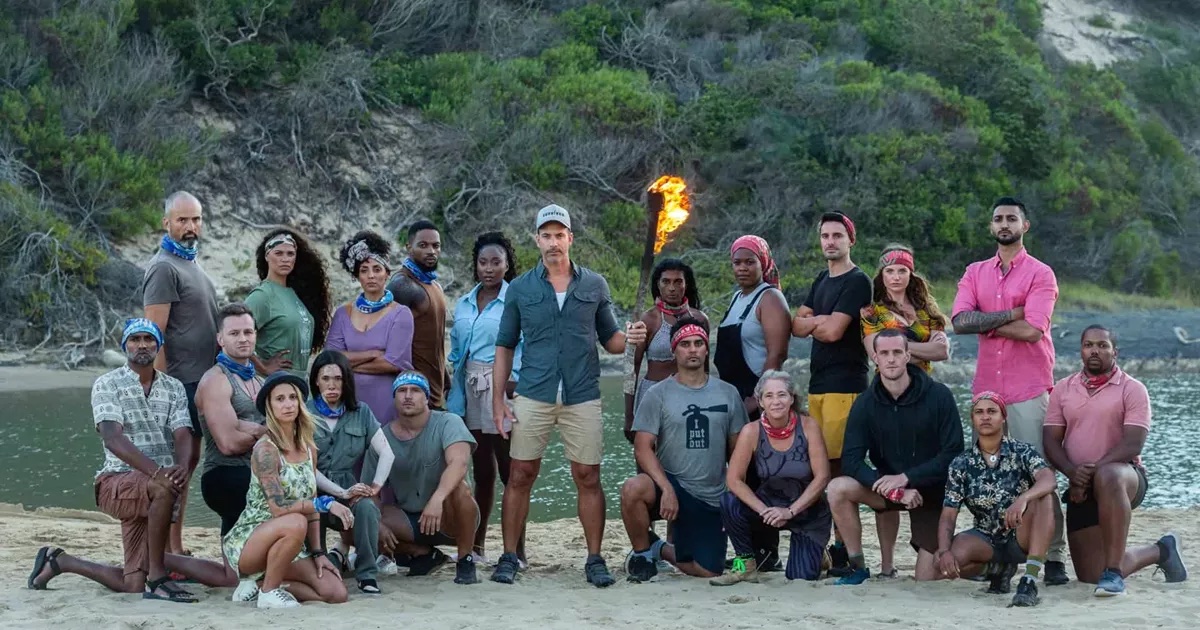 I reckon part of the global cult appeal of the ‘Survivor’ TV series is each viewer imagining themselves in that situation – and empathising with players closest to a proxy for them. Which would explain why some people wait for a decade or more to secure a spot, studying every bit of strategy they can and creating a virtual plan for when they succeed. I was raised too Catholic, (being lapsed is no cure), to feel comfortable with barefaced lying and manipulation, though I must admit remaining poker faced in a card game has its appeal. I discovered here how little I knew about Survivor’s global appeal – especially how popular our SA version is with some overseas audiences. You could argue that it taps into our common humanity more than say, MasterChef, where the Australian version sold me on their empathic, highly appealing egalitarian ‘mate’ culture. The Survivor contestants are more cosmopolitan, the SA version showing just how far we’ve come post-apartheid, regardless of how some of our more selfish, greedy politicians would have us believe otherwise. – Chris Bateman

The television programme Survivor, features a group of strangers in a remote location where they have to survive by sourcing food, water, fire and shelter. At the same time, they compete in challenges to earn rewards and prized immunity from being eliminated. The contestants are progressively removed as they are voted off by the other participants, the programme concluding when there is only one person remaining. This ‘ultimate survivor’ then receives the grand prize of R1 million.

I have never watched an episode of Survivor but have often been intrigued by how many people seem to be obsessed with the programme. Eventually, I succumbed to pressure from my daughter, Lucy, an avid fan, to watch an episode. What I discovered is, despite being about having to outlast your opponents in various physical challenges, when you dig deeper, it is actually about who can be more ruthless than everyone else. “You have to be the best strategist to win,” says Lucy.

That the strategy may involve lying, stealing, cheating, or double-crossing didn’t seem to be of particular concern to her – although I must admit observing these traits in the contestants certainly made for riveting viewing. The participants are given various physical challenges and initially compete in ‘tribes,’ although being part of a specific group doesn’t negate that they are working for themselves. My interest aroused, I got hold of the executive producer of the Survivor SA series, Handrie Basson.

He laughed when I mentioned the subterfuge that seems mandatory if you are to be the sole survivor. “Being determined, callous and conniving helps,” he says, “but they must also be physically fit, durable and fiercely competitive.” All of which is a euphemism for: you must be able to lie with a straight face; collaborate with the enemy; negotiate like an Egyptian carpet salesman and be a superb strategist. Then you have a chance.

Recently, as a consequence of Covid and the resultant travel restrictions, the series was allowed to be held in the country of origin. Previously, contestants were placed in some remote location not in the borders of the home country.

Collen Dlamini, executive head of Corporate Affairs for MultiChoice, which owns the rights in South Africa, says, “Over the last two years, the pandemic has forced us to seek out local settings for the show’s location. This has allowed us to boost local economies through job creation and up-skilling. We also partnered with the Eastern Cape Development Corporation, to support growth in the local economy.”

This has been an enormous fillip for South Africa, because now the beautiful Eastern Cape, where the latest series was shot, is showcased to the world every time an episode is shown in another country – which is quite often. Handrie explains, “Survivor SA is the only South African-made show that has been bought by Australia, the US, and the UK. And from season 8, the Australians are broadcasting it on the same date as we are. I think what Survivor SA has managed to do is earn the respect of the international Survivor community…even if it is cult fandom,” he laughs.

“We often forget,” he says, “it’s not just in these three countries the show is made. I think there are forty territories doing it in their own languages and versions. Over the last couple of years, Survivor has really earned its place on the international podium in terms of quality and there is always a debate out there as to which one is best. So far, we have come outranking highly with the international podcasts and critics, which is of course, wonderful.

“But to give you some indication of its popularity, the US is on season 43 and still going. Australia is on season 9 or 10. France is on season 26 and there are many countries in the twenties. From a format success, Survivor as an international brand is very successful. It’s the 25th anniversary this year and last fiscal year was when the most format executions happened.”

Something which concerned me was the degree to which the show is manipulated to allow ‘the right’ person to win. “In no way, shape or form is there any external influence,” says Handrie. “The outcome of the series does not depend on audience votes or similar, like in some other shows. The survivors decide themselves. They create this social construct – this society for themselves. They decide on their rules for sleeping, eating, work ethic around camp – all of those behaviours are entirely up to them.”

He explains that producers provide the structure in terms of when they compete in challenges and what those challenges look like, and what they receive from the challenges. But that is it. “For instance, if it is a reward challenge,” he says, “where we reward them with food, supplies, comfort items or sometimes treats, or if it is an immunity challenge whereby, they can win immunity from the tribal council – we arrange those challenges. After that, it is up to them who is voted out and we have no influence whatsoever.”

He continues, “When you start off with the show as a fan, we all want our favourites to succeed and win; but the absolute magic of this format is it doesn’t really matter who wins. Sometimes it’s controversial, sometimes it’s a polarising vote, sometimes it is unanimous – it all depends. Every season brings its own entertainment value with its own characters and participants who become absolute fan favourites or not.”

I ask him how our show compares with the American one. “For the longest time, the US version was the only standard our audiences were exposed to. As with a lot of these kind of shows, we as producers have the odds stacked against us because we are competing effectively with South African audiences’ expectations of an international show. Often, we don’t have the same resources; we don’t have the same budget and for a multitude of reasons, it is not a level playing field we work on with our international counterparts.” As an afterthought he adds, “Although for us to be held to the standard (initially) of the US season, I think spurred us on to achieve something comparable.”

The current series running at the moment features twenty returning players from past seasons of Survivor SA – none of whom made it to, ‘Sole Survivor.’ And this time they are playing for a massive R2 million, the series’ highest prize offer to date. So, all things considered, it seems Survivor has survived the Covid pandemic spectacularly. And I guess, I could soon be joining the ‘cult’ that is, according to Handrie, ‘their fandom.’