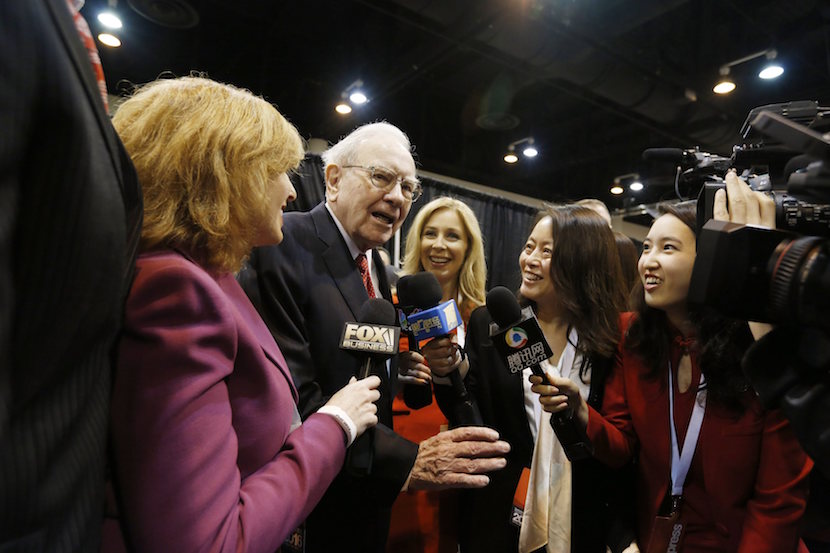 Eight years ago, Berkshire Hathaway chairman Warren Buffett put down a million dollars to prove a point: that most investors would do a lot better by putting their money into a tracker fund than entrusting it to an active fund manager. That bet has been a spectacular success. The Wall Street hedge fund manager who took up the cudgels must be regretting the decision. In 2015 the hedge funds – a selected combination of the US’s 200 best – did only fractionally better than the tiny gain eked out by the S&P500 index. But with just two years of the decade long to run in the bet, the hedgies are trailing badly behind the index – returning a cumulative 22% against the S&P’s 65%. – Alec Hogg

By Sonali Basak and Noah Buhayar

“There’s been far, far, far more money made by people in Wall Street through salesmanship abilities than through investment abilities,” Buffett said Saturday during Berkshire’s annual meeting in Omaha, Nebraska. 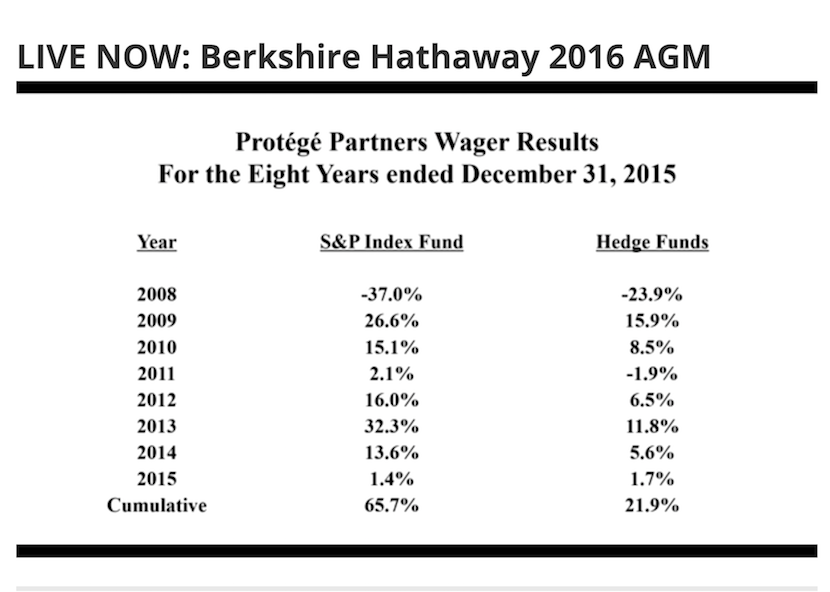 Hedge funds traditionally charge a management fee that’s 2 percent of assets, plus 20 percent on any profits. That’s “a compensation scheme that is unbelievable to me,” Buffett said. He added that some pension funds have disregarded his advice, and gone ahead and hired consultants.

The billionaire made a bet in 2008 against Protege Partners that its strategy that invests in hedge funds couldn’t beat a Vanguard mutual fund that tracks the S&P 500 Index. The winner’s charity of choice gets $1 million when the wager ends at the end of next year.

The bundle of hedge funds in Protege’s bet returned 21.9 percent for the eight years through 2015, according to a Berkshire presentation Saturday. That compares with the 65.7 percent climb in the S&P Index fund.

“I hope you realize that for the population as a whole, American business has done wonderfully, and the net result of hiring professional management is a huge minus,” Buffett said.

Read also: Berkshire AGM transcribed: The one thing Warren Buffett worries most about

Dan Loeb, an outspoken money manager, said this week that the industry is in the first stages of a washout, and that it’s one of the most catastrophic periods for hedge funds since he started New York-based Third Point. Popular managers including Alan Howard and Paul Tudor Jones are preparing for billions of client funds fleeing their firms, while some of the world’s largest asset managers such as BlackRock Inc. also have faced setbacks with strategies.

“Supposedly sophisticated people, generally richer people, hire consultants. And no consultant in the world is going to tell you, ‘Just buy an S&P index fund and sit for the next 50 years,’” Buffett said. “You don’t get to be a consultant that way, and you certainly don’t get an annual fee that way.”

Buffett supports the presidential candidacy of Democrat Hillary Clinton, who has lamented that the nation’s top hedge fund managers earn more than all U.S. kindergarten teachers combined. He has also agreed with Republican Donald Trump in calling an end for a tax break that helps hedge fund managers.

Buffett on Saturday also called out money managers for routing investments offshore and gaining tax advantages by creating reinsurers, a strategy that Clinton has also criticized. Berkshire is one of the world’s largest reinsurance companies and competes against such firms.