The past week has witnessed considerable speculation about the role Pretoria-born and raised Elon Musk is about to play at social media company Twitter. Musk, who is one of Twitter’s top ten influencers with over 80m followers, built a stake of almost 10% of the company through buying shares in the open market during the past few weeks. After his accumulation was disclosed, Twitter’s share price jumped 30% and its directorate invited the founder of Tesla and SpaceX onto the board. After initially accepting, Musk turned hostile over the weekend, tweeting up a critical storm. It emerged late last night that he has changed his mind and won’t be joining the board after all – opening the way for the world’s richest man to buy more than the 14.9% ‘cap’ for directors, and possibly launch a hostile takeover bid. Below are two pieces from the WSJ with the latest. – Alec Hogg

By Salvador Rodriguez of the Wall Street Journal

The announcement of the reversal came after Mr. Musk spent a weekend tweeting criticisms, suggestions and apparent jokes about the social media company.

Mr. Musk tweeted about the social media company throughout the weekend. He asked his 81 million followers if they thought that Twitter was dying and pointed out that several top accounts, including those of artists Taylor Swift and Justin Bieber, rarely tweet.

Mr. Agrawal said that the board had many discussions with Mr. Musk about joining. Mr. Agrawal and the board were excited about collaborating with Mr. Musk but expected him “to act in the best interests of the company and all our shareholders,” Mr. Agrawal wrote Sunday night in a note posted on his Twitter account.

Mr. Musk’s appointment was set to start on Saturday, but, Mr. Musk “shared that same morning that he will no longer be joining the board,” Mr. Agrawal wrote.

Most of the provocative tweets appeared to come after Mr. Musk decided not to join the board. His weekend string of tweets started at around 9:30 a.m. Eastern time on Saturday morning.

“I believe this is for the best,” Mr. Agrawal wrote, referring to Mr. Musk’s decision not to join the board. “We have and will always value input from our shareholders whether they are on our board or not. Elon is our biggest shareholder and we will remain open to his input.”

Mr. Musk tweeted an emoji of a face with a hand over its mouth on Sunday evening. He didn’t immediately respond to a request for comment.

“The drama that keeps on giving,” one Twitter employee tweeted Sunday evening. Another simply tweeted a photo of the cartoon character SpongeBob SquarePants lying face flat on the floor.

“There will be distractions ahead, but our goals and priorities remain unchanged,” Mr. Agrawal wrote. “The decisions we make and how we execute is in our hands, no one else’s. Let’s tune out the noise, and stay focused on the work and what we’re building.” 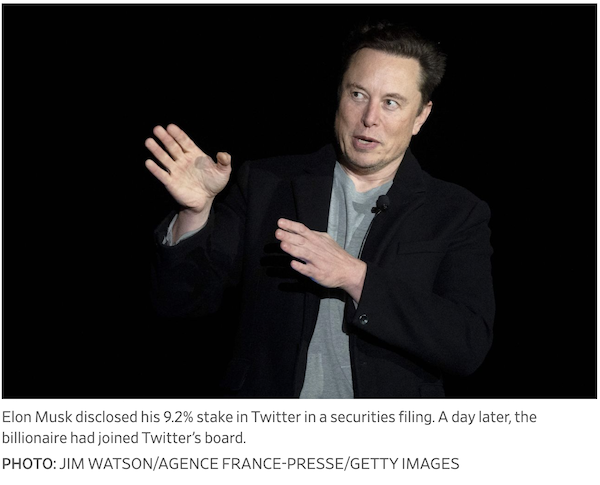 Mr. Musk, Twitter’s newest board member and largest shareholder, used the social-media platform on Saturday to share his ideas on how it can improve its services, making apparent jokes and taking aim specifically at the company’s Twitter Blue subscription model.

In a series of provocative tweets, the chief executive of Tesla Inc. and SpaceX said Twitter Blue should ban ads, lower its $2.99-a-month price and consider accepting dogecoin cryptocurrency as payment for the subscription service. He also said subscribers should get an authentication check mark.

“Price should probably be ~$2/month, but paid 12 months up front & account doesn’t get check mark for 60 days (watch for CC chargebacks) & suspended with no refund if used for scam/spam,” he wrote on Twitter.

“And no ads. The power of corporations to dictate policy is greatly enhanced if Twitter depends on advertising money to survive,” said Mr. Musk, who has roughly 81 million Twitter followers.

Twitter gets close to 90% of its revenue from advertising.

It is difficult to ascertain how serious Mr. Musk was about the suggestions as some of the tweets were seemingly intended as humor.

Mr. Musk continued on Sunday by asking his users if it would make sense to “Convert Twitter SF HQ to homeless shelter since no one shows up anyway” in a tweet poll.

Former Amazon CEO Jeff Bezos responded to Mr. Musk on Sunday in agreement, suggesting portions of a corporation’s headquarters could be dedicated to providing shelter. In the tweet, Mr. Bezos shared a link to a story about how Amazon built a homeless shelter next to its offices in Seattle.

“Or do portion. Worked out great and makes it easy for employees who want to volunteer,” Mr. Bezos wrote.

While Mr. Musk is known for causing controversy with his public comments, it is unusual for a major shareholder and board member to call out a company in such a public manner.

“Musk is often provocative and certainly takes risks,” said analyst Daniel Newman of Futurum Research, an advisory business that focuses on digital technology. “However, I believe he’s methodical and purposeful, even when it may not appear that way.”

Twitter Blue is the social-media company’s first subscription service, which allows paid members to access special features, including an “undo tweet” option and the ability to use a nonfungible token that a user owns as a profile picture. Twitter launched Blue last year, but the company has yet to disclose how much revenue the service generates or how many subscribers it has.

Since early 2021, Twitter has been driving toward publicly stated goals of reaching 315 million daily users and $7.5 billion annual revenue by the end of 2023. The company reached $5.08 billion in revenue at the end of last year, up 37% from the previous year. User numbers increased 13% to about 217 million daily users. If the company maintains this pace through the end of 2023, it would exceed its revenue target, though miss the mark for enlarging its user base.

Shares of Twitter are down more than 25% over the past six months. The NYSE Composite Index is up more than 1% in the same time frame.

Parag Agrawal took the reins as Twitter chief executive in November after co-founder Jack Dorsey stepped down from the role. Mr. Agrawal rose to the position after serving as Twitter’s chief technology officer since 2017 and working at the company for more than a decade.

Mr. Agrawal moved swiftly to reshuffle the company’s leadership and enact a culture of moving quickly and decisively. Since his arrival, the company has also pushed further into supporting blockchain and NFT technologies.

Mr. Musk disclosed his 9.2% stake in the company in a securities filing last Monday. As of March 14, Mr. Musk owned almost 73.5 million shares of Twitter, according to the filing, representing a stake valued at roughly $2.9 billion.

Mr. Musk has more Twitter shares than the company’s co-founder and former CEO Jack Dorsey, as well as large financial institutions such as the Vanguard Group.

Mr. Musk, a prolific user of Twitter and one of its biggest critics, joined its board of directors on Tuesday and said he was looking forward to making “significant improvements to Twitter in coming months.”

On Wednesday, Twitter said it is developing a feature that will allow users to edit tweets after they have been posted. The announcement came after Mr. Musk polled his followers asking if they wanted the edit function.

Mr. Musk’s poll attracted 4.4 million votes. Twitter’s communications team denied that the move was related to the poll, but Mr. Agrawal retweeted it, saying, “The consequences of this poll will be important. Please vote carefully.”

A self-described “free speech absolutist,” Mr. Musk has frequently encouraged the platform to allow a range of opinions.

Mr. Musk’s tweets have gotten the billionaire into legal troubles in the past. In September 2018, Mr. Musk and Tesla entered into a settlement agreement with the Securities and Exchange Commission following a security fraud charge brought by the SEC against him.

On Saturday, Mr. Musk took swipes at the company whose board he joined earlier this week. Mr. Musk asked his followers, “Is Twitter dying?” and pointed out that many of the top accounts, including those of artists Taylor Swift and Justin Bieber, rarely tweet.

It wasn’t the first time the billionaire CEO publicly criticized Twitter—or backed dogecoin, which he has generally supported while criticizing bitcoin for its energy use, among other things.

In December, he sent dogecoin’s price upward by about 40% in a day after tweeting that Tesla would begin accepting the cryptocurrency for some products.

“Tesla will make some merch buyable with Doge & see how it goes,” Mr. Musk wrote on Twitter at the time.