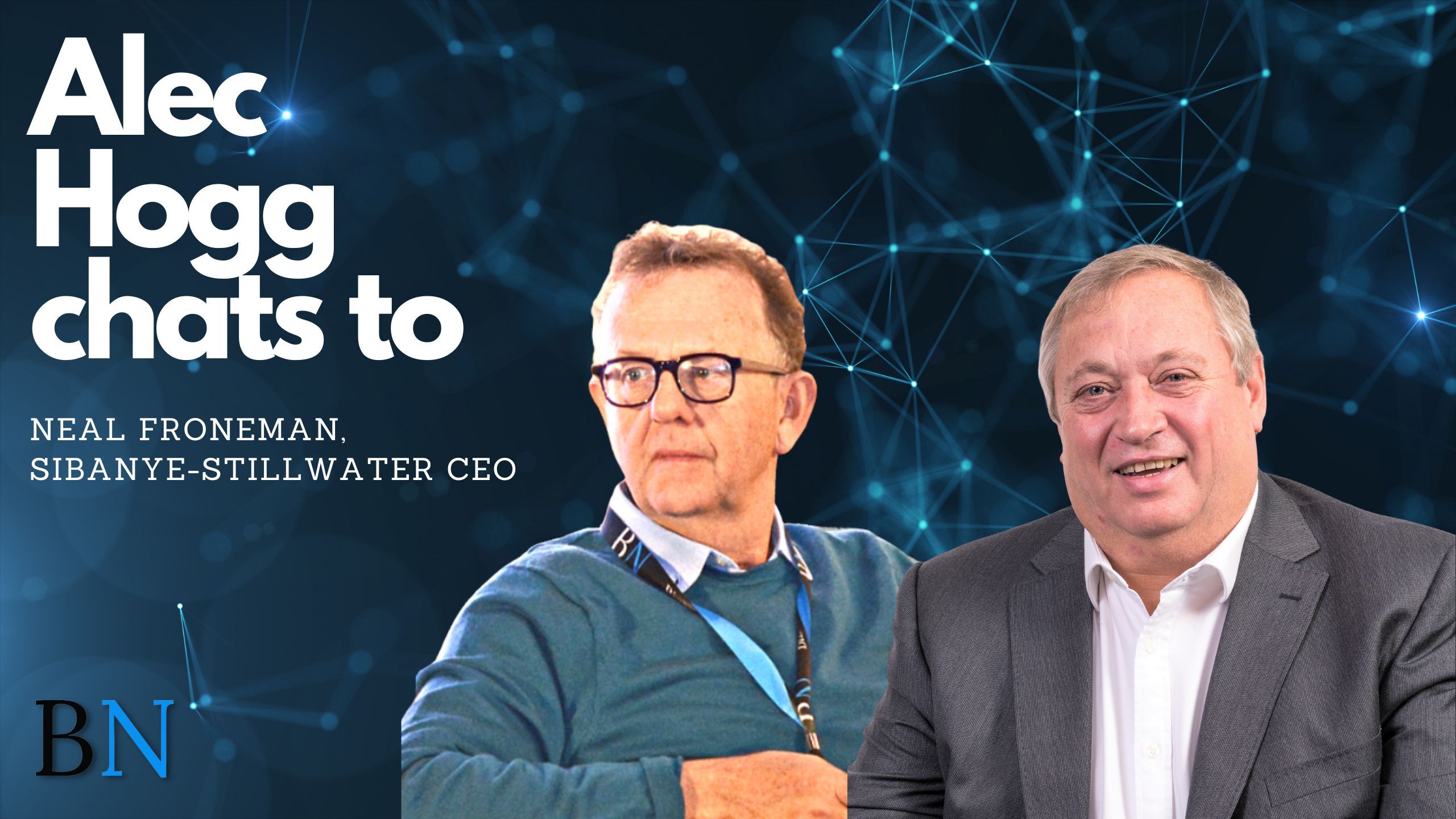 A cracking interview with Sibanye Stillwater’s founding and still current CEO Neal Froneman, who believes political correctness is for the insincere – especially in the South African context –  in this fascinating half hour explains why the solution to SA’s fraught labour relations lies in “share value” and “stakeholder capitalism” rather than confrontation with “increasingly irrelevant” trades unions. Froneman also explains why he supports Rob Hersov’s forthright message expressed at BNC#4, shares his view of what is urgently needed for SA Inc to effect a turnaround, and the impact of a sanctioned Russia for platinum and palladium, where Sibanye is a major player. He spoke to Alec Hogg of BizNews.

Neal Froneman on being outspoken against the South African government

Of course I can be politically correct, but being politically correct has not taken the country anywhere in the right direction. Of course, I understand what advocacy is, and yes, we can use it, but it just creates confusing messages. I think the only way to be clear is to be blunt and try and explain in the national interest what is wrong. Rob (Hersov) does that extremely well. I’ve given up on trying to be politically correct. I see business continues to try and do that, to try and prop up a government that seems just hell-bent on not changing. They don’t seem to see a crisis. And we continue just to move in the wrong direction all the time. But it really is very disappointing and concerning.

On South African citizens getting involved and picking a side

I think that the current government has a short period of time to indicate that it is willing to change, although I don’t believe it can change. And I certainly think that, as difficult as it is, we actually have to vote for other parties. We’ve got to make coalitions work. I know that they haven’t worked now, but then I have to ask, what is business done or what has any civil society done to actually assist in helping parties make coalitions work or getting other parties together? Because until that happens, it’s almost a waste of time to vote for the ANC until they can demonstrate they are willing to, let’s say, let go of the state intervention type approaches. It’s pointless to continue doing the same thing and expecting the ANC to change. They’ve either got to demonstrate they’re going to change – or we need to look for other solutions.

It’s really interesting that you are prepared to speak out like this because we go back to Sibanye, the beginning of Sibanye. It’s almost ten years now. Goldfields Limited split off its South African mines apart from South Deep that it didn’t want. And then you were the guy who picked them up and and have created a business that today that original business if, if my analysis is correct, is only about 10% of what Sibanye-Stillwater is today.

That is absolutely correct. And when we inherited these assets, we’re given the responsibility of managing them. We stood back and we looked at the good, the bad and the ugly. And, you know, that’s my message to the government. Look at the good – there is good. Look at the bad and look at the ugly and acknowledge it. And that’s how we ran our company. We acknowledged what was good. We kept it. We found out what was bad. And we fixed it. And the ugly, we just stopped. And until you do that self-assessment, you won’t move forward until you acknowledge there’s a problem, like being an alcoholic. You know, until you say, I’ve got a drinking problem, you don’t start fixing it. And again, I think running a business and running a government is not too different.

On what it will take to turn the country around

It’s a tough task. And I approach it from: We’ve got to reduce poverty. We’ve got to reduce inequality. And it really starts with unemployment. There are too many unemployed people and we have to create employment now. I don’t believe government can do that in a significant manner and therefore they have to embrace business not in the sort of half acceptable way. They’ve got to create the environment, make it easy for legal businesses to operate. They’ve got to stamp out crime, they’ve got to stamp out corruption because that rot filters through our businesses, through our culture. We end up with organisations where rule following and adhering to policies and procedures often gets questioned because of what happens at political leadership levels. And I’m not just pointing fingers at government now. I’m saying that all leaders in South Africa need to display the right behaviour, the right values. And anyone that’s been involved in a change management situation knows that it takes many years to change behaviour. Technically, to do the right things is not too difficult. But we have developed a very bad culture in South Africa in my view, that is going to take many years to turn around and create a winning nation.

On the life of Sibanya- Stillwaters mines

They still have about ten years of life. Obviously, Beatrix a bit shorter, maybe 4 to 5 years on let’s say, given current horizons. Kloof has in excess of ten years and Driefontein, amazingly, still 7 to 8 years. You know, we probably get negative value and I know that sounds crazy. How do you get negative value for assets you own? But of course when analysts model you, they actually include liabilities, environmental liabilities, closure liabilities. And of course they run it into a negative NPV model. So that’s why I say we in some cases, we see negative NPV for those assets. Yet you just take something like the recent strike we’ve had and what that has done to our EBITDA without having three months of gold production. And you realise those assets actually still generate a significant amount of earnings as assets. But the point you made right at the beginning of this conversation, it’s only about 10% of our earnings, but they are in their own right, still valuable assets. I would imagine that current gold prices, anything between 20 and 30 billion rand of value, they have huge optionality because they are marginal. They’re not assets like our PGM assets. But we employ 30,000 people at our gold business. And if we can keep it profitable, even if it’s only slightly profitable, we are delivering not just shareholder value, but also societal value. And, you know, you’ll hear me, I’m sure, through this conversation, talk a lot about shared value and what it means, across the board, not just to shareholders. You’ve got to think much more broadly than just shareholders these days.