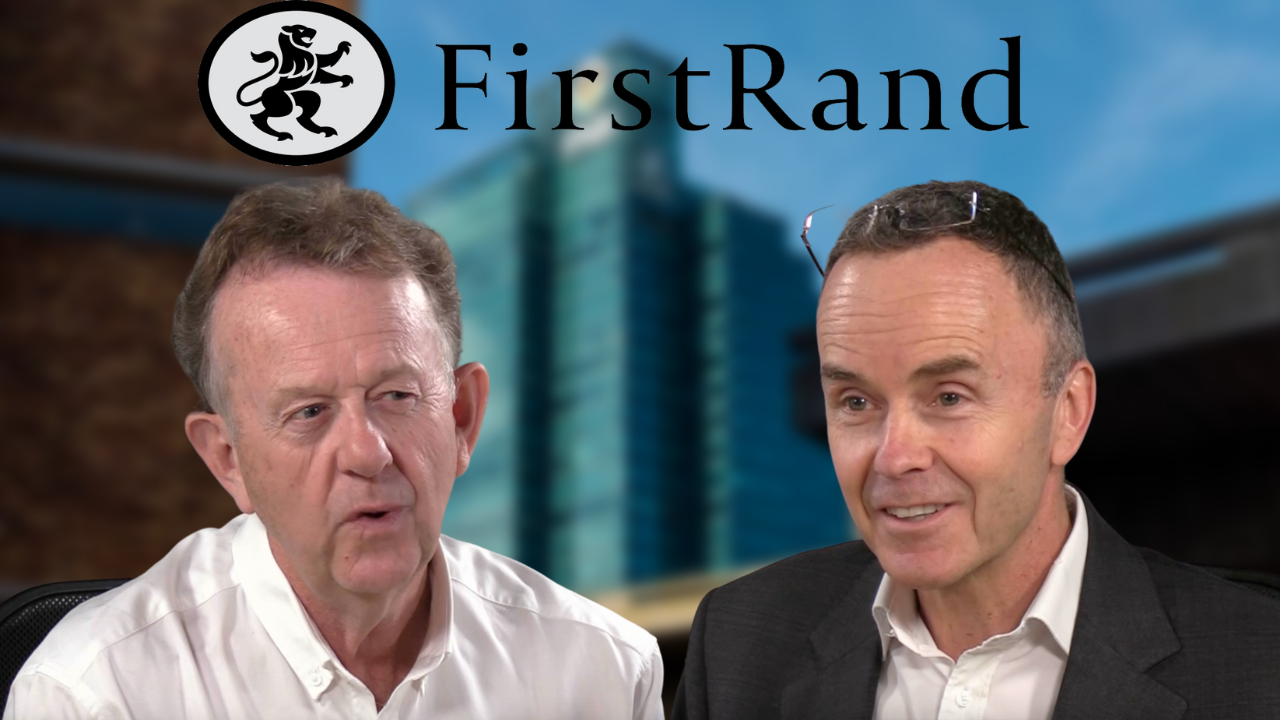 Investors in banking stocks ask first about the prospects of the country where the institution operates, then about the company itself. Having just arrived back home from a post-results roadshow to US and UK investors, FirstRand CEO Alan Pullinger has been thinking a lot about their questions around the likely future for the SA economy. His conclusions – positive results of economic reforms; optimism about the country’s latent potential – may come as a surprise for many of his fellow citizens. Rational, insightful and balanced, Pullinger delivers hope without varnishing reality. He spoke to Alec Hogg at BizNews.

Excerpts from the interview with FirstRand CEO Alan Pullinger

Alan Pullinger on how FirstRand stays entrepreneurial without the founders

It is something we talk about. I suppose I’m fortunate, you know, having been part of the creation of FirstRand. I actually joined Rand Merchant Bank Limited, and then if you can recall, in those days Rand Merchant bank limited was owned by Momentum. Momentum was the listed entity and it had a wholly owned subsidiary called Rand Merchant Bank Limited. And then subsequent to that, the First Rand group came about, you know, through the asset swap, if you like, with Anglo American and Remgro and, and FNB and Southern Life came into the mix and it was all put together and called FirstRand. So I’ve been there from inception. I’ve had the privilege – and it really is a privilege – to work with G.T. and Laurie and Paul, you know, very closely. I’ve learnt a lot of what I know about banking from them. Yeah, they have left the group. I do think the current executive management team are all similar to me and they’re all long-termers, know the founders intimately. But I suppose, you know, in the fullness of time the founders become more and more of a distant memory. There are certainly youngsters who joined the group now who don’t know anything about the founders. And I suppose that resonance, you know, is probably more academic. You read you can read a book about it, but you don’t really feel it. You know, for us we felt we were the founders and that feeling is still strong in the current management team. Our challenge, of course Is how do we hand it over to the next generation and the next generation. I think the really good sort of profound learnings and teachings from the founders remai -. there are equally some things we’ve let go of. And that’s also important, we can’t always be looking back for the wisdom. Sometimes we have to find some of our own wisdom, and the world has changed so dramatically over the last five, ten, 15 years.

On the culture at FirstRand

It’s easy for the current management team. You know, we’ve all been brought up with us. You know, we talk about an owner, manage your culture, try to you know, we treat our employees as owners, which is a great way to treat people. I guess that implies a significant degree of empowerment. Why? Because owners are empowered. I mean, I guess ownership gives you that ultimate empowerment. So we create that feeling of ownership through a model of empowerment. And that’s not to say that, you know, people might not let you down. They may let you down. But we think if you hire good people, they shouldn’t let you down often. And we would rather run the risk of somebody letting us down now and again but give them that model of empowerment. Because what we do know for sure is when you empower a human being, they thrive. That for us is very, very clear. So we want that thriving, that discretionary energy from employees. We do it through a model of empowerment. How do we do it? We get them to care. It ultimately comes down to care. I mean, I could bumble on for hours about all the different philosophies. I could throw a thousand buzzwords at you. But the truth is, it comes down to care. An owner really cares about the business. An owner will walk in and, if there’s a piece of paper on the floor or something, and it looks a bit shabby, an owner picks it up. It’s not their job, but they pick it up. Why? Because they care. And it’s that deep sense of care that we try to engender in our employees.

On the positives of South Africa

We’ve got a huge vested interest and I suppose it’s difficult if a business is negative or pessimistic. I mean, you actually have to change the management team because business by definition is optimistic. I mean, by definition, you are taking risks. You are investing today for a better future. And so I think by definition, our outlook is always more positive. It’s always more hopeful. We think it’s a credible mindset, we’re not naive around the challenges in the country they are material. I guess the frustration for us is that it’s fixable. It truly is fixable. Now, I often say, there are worse places to be. I mean, you could be in southern Sudan where there isn’t a lot going for you. I mean, you’ve got real, real challenges, yet you’ve also got needs in the country. You’ve got a population that you have to look after. We’ve got a hell of a lot going for us. We’ve got resources, we’ve got space, we’ve got land, we’ve got entrepreneurial people. We have institutions of strength. We are also not a poor country. I mean, I think that’s also a misnomer. I think we are the 36th biggest country by GDP in the world, that’s not trivial. We are part of the G20. I think we forget these things. You know, we often run to the developed world with a begging bowl and say, we need money. We are considered a middle-income country. We are certainly not poor. So we’ve got the resources. We’ve got a strong private sector. We’ve got the engineers. We’ve got the skills. We’ve got ideas. We know how to do it. We’ve got banking systems. We’re part of an international monetary system. We’ve got foreign investors that will buy our local denominated bonds. Very few countries in the world have that privilege very, very few. Yet they will buy our bonds and in size, I mean, they are significant investors. So it’s not just about yield. You can go and look at other countries and other countries that have to issue debt to foreigners. But in a hard currency, that is a much worse situation to be in. So thankfully we haven’t got that. We have a relatively low portion of our total debt as a sovereign in hard currency. Why? Because people will invest in the rand. It’s a gift. It’s an absolute gift.

On FirstRand being such a large organisation

Let’s go with the 2 trillion. I’m not trying to inflate things, okay? But it’s big. It’s hefty. So we are an elephant, which means we’re not going to use the word “super agile”. We can’t turn on a ticky. You know, we can hide under the bush and pop out when the storm clouds disappear. An elephant can’t hide. I mean, an elephant in the bushes is an elephant in the bush. It can it goes through the bush. Yes. Sometimes it can run and it can pick up a reasonable pace. But it’s certainly not a cheetah. We are an elephant. I guess there’s a lot in that statement. You know, one we can’t hide so we do need to face up to the national agenda. And we do need to show up and pitch up and act like an elephant. But it also means, you know, an elephant can do things that say, a mouse, can’t do. And we must appreciate that we have a responsibility to do that. And, you know, we have a lot of people relying on first rate employees. We look after, you know, an enormous amount of money for our customers. You know, the nation’s savings. We have an enormous pool of investors, debt investors and shareholders. They expect a return from us, professional, you know, we can’t slip up. We can’t afford an accounting scandal. We can’t. None of that stuff.

So there’s an enormous bar, I think, that is set for FirstRand when it comes to the decisions we take now to sort of shape, you know, how we could help the country. And you’ll know, FNB’s, tagline is: How can we help you? But it is all around that helping. I think what we’ve done around transition, finance and talking specifically, say, in this energy space, I mean, we now in our Tcfd report that we published last year, we actually set out some targets for ourselves. And we spoke about the amount we would like to lend into the space. And I think the period up to 2026, we spoke about 200 billion of additional lending, specifically into transitional energy. We set ourselves a sort of a first-year target of, I think close to 30. We’ve already done that and we are on track now for the second year. And so there is commitment there. Clearly, I think the important thing for banks in many respects, we are enablers in an economy, we are not the sponsors, so what we do need is bankable projects. You know, we need sponsors to come forward. We need the legislation to be in place. We need government to have cleared the runway for us. We can be a massive enabler to a project, but we are not the sponsors.