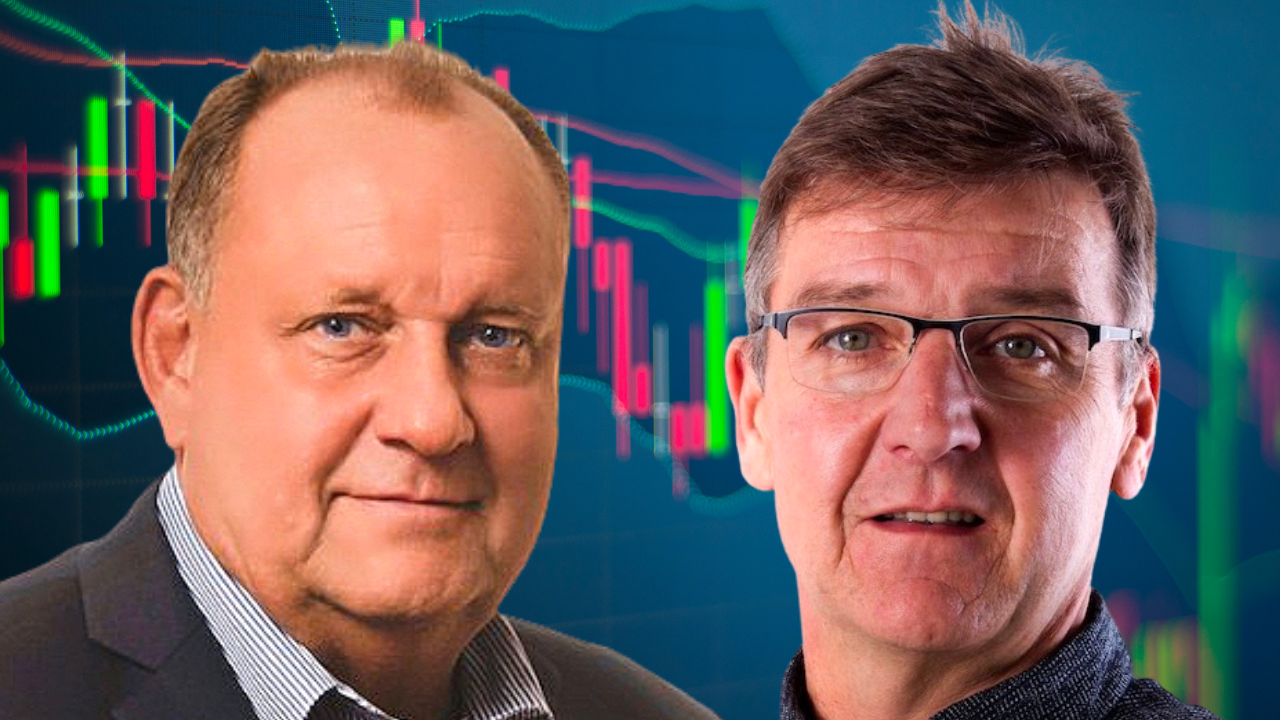 We’re 20% into the five-year Local v Offshore investment Challenge and Counterpoint’s Piet Viljoen is off to a fast start. His SA-focused half of the R1m stake has appreciated to R550 239 – a superb achievement considering substantial ‘drawdowns’ (ie price drops) reported by asset managers worldwide. Offshore-focused Magnus Heystek of Brenthurst Wealth is absorbing the full brunt of the market meltdown, with his half dropping in value to R365 470. Between the two of them, however, the R1m has depreciated by a modest 8.5%, reflecting the power of diversification as it is a significant outperformance against most asset portfolios. On the one-year anniversary of the challenge, Piet and Magnus look back at the past year and ahead to the next four. Both will be keynote speakers at BNC#5 in the Drakensberg at the end of February. They spoke to Alec Hogg of BizNews.

Excerpts from the discussion with Piet Viljoen and Magnus Heystek

Piet Viljoen on being ahead in his competition with Magnus Heystek

Piet: [00:00:58] Look, it’s as I think Naas Botha said. The Currie Cup isn’t won in May, so one has to be very cautious about that. I do think that one has to frame this debate, very interesting debate, correctly. And the way I see it, it’s not an either or debate. Do you have all your investments in South Africa, or do you have all your investments offshore? It is more a debate around how much to have in South Africa and how much to have offshore. That’s the thing we need to think about. And my argument for the past two years has been, and continues to be, that whatever your neutral allocation is to South Africa, if that’s nought, then you should have maybe five or ten percent in South Africa now, or if it’s 50% then maybe you had 60 or 70% South Africa. So whatever each person’s own individual benchmark is, if I can put it that way, your neutral position. You should have more in South Africa right now because assets are so cheap and undervalued for a variety of reasons which you can go into a bit later.

Piet Viljoen on having a diversified portfolio

Piet: [00:02:25] That’s the whole thing about diversification, you know, you don’t know what the future holds, just like we sit here in South Africa. It’s a tough environment. It’s hard, but assets are priced quite cheaply. You don’t know what the future holds. It could get a lot worse. It probably will get a lot worse. It might get a lot worse than assets are actually anticipating. And then South Africa won’t be such great investment. So that is a possible outcome. But a diversified portfolio helps you navigate the future with confidence because you have exposure to different outcomes, not one particular outcome.

Magnus Heystek on the poor performance of technology stocks this year

Magnus: [00:03:05] At the moment as you say. It is. Well, well, well ahead. But, you know, as I said, after six months, it was a question of timing and I had no control over the timing. When our BizNews community member said here’s some money it was November last year, it was at the end of a very, very long bull market for global stocks, technology stocks. And in that previous 12 years, there was no question what was the superior asset class. It was overseas, especially technology stocks. But you play with the hand that you dealt with and the community member, whom I know quite well, very smart guy. And he said, listen, you want to take Piet on? And I said, listen, you know, Piet is at the top of his game. He’s been outperforming everything in sight. But be that as it may, let me have a go. I stuck. I had no choice. I can only invest in offshore assets. My foul perhaps was I stuck to the technology stocks and got badly burned when the market came down January, February, and March. And you know, I’ve looked through the portfolio again today and I am making some changes to one of the funds that is really not performing. And we putting in funds like the Ranmore Fund that’s outperforming thanks to you Alec, I had a chat with Sean Peche. And I like what he’s thinking, but I am still overweight on technology stocks and what is burning me now.

It can rapidly turn around very quickly. In fact, we have I saw Fundsmith, you know, that big US fund, they’ve got 25% of their assets globally and in technology they are buying technology quietly at great levels, they say. Terry Smith lives in Mauritius. I bumped into him. He reckons Technology is very cheap. The other people too. So my bad luck is that I ran into Piet Viljoen at the top of his game and he’s a big call if you analyse Piet’s fund, and I do use Piet’s fund in our portfolios. Thank you very much, Piet. has been a call mainly on resources. You got the call spot on. If you analyse the last 3 to 5 years, the sectors in the South African economy that have outperformed massively was number one: resources and Piet got it right, with Exxaro and some gold in there. And then and the second line of tech was financials that have done well. So if you look at performance year to date, the South African market, you’ve got two asset classes or two categories of funds. One was resources and the other one was banks and financial services. So Piet is not only thrashing me he’s thrashing all the big brand names, I don’t feel too bad.

However, these days it’s a fascinating debate and it’s amazing how and where in the world I meet people. They say “Piet is really rubbing your face in it”.  I say it’s a five year game, but I’ve been around. Piet’s been around and Alec you’ve been around – markets can change very quickly. I’m very glad to say. And we had a very large webinar last night and over the last year, only two asset classes in the world made money in dollar terms. The one was straightforward cash US dollars, and the other one was resources. Those are the only two asset classes that made money, and that has not happened like in 100 years. Bonds killed you, equities killed you, emerging markets killed you, bitcoin wiped you out. So Piet got that call spot on and that’s his job as a value manager. And well done, I’m not changing the portfolio. In fact, because if I was a gambling man, I buy some more technology, but I don’t have much because I’ve lost a lot of magnesium. I have to slip in some cash there. But the strategy is to say, well, we don’t have technology in South Africa. It’s an asset class that we do not have and we haven’t had it for forever. And it has cost investors money. But right now, as that economist CW said, Africa progresses by means of political disasters and economic windfalls. And we had an interview, you and I, about a year and a half ago when we said South Africa got very lucky, very, very lucky that resources kicked in. It’s generating massive profits despite the fact that the volumes of exports have gone down because the ports can’t handle the the volumes and the railways can’t handle it. We have still generated a great deal of profit not only for the individual shareholders but also for the taxman and indirectly, South Africa. So, yes, that’s the game, its resources versus technology and it’s quite a fascinating challenge.

Magnus on the difference between himself and Piet

​​Magnus: [00:20:01] The difference between a fund manager and myself, who’s a financial adviser, is that I cannot go and put all my clients’ money in one fund because I like the fund or the strategy’s working right now and I bet everything on his horse and let’s hope he wins. I cannot do that. I have to diversify and that’s what clients require of you. I mean, a year or two from now we can say “Geez, the resources have taken a smack” and the technology made a very nice return to performance. That’s what diversification is all about. it doesn’t concern me that I’m not matching Piet’s performance at the moment because I’m diversified. I’m investing in other parts of the world, in other asset classes that have other cycles driving them. And that is what diversification is all about. If you think you’re going to spot the top asset class of fund manager and stick to him day in and day out, you’re on a hiding next to nothing, we’ve seen it where someone holds a massive reputation like the lady from ARK who’s lost 60 or 70%. And you know an adviser cannot do that. So I have to build a globally diversified portfolio already making changes, including some value stocks in there. If resources keeps on running and it’s fact-driven, I will start putting in global resource funds into that portfolio, but I’m not ready to pull the trigger as yet. I’m seeing a little bit of a stealth really rally in some technology stocks in the last month or so. There’s been some nice movement in markets. Warren Buffett has put a lot of money into semiconductors, for instance, $5 billion. That’s the kind of thing that you want to look for in a global perspective. But it’s fun. I’m enjoying it. Well done Piet, I’ll send you another bottle of red wine.