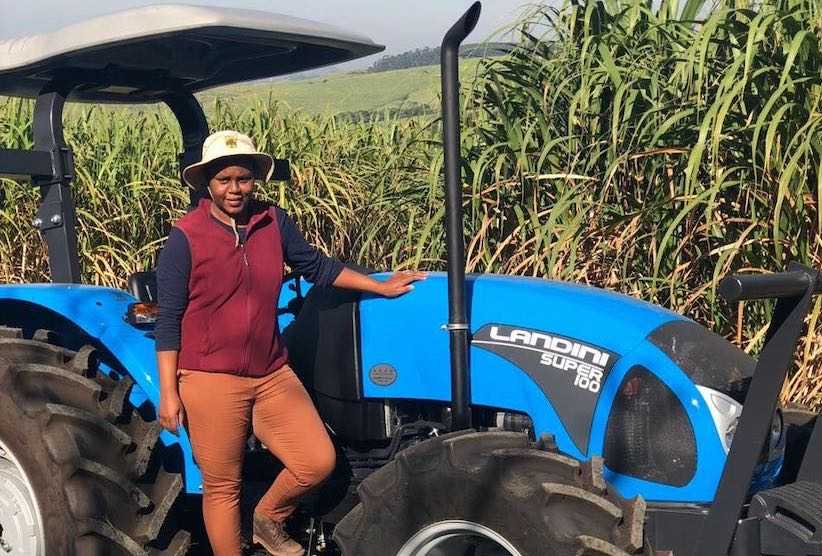 Nonhlanhla Gumede studied financial management and had a career in banking when she decided to give it all up to help her father, Mahlakaniphana with his struggling sugarcane farming business in KwaZulu-Natal. He was a former farm manager who managed to buy his farm when Tongaat Hulett offered black people opportunities to purchase farms under the Erlard Programme. Nonhlanhla joined her father in 2011 while the farm was still struggling and worked her way up and undertook further training to learn the business of farming. It inspired her to buy her own farm, which is called UThandimvelo Farm. Gumede who has already worked six hours by ten in the morning appears to take it all in her stride defying the mould of patriarchy in KZN and says black farmers need help and training if they are to manage land through restitution. – Linda van Tilburg

You know when my dad got a farm, he got a grant, my dad bought a farm in 2003; I was still in matric at the time. He got a farm through land reform; but he purchased it and financed it through the bank. That was from 2003 until 2010 when he managed to get a grant. So when he got that grant; he needed someone to come and assist him so that he could be able to take that farm further. It wasn’t a grant but something that he was going to pay back… you know after some time. So, I came back to the farm. I just resigned from my job and I decided to come back and assist him. I assisted him from 2011; working with him on his farm. You know… I did almost everything from hand weeding, from cutting of cane upwards; I went up the ranks and I ended up in his induna in 2015. I was still assisting him. So, while I was assisting him; you know I just had this passion and I just loved what he was doing. Waking up at 4:00am every day going to work and you know, I thought this is me. This is going to be me. And then after that I just decided to look for my own farm.

Which financial services company did you work for?

I worked for Absa; I was working for a bank in Durban and then after 2007/2008, I left to work in the Newcastle branch here in KZN.

Could you have done that on your own. Did you find that you actually needed technical help?

You know we did need technical help in terms of running the whole farm but my experience in banking; it did assist me. Because I did financial accounting when I finished matric and was in tertiary for three years. And then when I got that ABSA bank job, the same skills that I used for accounting, they are assisting me even now in terms of finances.

I see that you also had support from the South African Sugar Research Institute.

You know how it started? Now in 2015; I just thought; I need my own farm. My father was a bit broke at that time, so I decided to look for my own farm. So, I went to the South African Research Institute for Sugar Research and I asked them if they can pay for my course, because I wanted to do courses on sugar cane and courses on agriculture as a whole. So, they paid for me; I did courses with them and the research institute. I also did a junior management in agriculture; I did junior management in sugarcane agriculture and other senior courses; I did land production. I even went on and I did animal production with their finances.

Why I think your case is particularly interesting; as you know there is the issue of land restitution at the moment and farmers are saying that when they are given land they do not get enough support.

Ja, there isn’t enough; you don’t get enough support. You don’t; You don’t see it . So the moment when you get the chance where they give you support; you have to make sure that you grip it with your own hands, with all your hands. You need to give it with your all in this land restitution. So, that’s what I told myself. I said let me just give it all.

So, do you think yours is a good example of how the government can tackle land restitution?

You know they have to; we need them. We can’t do it on our own. You know in 2017 when I managed to buy my own farm; I took it through the Land Bank. You know… I was paying the bond and things were tight. I couldn’t even pay my son’s school fees. I had to go and work somewhere else to be able, because there was no money. All the money that you get from the farm; you have to put back into the farm.

What more do you think the Department of Environmental Affairs or Agriculture could do?

They need to train us. That’s what we need the most. We need training. We need finances. Selling sugar is not what it used to be with all the exported sugar in the country. Oh gosh, you know, it is so hard. At times I found it hard to pay my own labourers. I would employ 25 people; most of them needed jobs, but I could not pay them every month; so I had to alternate them.

Farming is a tough life?

It is a tough life but if you give your all and put your mind to it, it works. I just needed assistance here and there. Luckily I had assistance. So, for now, it is much better and I am managing to employ 50 people, working on my farm. With financial support I was able to employ more.  It enabled me to do planting, I am re-planting almost half of the farm this season which will bring more jobs to my neighbours and increase production at the farm.

Well, you are first of all a woman and you are in an area that is quite traditional, KwaZulu-Natal. Have you found a bias because you are a woman being a farmer?

You know, for us it is not that bad because you already have units that you supply for sugar, but being the female who is young, my age; it can be difficult when you go to meetings. I am the only female there and I am the only young one, but I got used to it.

How old are you, Nonhlanhla?

There’s also a lot of pressure on white farers in South Africa. Everybody is saying that they are not doing enough to help? Have you found that in your area? Are there white farmers in your area?

You know in my area I’m surrounded by two whites, Mr. Rob Taylor if you don’t mind me mentioning the name; you know he’s so good. He supports me in every way; I don’t want to lie to you. He supports me; he is there for me. If you need advice; if you need herbicides; when is the right time to spray; when is the right time to plant? Come look at my fields; there’s something that I don’t see; he is very helpful. Both of them, in fact there’s two of them. It’s him, Mr. Mark Taylor and his son. I’m surrounded by them. So, they assist me in every way possible.

So, do you think that’s a good example of how land restitution could be done in the future?

Yes it is. That’s what we need. We need them because you know, my neighbours have 40 plus years’ experience. What more can you ask for? You know these days if you want to ask somebody to come and assist you or mentor you, you would have to pay plus-minus hundred thousand a month. So, if you’ve got people like that, supporting structures near you; it becomes easy.

It is a real heart-warming story. Can I ask you something personal because I have a phobia for snakes. I remember going on holidays at Zinkwazi as a child, on thing I remember is that when you guys start burning sugarcane, the snakes come out. Are you scared on them?

Yes, they do. I’m scared of snakes, even in my house because I love in a farmhouse. You’ll pick up two or three in summer, in one day. And they are poisonous snakes. You know lately, we saw a black mamba, a long, big one. We did not trouble it and it did not trouble us; it just went away.

Are you planning to expand; do you want to try to buy more farms?

You know I’m expanding, even at the moment. I just got an opportunity with Tongaat Hullett. They have given me another land to run because they have seen my work; they have seen what I had done. You know, I’ve taken the farm that I have now in 2017; it was producing 600 tons of sugar, but at the moment, I’m sitting at 3,500 tons. So, they’re giving me another land in Tongaat. I am going to get busy with that and I’m looking forward to it. So in the next five years, I’m looking at producing over a 100,000 tonnes of sugarcane.

That is incredible. And it’s all locally grown sugarcane creating jobs.

It’s locally grown sugar and at the moment you know I’ve got students from Mangosuthu that came to me; they said they wanted in-service training. There is four or five of them. I am even building rooms for them outside my yard, so that they can be able to stay comfortable. So ja, I’m doing good things.

So Mangosuthu, what is the Mangosuthu you were talking about?

It is the Mangosuthu University in Durban. So the students, you know, when they finish their agricultural courses, they will look for in-service training and all that. So ja.

So you’re also training the next generation of farmers?

Yes, I am training the next generation, we need them, we need to have more people who are going to take this thing to the next level.

Tell me what is your message to other women, you know, who might be reluctant to take on what you’re taking on?

You know we can do it! That’s my message. We can do it. We mustn’t let men make us feel that we are inferior. We’re not, as long as we put our minds to it, it doable. You know me for, I’ve got two kids; I’ve got an eight-month old daughter but I wake up at 4am and go to the fields. I make sure everything is there; everything is done. And then I come back around 10am just to take cate of my daughter and then I’m back on the fields at one o’clock. So ja, its doable. We can do it. We mustn’t say it’s not for us, its for men, we can do it as well as men.

So how does your husband feel, is he working on the farm with you?

No, at the moment he is not in the farm, he works for the South African Police Service, he is a mechanic there.

Nonhlanhla, lovely speaking you and best of luck with the farm.