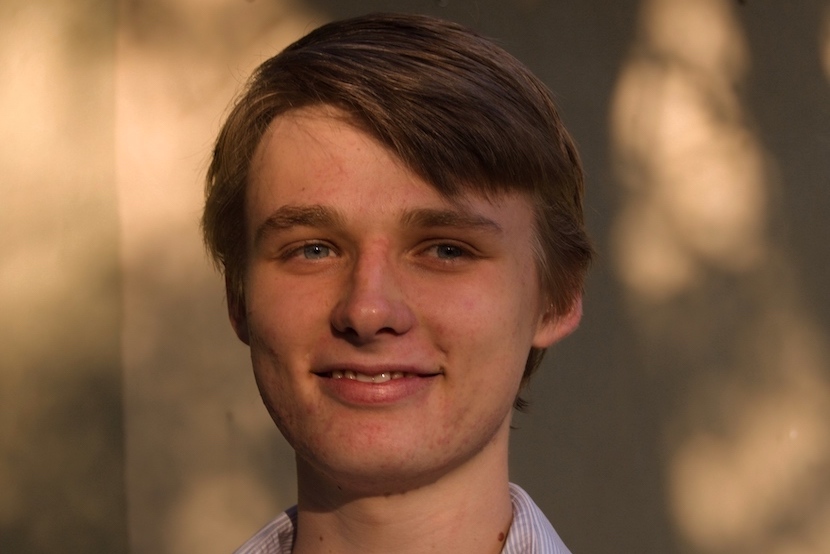 South Africa seems to have its own Sheldon Cooper. Like the physics genius from The Big Bang Theory fame, Pretoria youngster Hjalmar Rall graduated with honours in physics in his teens, he reveres Prof Richard Feynman and hope to one day be top in his field. Home-schooled after getting bored from normal school, Hjalmar graduated this year from the University in Pretoria in an online ceremony due to the Covid-19 lockdown. He tells Biznews’ Linda van Tilburg he has his eye on attending one of the Top 20 universities in the world to pursue his love for and dream of quantum physics.

Congratulations. A physics degree at the age of 17. That is incredible.

It’s been an incredible journey. Tough one, but definitely incredible. I was in public school until Grade 5. At that stage schoolwork was starting to get boring. I wasn’t allowed to skip a year ahead and my dad decided to start home-schooling me. From there, we did Cambridge pre-IGCSEs for a short while, because that would be the equivalent of Grade 7, 8 and 9. We basically had no idea what we were doing going in – testing the waters still –  but it turned out that we could pretty much do it in a few months. It was a bit hectic, but we just worked at a pace that was comfortable. From there, we did IGCSE and A-levels in about three years.

Did you concentrate on the science subjects or did you do a full six subjects?

No, I definitely didn’t do that. I could never pull it off. I only did mathematics, physics and chemistry up until A-levels, and I took Afrikaans and English until AS.

So then you applied for physics at the University of Pretoria and got in at the age of 14. How did you find the course and how did your fellow students treat you?

There were two sides: One half the students were all for it and said: Hey, we should support him and look after the little kiddo and the other half was sceptical that I’d ever make it. But everyone was really nice to me and by the end of first year, everyone I talked to had completely forgotten that I was a little kid and I was just the weird kid. I was one of the students – one of the physics students and in my third year, I was completely fitting in.

No beers after class I suppose?

And you are one of the students that graduated online this year?

It’s a bit of a pity, but honestly physics is a long journey. I want to be proud of myself once I’ve got a doctorate. This is only the beginning and it’s maybe a little sad that I didn’t get to show off, brag a bit. I’m happy with where I’ve gotten so far, and it’s nice to look forward to eventually getting a proper title.

I think you’re gonna be capped quite a few times in future. So you’ve started a honours degree at Tuks as well?

BSc was really gaining knowledge of physics. It’s only now that I feel like we’re doing proper proper work. It’s starting to have fun now. It was a bit of a slog in the first three years.

So what’s for you after Tuks? Are you trying to go for Stanford or Harvard or Oxford or Cambridge? Or do you want to study in South Africa?

It would be nice to study in South Africa for a little while. We can’t really afford to immigrate at this stage. My interest is really Quantum Information at the moment. The field has been going for a while, but it’s really taking off now. There is some serious interest in it, but it still is only the real top universities – I think there’s about 20 in the world doing active research in the field. I’m really hoping to get into Princeton,  Stanford, Caltech or maybe Ludwig Maximilian, one of the universities doing top research in Quantum Information and the specific subfield of it.

No idea what quantum information is, but give us a little layman’s insight on what you are trying to study. Are you trying to find the theory of everything? What do you want to achieve in that field?

I’m not quite that ambitious at stage. Hopefully I can end up one of the great professors who teach wonderful lectures and end up studying everything at some stage. But for now Quantum Information is a crossover between computer science or information theory and quantum stuff. It’s the mathematics and theory behind quantum computers. We can do very specific things. A quantum computer is very difficult to work with, but they can do very specific tasks like searching and prime factoring very efficiently. They use a completely different algorithm than normal computers because of their quantum nature. The problem with them at the moment is that they’re very very prone to errors. So, we need to figure out ways to build in error correction into them or to make the actual physical systems less prone to error.

So is there somebody in the world that you look up to that you would really like to study under?

At the moment, I have to say that my knowledge of the subject isn’t really good enough to say who I’d want to study under.  My role model is definitely Prof Richard Feynman. He was definitely one of the best physics lecturers there ever was, and ever will be.

Explain who he is?

He lectured at Caltech for a long time and he’s responsible for pretty much a large part of physics as we know today.

And what people ask me when I tell him about you, they would say, how did he spend his youth?  You were home-schooled and you were really young. So, socially,  how did you cope? Do you have friends from school? Do you have an online community? What is your social circle and what does that look like?

It was always a bit different. I had two good friends growing up, but we took different paths when I started home-schooling, but I kept contact with some of my old friends. At this stage, I’ve got good friends from my physics class and the year before me – a lot of mathematicians. I’ve got friends among the students, it’s not like I have a best friend but I get along very well with the students. It’s a bit of strange social life, but definitely not a non-existent one. I feel a little out of place among all the older (people), but not really. It’s never uncomfortable.

Would most of the rest of this year be online for you?

It would appear so unfortunately,  but a lot of good lecturers. Actually I like to have lectures with them directly. I think the lecturers feel that it’s better that we have the time to just publish good notes and have us read through it at our own pace. My lectures this year are very good. I have had absolutely no trouble following the notes and the other students are fairly happy with the system as well.

So when do you start applying for these overseas universities that is your dream to go to?

I’m starting to apply now. I hope to finish my degree here of course, my honours degree. I suppose I need my honours marks to get to those universities. I’d really like some more time to read through articles to get a better feel for what’s going on in the field and where I really want to be.

I’ll definitely be going through a few textbooks I’ve recently learned to absolutely love skimming through textbooks. It’s an expensive hobby but hopefully I can get a temporary job with some programming experience or something along those lines.

Would you eventually like to return to South Africa?

What’s  going to happen in all the quantum fields is up in the air at the moment. That’s part of the reason why I want to go into it. I love it so much. It’s right at the forefront of innovation and stuff in science. I guess it’s probably not going to come to South Africa anytime soon. If it does, I might come back. But for now I’d like to be right at the centre of all the excitement.