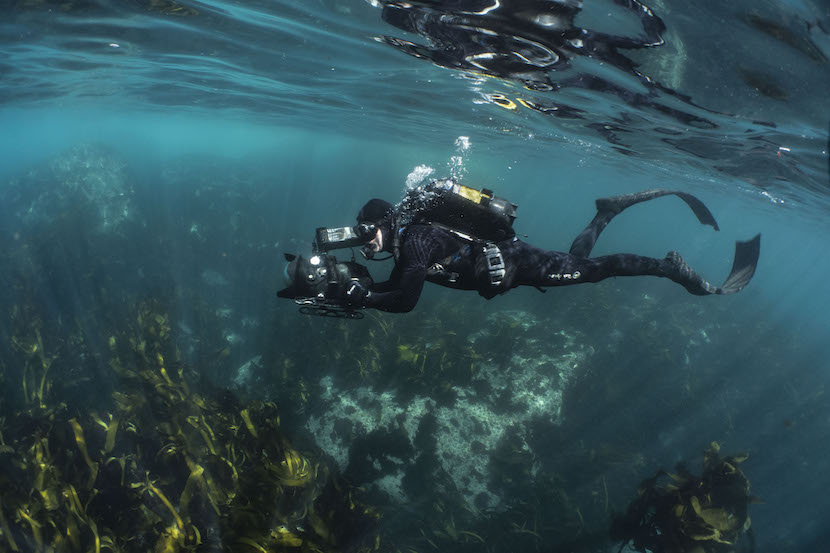 My Octopus Teacher tells the story of a Capetonian film maker and free diver, Craig Foster who needed a break from a busy schedule that was taking its toll. Turning to a life-long passion for snorkelling in the kelp forest in Cape Town near Camps Bay; he develops a relationship with an octopus. By tracking the octopus’s movements, Foster transports the viewer to the natural world and a level of consciousness few have experienced before him. I won’t spoil the story of what happened for those who have not seen it on Netflix. Suffice to say, it has become a global hit and is featured in publications as a must-see, with some celebrities filming their reactions and vowing never to eat octopus again. The film is backed by the Sea Change Project, a non-governmental organisation that wants to create awareness of the great African sea forest. Craig Foster spoke to BizNews shortly after the release of the film on Netflix and said he was still overwhelmed by the interest in his film. – Linda van Tilburg

The filmmaker and free diver said he had been working at the end of the planet in Cape Town and suddenly there were a million people interested in what he was doing. “Sometimes something just resonates with people and it’s very exciting and I’m very grateful that people are actually very connected to nature. That’s apparent and so many of the subtleties that are in the film that you might not expect people to get, they get even more. It’s very heart-warming for me.”

Several international publications have listed the “Octopus Teacher” as a must-see. This includes the Washington Post, publications in Hollywood, United Kingdom, India and South Africa and an article in the New Scientist. Foster said he never thought in his wildest dreams that his octopus movie would be received in this way. “I’ve done a lot of films over the years and some never see the light of day while some get out to a lot of people. I know how it works and this is a massive surprise.”

The short lifespan of the octopus was one of the elements in the film which brought out strong emotions in many viewers, but Foster said that was oddly to their advantage. “Many animals that have long lives are in tremendous danger because of that, and it is these animals that actually can live short and breed quickly and fast that have more of a chance in the terrifying world of today… They can turn around their numbers fast, whereas animals like the big predators are much more vulnerable because they take so long to grow to maturity.”

Foster said he never expected to form such a strong bond with the octopus that he filmed over a year and he did not know how she felt towards him. “The octopus is the most intelligent invertebrate on the planet. This animal is from way back in evolution. The split between octopus and humans is very, very far back. She’s got a totally different type of intelligence to a mammal, completely different way of thinking in many ways. Two thirds of her cognition are outside of her brain. So, I’m never sure; it’s very difficult for me to know how she feels towards me. I know how I feel towards her and she’s this incredible teacher and, I love her very much, but the other way around is hard to quantify because her intelligence is maybe as much as a cat or dog, but it’s a different type of intelligence that I don’t think we fully understood yet.”

A stirring moment in the film is when the octopus reaches out to touch Foster. “Her touch is also different – in that she can also taste with her suckers, so it is a very intimate touch when an octopus touches one. In fact, when any animal touches one, some kind of bond is formed. When an animal decides to reach out, it’s risking itself because it’s not sure. It’s a much bigger thing and creature and it’s not sure. So that is obviously a powerful experience.”

The octopus that Foster followed for so long was never given a name.  Foster explained that he did that on purpose.  “I didn’t want it to become like a pet or curiosity or just some arbitrary thing. This is an individual animal living this extraordinary life in the great African sea forest. And you know, she’s my teacher and that’s why I didn’t give her some arbitrary name.”

Read also: 36 hours and 337 km on a bicycle: Saving rhinos through extreme sport

The kelp forest that Foster swam in every day can be an intimidating environment for divers, but Foster said he thought it was safer than being on land depending on the roughness of the sea. “It’s a tremendously protective environment. There’s nothing within the thick kelp forest that can harm a human. It’s like an underwater home for me and it is the same for the group of people working in the Sea Change Project.”

Although the story centred around the relationship that Foster developed with an octopus, he said it was a collaborative effort and many talented and dedicated people with teams from South Africa, Holland, the United Kingdom and the US were involved over a long period of time to make something special.

“I feel I’m just a cog in the wheel of all of this. People say it is my film, but it is a team thing. I just happened to be there and speaking. I spent a lot of time in the forest and I was lucky enough to have this special relationship with this animal but it takes an enormous amount of effort to bring that out in a way that people can then get it and that’s the real genius of it and the team is responsible for that.”

The pyjama sharks that lurked in the kelp were part of the story, but Foster said they were no threat to humans as they only grew to just over a meter. “Obviously, if you’re in murky water and a Great White swims up to you, you’re going to get a bit of a shock but it’s very rare to have encounters with them unless you’re baiting them specially or trying to go diving with them. I have done that in the past, dive with white sharks and they’re not near the reputation they have. They’re quite shy creatures actually. Sharks are not a big part of the fear factor here for me at all. It’s really not. They are in our psyche. A lot of people are scared. Like I said, if you first go in the water, you are scared of the kelp, you are scared of sharks, but what you should be scared of is drowning.”

As he spoke, Foster noted that a whale had just passed him. “The danger is the wild Cape of storms, the Cape of Good Hope as well, but where your biggest danger lies, is drowning, not any animal here. If anything, the kelp forest will keep you alive, because it’s kind of a flat structure and it breaks some of the swell as well.”

Many film makers try to get their product onto Netflix, but it is not easy.  Foster said it was difficult for him as well to get the attention of Netflix and it was turned down the first time, but was seen by the right person and “it was like a bit of a miracle…that obviously makes a huge difference because suddenly you can reach a very, very big audience with your message. I mean the whole motivation behind spending so much time and what we do, is very much to do with conservation.

“Our group, our whole idea is to try and get this great African sea forest, kind of the home of the octopus teacher recognised as a global icon, like the Serengeti or the Great barrier reef, because nobody really knows about it and no one realises just how important this ecosystem is in terms of biodiversity, in terms of how important it is for the planet. People have sort of forgotten that the biodiversity of nature is our life support system.”

“It’s the reason that you are breathing in London and I’m breathing here and someone in Hong Kong or America is breathing because the ocean is providing most of our oxygen and all our other systems, all our health systems, every single thing we do basically is supported by the natural world and that’s been forgotten. So, we’re trying to, in a way, that’s more like instead of pointing fingers and saying you’re doing bad stuff, or you’re doing this is to show how valuable it is and how beautiful and how poignant it is and to try and motivate people to think, hold on, we need to try and think about regenerating this natural system if we want to survive as a species.”

One of the questions that Foster did not want to answer was” for how long he could hold his breath.  “I’m very reluctant to say. It’s a funny thing. Under perfect circumstances, I can hold my breath for a very, very long time but if I tell you how long, then it goes out and it could give the wrong message. So, I mean, it depends on so many things. If it’s very rough and you’re working hard, you can hold your breath for a very, very short time. If you’re very, very relaxed and there’s some incredible animal behaviour guide going, for a very, very long, long time, but I tend not to actually measure that. I’m not measuring how long I can hold my breath, but it’s certainly good enough for diving in this environment.”

So, what is next for Craig Foster and his team after the success of ‘Octopus Teacher’? ‘Just really recover, first of all, from this. It’s a strange process for me, it is getting so much feedback. I’m trying to actually go back into deep nature and develop my tracking skills and my skills in nature to refine them to see what emerges. Remember, this film, it wasn’t like planned. So, if you go into nature and you just kind of open up and then see what comes up, the filmmaking process is a completely different scenario, especially with a Netflix, it’s very, very demanding. So, you’re not going to  be churning out those kinds of films, because that ironically distances you from the very thing that you are connected to.” 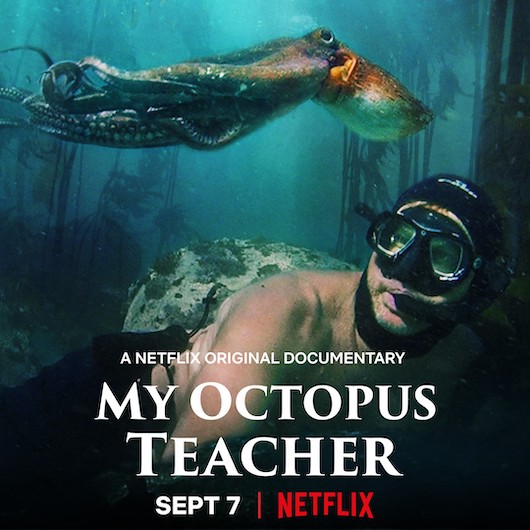 “You’ve got to be quite careful with that. So, I’m now going back into deep nature and spending more time there and then seeing what will come out of that. Continuing to try to do the conservation work is a big, big factor too and introducing young people. I do that anyway, but trying to do more of that, do more work with local people to get them to love the place and to love this great African sea forest, because then they naturally will protect it. So, we’re doing all those kinds of things as well, not just only focusing on the film work.

Asked whether he thought there could be renewed interest in some of his previous programmes on the San people, Foster said he was not sure. He described the San as the real masters of  understanding the natural world.  hese films about the San are not accessible to the general public and he said those who want to see them should ask Netflix.