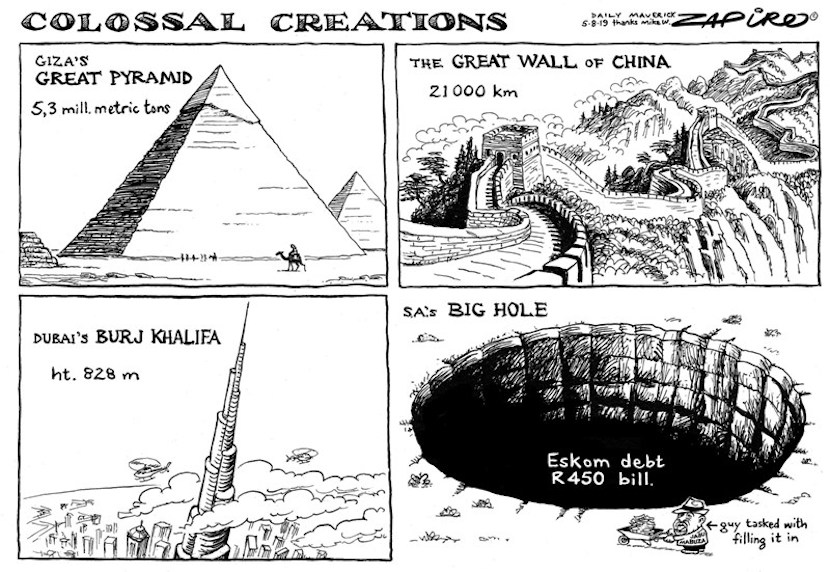 Debt threatens South Africa’s economic prospects, warned Finance Minister Tito Mboweni recently, and Eskom’s stands at about R488 billion. Hundreds of billions in bailouts for Eskom and other state-owned enterprises have widened the budget deficit and the economy has been stuck in a recession as power cuts weighed on output. In addition, credit agency Moody’s relegated SA to junk status, citing “unreliable electricity supply, persistent weak business confidence and investment” as additional burdens to the country’s economic growth. Eskom provides about 95% of the nation’s power, mainly from coal. Finally it seems that the utility will have to relinquish its iron grip on the electricity industry and allow independent producers into the grid. The cities of Johannesburg and Cape Town are planning to switch to more sustainable sources such as solar and wean themselves off the utility that’s subjected them to load shedding for the past 13 years. – Lindiwe Molekoa

By Gemma Gatticchi and Monique Vanek

(Bloomberg) — South Africa’s biggest cities are preparing to source their own power after the energy ministry this month approved letting them wean themselves off the state utility that’s subjected cities to outages for the past 13 years.

Johannesburg and Cape Town, which have a combined population of about 10 million people, plan to diversify away from the electricity produced mainly from coal by Eskom Holdings SOC Ltd. to more sustainable sources such as solar and power generated from landfill gas.

“The City is looking at 300 megawatts of renewable” energy, Kadri Nassiep, Cape Town’s executive director for energy and climate change, said by email. “If all clarity is obtained and plans forge ahead, we could start seeing greater diversification of our energy resources as a city in about three to five years time.”

In addition to improving security of supply, the move will allow the cities to boost their fight against climate change by using power that doesn’t result in the emission of greenhouse gases. Still, it will slash revenue for Eskom, which is struggling to service a $30 billion debt bill.

“Internationally many cities are at the forefront of dealing with climate-change disasters and so have adopted proactive climate-change responses,” Lauren Hermanus, director of Adapt, a South African company that provides consultancy services on sustainable energy, said in an interview. “We are also all aware of Eskom’s related operational, governance and fiscal challenges, most clear in our bouts of load shedding,” she said, using a local term for power outages.

South Africa produces the same quantity of greenhouse gases as the U.K., which has an economy eight times larger. Eskom, which runs a fleet of coal-fired power plants, is the country’s worst polluter, accounting for about 40% of the greenhouse-gas emissions.

Cape Town plans to build a photovoltaic solar power plant by the end of the 2023 financial year, as well as sourcing additional sustainable energy, Nassiep said. The city took the energy ministry to court this year to win the right to source its own power. The judge ruled that further negotiations with the government should take place.

“We intend putting out a tender for renewable-energy plants embedded in our grid in the next year and we would like to source renewable energy from large independent power producers as soon as is feasible,” he said.

The city would also like to buy power from residential and business customers who have installed solar panels on their rooftops and have excess power to spare.

Johannesburg, South Africa’s biggest city and financial hub, is considering sourcing power from solar plants and landfills, where gas from rotting garbage can be used to produce electricity.

The initiative is driven mainly by Eskom’s unreliability, the city’s commitment to reduce carbon emissions and the need to protect customers from rising power prices, said Isaac Mangena, a spokesman for Johannesburg’s City Power utility.

“City Power is still at early stages of the initiative and we expect the process to take at least 2 years,” he said.