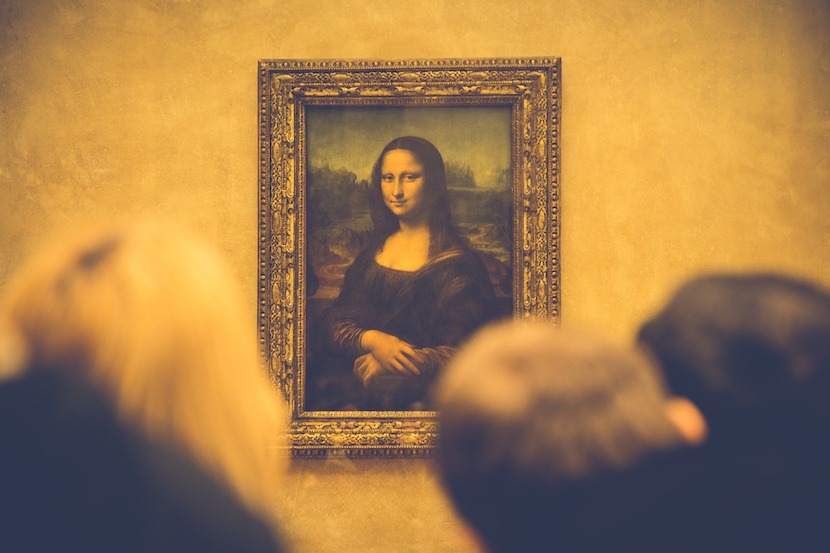 As an avid art lover myself, I must admit that I have also gazed in confusion at creations that I did not consider ‘art’. What could the artist have been trying to say by suspending a toilet in a gallery? Is it a comment on our society or just someone having a laugh? In this amusing piece by Lesley Stones, we’re reminded that our choice of art is always down to personal taste, but that there’s nothing wrong with looking deeper and asking questions to discover the artist’s intention. This article first appeared on FirstRand Perspectives. – Claire Badenhorst

How not to be an art pleb

Strolling through the Louvre, I realise my mind has already left the building. It’s contemplating the gateau I’ll enjoy later in a lovely Parisian patisserie. Gazing at the paintings in Madrid’s Prado gallery, I’m glad I arrived after 6pm to avoid the entrance fee.

By the time I’m despondently trudging around New York’s Museum of Modern Art, I suspect I have some debilitating mental deficiency with an inability to be moved by great art. But it’s embarrassing having a cultural vacuum in my head, so I’ve delved into art appreciation to see if I can be saved.

Artist and gallery owner Michael Chandler feels my pain. He studied art history at university, which involved reviewing different shows. “I remember a very powerful moment when I said to our lecturer ‘this is rubbish,’ and he chastised me in front of everybody. He said ‘someone took a lot of time to make this, and you should give them a little of your time to understand what they’re doing’. It was a very humbling moment,” he recalls.

Artists are all trying to say something in some way, even if we don’t have the tools to see it, he believes. “It’s not a form of fast entertainment like Netflix, it actually requires labour,” he says. “A lot of art is based on what’s gone before, so there are historical things you need to know if you’re going to appreciate it. It’s like watching an episode of a long-running soap opera and not understanding why a character acts that way because you haven’t followed the whole story.”

We start big, by discussing Guernica, Picasso’s grey, black, and white painting condemning the Spanish Civil War. Chandler describes it as an extraordinary painting, although it struck me as a bit of a muddle.

He sighs and switches to The Last Supper by Leonardo da Vinci. “You could say it’s kind of cute, there’s Jesus and all his friends hanging out. But when you look in, you see Jesus can’t even look at Judas when he says ‘one of you is going to betray me.’ Suddenly you have a moment of absolute humanity – it’s an incredibly dramatic moment in art history. If you do a bit of research and ask questions, something that was quite obscure becomes very moving and powerful,” he says. “When I saw Monet’s Water Lilies in Paris three years ago I burst into tears – it was the most beautiful emotional response I’ve ever had in response to something stationary.”

He makes a fascinating point about analysing the art you dislike as well as the works you admire, comparing it to being at a concert you’re not enjoying. “Take a deep breath and ask why it’s upsetting you,” he says. “You’ll learn more about yourself than if you just went somewhere very pleasant. Art has an ability to teach us more about ourselves.”

My brain starts to tingle as it shakes off its ignorance, so I throw in a big one. Mark Rothko – seriously, how can his blocks of colour be worth millions? Chandler sighs again. “He was one of the first to do colour fields as an emotional response to colour, and as he got more depressed he started painting in more and more shades of black, and eventually he committed suicide. That’s someone really trying to use art to clear their demons.”

Chastised, I ask if there are any artists he dislikes and won’t display at his Chandler House gallery in Cape Town. He talks of contemporary jumping on the zeitgeist of ‘identity politics’, and others turning out big, bright, colourful ‘modern art’ with abstract faces. “It’s so naff and derivative and not exciting at all, but people are buying it because it will look amazing with a white leather chair and a lampshade,” he tuts.

We talk of stuffy old portraits painted before cameras existed, and how photography killed representation in art and led to impressionism as artists tried to portray the mood and light that cameras couldn’t capture. “It led to doing whatever the hell you wanted because art had to reinvent itself,” he explains.

Artist and psychology Maritha van Amerom agrees that there’s a big difference between appreciating something and actually liking it. Appreciation hinges on understanding where it comes from or what makes the artist or the work unique, like the story it’s telling, the use of colour, the use of lines, or the composition.

Van Amerom studied psychology at the University of Pretoria, then became a full-time artist, and now operates in both fields. “My own medium is ink and it’s like psychiatry. When you work with ink it spreads or drips or falls on the canvas and the mark just happens, and you need to work with it, just like life.”

Initially, she didn’t like Jackson Pollock’s works, like his ‘Red Composition’ experiment with a drip technique. “But after I looked at the intricate markings it became almost beautiful in an abstract sense. With Rothko I was awestruck with the intensity of the colour. There’s nothing in it like a Rembrandt or a Van Gogh, but the way he uses colour is unique.” Yet people can get swept along by popular opinion, she believes. “Sometimes I get angry when I go to galleries. People do take chances – like that weird guy who taped a banana to the wall.”

She’s referring to a banana in the Perrotin gallery by Maurizio Cattelan, tellingly titled ‘Comedian.’ Three buyers paid between $120,000 and $150,000 for various versions of it. “I thought that was ridiculous. To me, it was making a statement of how – gullible isn’t the right word – but how you can tell people it’s art and if you sell the story hard enough they’ll agree,” she says.

Art plebs like me fear that everybody else is more knowledgeable and understands what an artwork means. That’s not true, says art historian Dr Laura-Jane Foley. “Everyone is equal in front of an artwork and there are no wrong answers.” In a Readers Digest article helpfully called How To Understand Art, she encourages you to look at the formal elements first. Do the colours evoke any strong emotions? Are the brushstrokes visible? Are they large or small? What is being depicted? Does it remind you of anything in history, current affairs, or in your own life?

Christies auction house even offers an online course called Speak with Confidence about Contemporary Art for $245, teaching you how to approach art, form opinions, draw meaning from it and hold erudite discussions. It only lasts two and a half hours, so it can’t be that tough to master.

Understanding abstract art certainly sounds easy – all you need is an open mind and a wandering imagination, says ArtMine.com. The artist uses imagination to look beyond the physical world and capture emotions on canvas. It doesn’t need to have a meaning or an explanation. It’s up to the viewer to connect to the artist’s intention by freeing your mind of other thoughts, focusing on how the painting makes you feel, and letting it convey its intended emotion to you.

Kit Messham-Muir, a Senior Lecturer in Art History and Theory at the UK’s University of Newcastle, explains that our brains absorb a range of clues and perform a complex split-second process that makes up our understanding of any image. An artist makes very deliberate decisions about the materials, style, and approach, and these feed directly into the overall feel and meaning of the work, he says. Other clues come from the wall label or your own knowledge about the artist. Writing for The Conversation, he adds: “Naturally, an artist born in the Soviet Union in the 1930s is going to have very different life experiences from one born in Spain in the 1960s.

Plenty of people have pranked the art world with hoaxes to see if the experts really know a Monet from a monkey. My favourite is the story of Pierre Brassau, whose work was exhibited at Gallerie Christinae in Göteborg in Sweden. Art critic Rolf Anderberg wrote that “Pierre Brassau paints with powerful strokes, but also with clear determination. Pierre is an artist who performs with the delicacy of a ballet dancer.”

Brassau was actually a chimpanzee who had been recruited to test the critics. To his credit, Anderberg stuck by his verdict that Pierre’s work was still the best in show! Other glorious hoaxes have seen an Ikea print passed off as high art, and David Bowie and William Boyd publishing a book commemorating Nat Tate, an artist they invented. What I’ve learned is never to dismiss anyone’s work as talentless, in case I’m still just a pleb who doesn’t get it.