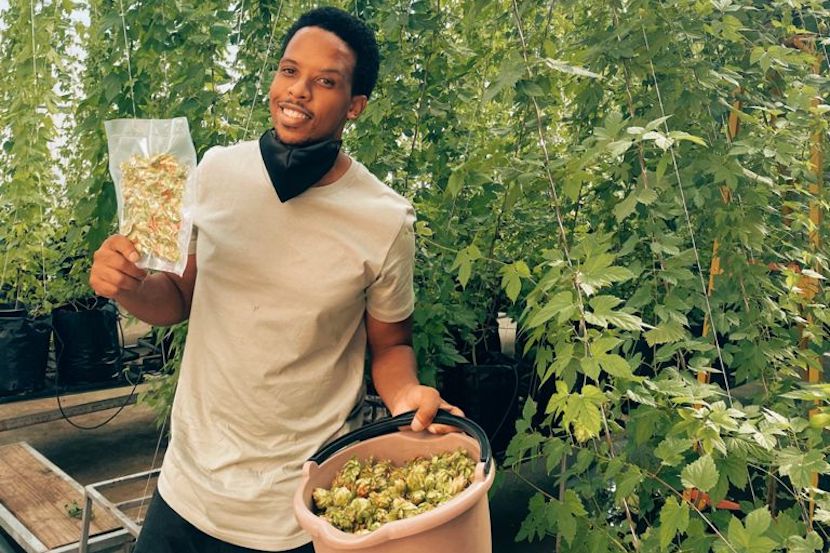 There are amazing grants and programmes in South Africa, which have put enterprising young people on a path to invent, grow and thrive. One of them is the Urban Agriculture Initiative (UAI), operated by an organisation called Wouldn’t it Be Cool (WIBC). Khaya Maloney secured a sport and completed a three-month scholarship to grow hops. This young entrepreneur was thinking big and started growing four season hops on a Johannesburg rooftop, a first for South Africa. The founder of Afrileap told BizNews about his passion for hop growing. – Linda van Tilburg

Khaya Maloney on where his journey began:

It all started in 2016, [on a] Sunday evening at 8pm. I’m sitting with everybody, watching TV and I switched over to Carte Blanche. I see they’re covering this documentary about Brooklyn Grange in New York. It was about these young, agri-entrepreneurs – guys that were planning a gardening site on the rooftop of old dilapidated buildings. I thought it was interesting; they were using hydroponics and moving soil all the way up on top of the building, just growing things for the inner city, supplying restaurants and supermarkets with fresh produce.

It’s a genius idea. I did [some] research and found out that there’s an initiative like this, an urban agriculture initiative. It hadn’t started, but it was the first of its kind in South Africa. [They] were planning to put 100 rooftop gardens on top of buildings in inner city Johannesburg. I thought that was brilliant.

On why he chose to grow hops:

When the idea of agriculture came, I thought, “okay, this the next step in agriculture, rooftop farming in a city.” So, I experimented. I had no experience. Nobody in my family had a farm or anything – I didn’t know what I was going to grow. I just came up with the idea. I then joined an incubator. In this incubator, there was a bunch of young people who qualified to be part of the programme. We all went through this course [from WIBC]. They basically teach you the business model – one thing you don’t know about farming is that it has a lot to do with the numbers. It’s a numbers game more than it is anything else. They taught us about business models, we had to learn about the different spheres of farming and then, in the last two weeks, they teach you about hydroponic farming.

From there, everybody was already presenting. They came with an idea in mind. I was the last one to choose. One of the classes I attended, they mentioned SAB, how they make their beer and all the things that go into it – barley, malt, hops – and I learnt that they own about 100% of the hop yards in South Africa. I came up with this idea of a four season greenhouse that grows hops to supply to craft brewers in South Africa.

On how hydroponic farms work:

[It’s a] controlled environment [and agriculture]. That’s basically what greenhouses are. Essentially, you manipulate the plant into thinking the conditions are the same to where it grows natively. Hops are very specific crops and they love specific conditions – they only grow in the southern Cape of South Africa, [around George].

They have about 16 hours of sunlight everyday, whereas we have around 12 to 14 here in Johannesburg. I had to get grow lights added to my structure. The magnificent thing about greenhouse agriculture is [that] there’s no need for soil. It has a reservoir tank that it uses – which is around 500 to 5 000 litres, depending on the size you need – to run consistent water, with a pump that generates water that goes right through the system.

I use a Dutch bucket system. It’s a medium in which you plant your thing and then they grow – and it’s nutrient rich. The water runs through the pipe from the reservoir, right back out the and fertilises the roots of the plant. It then directly dials the nutrients into the plant root.

On how the rooftop farm is going:

I rented a 300m² greenhouse, with all the gadgets – all the environmental control features that come with it. It had 550 plant sites. I’ve harvested twice already and this was my first winter harvest. The concept of a four season hydroponic greenhouse is something that’s never been done before in South Africa. I tested it using data, reverse engineering, growing [and] failing.