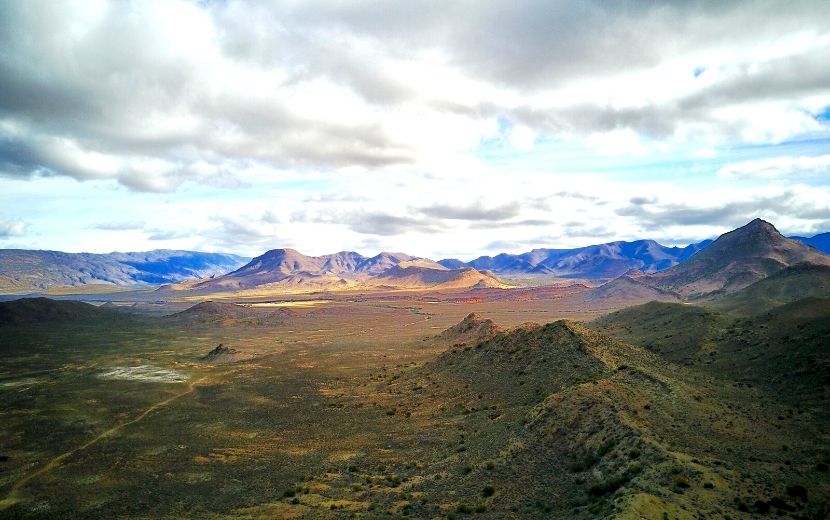 Perspective is hard to come by these days. To most people, the Karoo is a dry, vast expanse of – for the most part – nothingness. To Robert Broom and other inquisitive scientific explorers, the Karoo held the key to what would define their life’s work. Broom, who’s curiosity was sparked in 1897 when he walked into a London exhibit of old South African fossils, is best known for his discoveries of hominid remains in the mid-1930s. Broom specifically came to South Africa in order to explore the evolutionary origin of mammals by undertaking research on the therapsid fossil record from the rocks of the Karoo. Ironically, Broom believed in spiritual evolution, which sees animals and plants as too complex to have arisen by chance. However, as this article shows, we owe much of our understanding of human evolution to his pioneering, paleontological adventures. – Nadya Swart

The karoo – cradle of the mammals

Africa may have been the cradle of Humankind, but the continent was also the birthplace of the order to which we belong – the Mammalia.When Dr Robert Broom walked into a London exhibit of old South African fossils one day in 1897, he did not know his life was about to undergo a radical change. The newly-qualified Scottish obstetrician noted several reptile skulls with temporal openings behind the eye sockets – which is a feature in mammals. Excited, he walked out and booked a passage to Cape Town, chasing a dream – to discover the evolutionary missing link between reptiles and mammals.

He arrived with his wife Mary and settled in a country on the brink of war. When peace returned, he landed the chair of Geology and Zoology at Stellenbosch – but was kicked out after four years, by theologians who resented his lectures on evolution. This happened despite his ‘spiritual’ ideas on evolution, which were decidedly non-Darwinian.

So, it was back to obstetrics and hand-to-mouth living – but in the fossil-rich Karoo. Broom made friends with a local roadbuilder called Croonie Kitching of Nieu-Bethesda, who came across fossils in the course of his work. He met S.J. Rubidge, founder of a fossil hunter dynasty which is currently headed by Professor Bruce Rubidge of Graaff-Reinet.

Those early workers didn’t know about Plate Tectonics – which had shaped the landscape in which they worked. The Karoo was once the heart of Gondwana, an enormous continent destined to fragment into parts such as Antarctica, still attached to Australia, which was joined to the east coast of South Africa. Africa and South America were snuggled up tight, like a couple sleeping spoon fashion. That was 350 million years ago, in the Carboniferous period. In the Permian, the Karoo drifted south toward the pole, and early glacier-scraped strata of that time are devoid of fossils. Subsequent rocks recite the tale of mammalian origins, spanning 50 million years and three geological periods – Permian, Triassic and Jurassic.

When Gondwana drifted northward again, a shallow sea covered the Karoo, and there is evidence of marine life, such as a small swimming reptile, Mesosaurus. From the mid-Permian onward, sediments began to accumulate in this sea. After the Cape fold mountains were formed, new rivers rushed into the basin, bringing plentiful silt, which created an immense floodplain covered with lush growth.

The dominant creatures in this landscape were members of the Therapsid order, descended from amphibians yet possessing increasingly mammalian features. Their fossils are found abundantly in strata known as the Beaufort series. On top of the Beaufort beds lies the late Triassic Stormberg series, containing some fossils which are so ‘unreptilian’ that they were initially classified as mammals.

The evolutionary saga which began with ice ended in fire, and a colossal outpouring of basaltic lava, which wrote an end to the story in the rocks and created the Drakensberg. But today the Beaufort Beds remain – 200,000 square kms in area, up to three kilometres thick and full of fossil remains. A dramatic outline of evolution began to take shape as specimens came to light and Broom’s scientific papers accumulated.

The Karoo fossil sequence begins in the middle Permian, 240 million years ago, with amphibian-like creatures such as Bradysaurus. In the early Triassic, once vertebrate life had established itself securely on land, the course of evolution suddenly forked into several divergent paths. Turtles, crocodiles, frogs and snakes appeared. The reptilian lines that would eventually lead to birds and mammals remained unbroken as the aeons went by. A fascinating succession of species rose and fell according to Darwinian selection pressure.

Despite their name, the Dinocephalian or ‘terrible-headed’ reptiles were harmless herbivores, preyed upon by the ferocious Rubidgea, a carnivorous ‘Gorgon-eyed’ Gorgonopsian, first described by S.J. Rubidge. Both these orders were extinct before the end of the Permian, after enjoying a 30-million-year heyday. Other therapsids such as the Dicynodontia, beaked herbivores with turtle-like heads, outlasted them and survived into the Triassic. The first mammals are thought to stem from the Cynodontia, reptiles which arose in the late Permian and became dominant in the Triassic.

Broom and his colleagues collected fossils by the dozen, but the greatest fossil hunter title must go to the late Professor James Kitching, son of the road builder Croonie. After World War Two, when petrol was in short supply, he would knock the gearbox of a borrowed car into neutral and freewheel down hills to save fuel as he searched the Karoo. He ended up with a lifetime ‘bag’ of some 8 000 fossils. A tireless worker with an unerring ‘nose’ for fossils, he sniffed out important finds on several continents, including Antarctica, where Kitching Ridge was named after him.

Such a wealth of finds allowed paleontologists to trace evolution in detail. For example, therapsid jaws were made of several bones. Over millions of generations, three of these migrated up to the hinge, in a much smaller size – to become the hammer, stirrup and anvil combination for mammalian hearing. Reptilian teeth began as tiny pegs, and evolved sockets as the aeons went by, adapted for different functions – molars, incisors and canines. As the strata piled up higher, loosely-knit lizard brain cases gave way to robust, tightly-sutured skulls. Plates inside the mouth grew inward and met, becoming the bony palate, which permitted animals to breathe and eat at the same time.

Throughout the Permo-Triassic, evolution continued at an accelerating rate, giving rise to increasingly sophisticated creatures with advanced survival capability and more energy-efficient metabolisms. But despite being the product of evolutionary refinement, the new Mammalia order took second place to the ‘terrible lizards’. That is, until the dinosaurs’ number came up – perhaps because of the Chicxulub meteorite impact. All the great Jurassic and Cretaceous lizards of the land, sea and air died out before the start of the Tertiary period, 65 million years ago.

They left a wealth of empty ecological niches which the tiny, struggling mammals commandeered – and rose to world domination. The egg-layers were out of power, while furry, warm-blooded mammals fanned out into a myriad of species. These include Homo sapiens, which is creating its own Anthropocene strata – characterised by pollution deposits and fulsome evidence of global warming.

Dr Robert Broom died in 1951, full of honours at the age of eighty-one. In the last thirty years of his life, he had switched from the study of therapsids to much younger ‘missing link’ primate fossils, working at Sterkfontein not far outside Johannesburg. He discovered Plesianthropus transvaalensis, the ‘almost man’ of the Transvaal, which eager pressmen promptly nicknamed ‘Mrs Ples’. Nowadays it’s known as a specimen of Australopithecus africanus. His next find was the hominin Paranthropus robustus.

Robert Broom and his contemporaries laid the foundations, back in an era when spiritualism was popular. Some scientists still believed that there was an ‘author’ behind evolution. Today the work goes on as cold, hard science. Paleontologists use modern tools to solve cold cases from the Permian and Triassic. Such knowledge gives a humbling perspective, as we mammals study how we began – as therapsids who got lucky.