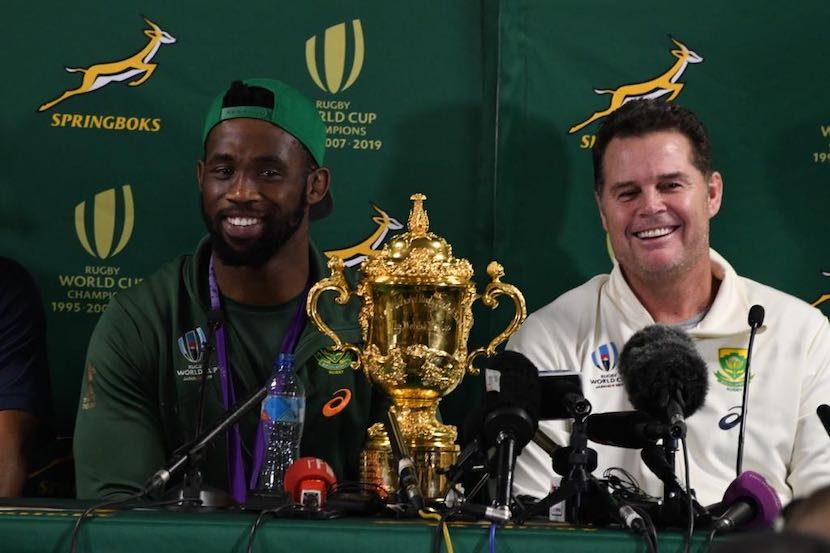 South Africans will never forget the moment Springbok captain Siya Kolisi lifted the Webb Ellis Cup at the Rugby World Cup against England in 2019 to screams of utter elation. It’s one of those iconic moments that will go down in SA history – along with Nelson Mandela presenting Francois Pienaar with the trophy in the Springbok captain’s number six jersey in 1995. We got to relive some of the magic when M-Net released the ‘Chasing The Sun’ documentary of the Boks’ journey to the World Cup in Japan. The victory was significant for so many reasons. Not only was 2019 a particularly difficult year for SA morale, but our rugby team itself was made up of players from all walks of life – it was finally the kind of team that could unite our bruised and battered country. As Simnikiwe Xabanisa explains below, it was this realisation that moved Rassie Erasmus to change his tune and remind his players what they were playing for. This article first appeared on FirstRand Perspectives. – Claire Badenhorst

The dawn of the socially conscious athlete

WHEN Rassie Erasmus – a man whose obsession with attention to detail could be accused of taking the romance of the unexpected out of sport – began coaching the Springboks, his philosophy was “keeping the main thing the main thing”. What that meant in English was the most important thing was getting the rugby side of things sorted out first and then the bells and whistles of inspiring and uniting South Africa as a nation would take care of themselves.

And coming from the nation which gave us Francois Pienaar’s iconic but now clichéd “we had 43 million people behind us” quote from the immediate aftermath of the 1995 Rugby World Cup, putting the inspiration cart before the winning horse is a simple enough mistake to make.

But then came the week of the 2019 Rugby World Cup final, where Erasmus found himself stuck with a team a little flat on the motivation needed to help them atop the summit. He did an about-turn and asked them to do it for South Africa – and we all know how that went.

Just before the Springboks overcame their underdog status in the final to beat the well-heeled might of England, Moody’s had just given South Africa’s economy a negative rating; in the same year in which 1995 heroes James Small and Chester Williams passed on; this in a country grappling with enduring racial division and an inexplicably violent culture to its women and children.

For South Africa, 2019 was 2020 without the global bad press. “The coach didn’t like those ‘give people hope’ chats, he just wanted us to play,” explained Springbok captain Siya Kolisi in the documentary on the World Cup win, Chasing the Sun. “But by the final, he saw what was going on in our country and started telling us about pressure.

“I was always the guy who never said we must give people hope, you first had to play well to do that. Now you are playing well and you can give them hope. [But] Do you guys agree that you’re not representing yourselves today?”

The most important thing for professional sportspeople is the “why” they do it. Stormers head coach John Dobson once outlined the sometimes polar opposite nature of the different things that drive players in a sample size as small as a 23-man matchday squad.

“We’ve got guys paying what they call Black Tax, where they are remitting money upstream to support their families,” he said. “That’s quite a powerful driver but it’s completely different to [World Cup-winning Springbok] Pieter-Steph du Toit’s driver [because his family owns a wine farm].

“Yet we tend to treat them the same.” The easiest way to treat players the same, or to put their drivers under one umbrella is playing on man and woman’s desire to be part of something bigger than themselves. Few epitomised this like the Argentina rugby side which beat New Zealand for the first time in the Tri-Nations last year.

That shock victory – the Pumas’ first ever over the All Black – had its roots in the depths of the Covid-19 pandemic ravaging Argentina, which at the time was reported to be recording 10,000 cases and 300 deaths a day, with doctors having to choose which patients got put on ventilators.

The team itself had seen its head coach Mario Ledesma and 15 others contract Covid and had trained in their living rooms, gardens, and makeshift gyms in garages before being banished to train together in Montevideo in Uruguay. Watching the game that day, one could see that the fact that they were doing it for their country had been clearly communicated, with captain Pablo Matera driving it.

Matera, whose performance was such that this writer was moved to tweet he’d won the argument, the fight, the ball, and hearts, put a neat exclamation mark on that message with the viral remark he made after a scuffle to the referee: “They must show some respect. I’m playing for my country.”

That Matera’s halo would slip a few weeks later for racist tweets written in 2011 and 2013 goes some way towards vindicating Erasmus for not trusting going the nationalistic way as a means of motivating the team.

And the fact that Argentina’s rugby bosses – having stripped him of the captaincy – buckled under pressure and didn’t punish him so he could hopefully lead them to more patriotic fervour-fuelled victories completes the point.

Where playing for something bigger than oneself is going in the right direction is with superstar players like Manchester United’s Marcus Rashford, Kolisi and Formula One’s Lewis Hamilton, among others, who have embraced the idea of a socially conscious athlete.

Rashford, whose basic salary of 200,000 pounds is the equivalent of winning the lottery weekly, broke the over-indulged footballer’s mould when his campaign pressured the British government into rescinding its decision not to provide vouchers for over a million children during last year’s summer holidays.

The 23-year-old’s vow to the BBC that “I am fully committed to this cause, and I will fight for the rest of my life for it”, is quite a departure from fellow footballer Jermaine Pennant, who was once so flush he “forgot” a Porsche he owned at a parking lot when he left Spanish side Real Zaragoza in a huff years ago (true story).

Seven-time F1 champion Lewis Hamilton’s road to the sport’s elder statesman has taken in the sights of him being McLaren’s PR invention, the quintessential F1 playboy (complete with an apartment in Monaco and a pop star girlfriend in Nicole Scherzinger) to being knighted as much for his success on the track as his Black Lives Matter (BLM) activism off it. Hamilton – F1’s first black world champion and probably the first vegan driver and carbon emissions campaigner – practically frogmarched the racing paddock to take the knee like the Premier League to observe the BLM, and encouraged the sport to appoint a commission to make it more accessible to black people.

Since winning the World Cup with the Boks, Kolisi has used his suddenly recognisable face to establish his foundation, be hands-on with the Covid-19 relief, and co-produce an anti-Gender-Based Violence film with his wife Rachel.

It’s the kind of extracurricular calendar which has seen Kolisi’s contributions on the field get ever more negligible, but he has no real plans of changing: “When you speak about Ubuntu it means a lot to me because I was raised by the community I come from.

“Coming from that community, I used to be helped by my neighbours with everything. And now that I’m where I am, I believe I’m not here just for myself, it’s also for all the people that played a part in the person that I am.

“I always think that what happens on the field allows me to be able to do that because if I start playing badly, I become irrelevant.”

The common thread to this new “approach” by athletes is the forced contemplation Covid lockdowns imposed upon all of us. A simplistic explanation is the time spent alone has emphasised how connected they are to the rest of the free world, instead of floating in their usual bubble.