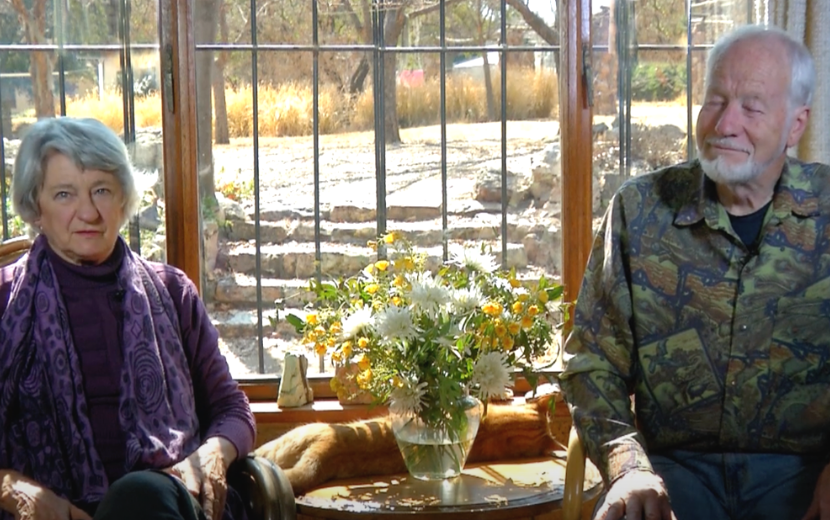 ARMOUR – Action for Responsible Management of OUR Rivers – is an organisation that was created in 2015 by a handful of concerned citizens who were alarmed to witness a major sewage spill into the Jukskei River in Johannesburg. Anthony and Helen Duigan – a couple in their late 70s – were at the vanguard of what became a mass movement to save the rivers of Gauteng. In an interview with BizNews, Anthony and Helen Duigan relayed the story of ARMOUR – which ‘didn’t start because of an intent, but started almost by accident’ – and the roots of their environmental activism. Over and above the remarkable work that ARMOUR does are the inadvertent benefits of ‘bringing real South Africans together’ and ‘creating links across the racial and class divides.’ After the interview, Helen told me the story of how, when she was just 8 years old, her grandfather asked her what the most important thing in the world was. Her answer? Water. – Nadya Swart

Helen Duigan on how ARMOUR started:

A neighbour phoned us – way down the Crocodile River – and said it was in an absolute state; it stank and the colour was awful and so forth. And [the neighbour asked] what could be done? I mean, a question like that sort of hangs in the air. We then decided on a petition and we got about 400 people down the Jukskei [River] – which runs into the Crocodile [River] – and then Anthony came up with the name ‘Action for Responsible Management of OUR Rivers’.

Anthony Duigan on how ARMOUR started:

With the petition, we sent it to about 60 odd organisations across South Africa – including the parliamentary committees, public protector, the Green Scorpions, etc. – and that elicited quite a quick response from Joburg Water, who quite magically found emergency funding to begin maintenance of Northern Works – the Northern Wastewater Treatment Works – which is what had been dumping in the river for weeks. And they began repairing these Wastewater Treatment Works.

And so, ARMOUR didn’t start because of an intent, it started almost by accident. Then, with what the result was of Johannesburg Water, we were persuaded to start a lobby group to continue the process of engaging with the city of Joburg – particularly Joburg Water – on what they could do to maintain the Wastewater Treatment Works. And that was 2015. So that was the start of ARMOUR and it grew from there.

Anthony Duigan on the response from communities:

That’s been very, very positive. And in fact, while we started in 2015, there’s been many other organisations like Hennops Revival, Fresh – which is an NGO – and others which have started and are engaged almost daily in cleaning up rivers, particularly in the Pretoria and Ekurhuleni area.

Helen Duigan on the root of their environmental activism:

It’s been sort of a whirlwind like this, starting in 1987. The government decided that they needed another large, low-cost housing establishment – it was called Norweto in those days and this included this beautiful area – for about fifty thousand houses. And all of us would just have to move. So we started an action group, but also the first Conservancy – Kareebosrand – in Gauteng, because we felt that we needed something to protect this area, which is absolutely beautiful. It’s grasslands, it’s bushveld, it’s rivers – it is really precious.

That also has been a very long road of over 30 years of countering things like gold mining – Anglo American, Glencore – all of which would have carved up this area, which we felt shouldn’t happen. And it didn’t, because the Kreebosrand Conservancy then became the Rhenosterspruit Conservancy – because it spread between the R511 – which is the road through Hennops River – and the R512 which goes past Lanseria (which is fairly close by). So, then we had this court case because Wraypex wanted to start this really fancy housing estate and that landed us in trouble.

But finally, a friend of mine – who has long since passed on – got the ball rolling to have this proclaimed as a proper nature reserve – the Crocodile River Reserve – which is now official. Whereas conservancies have no legal status.

Helen Duigan on their encounters with corporate giants:

They [Wraypex] sued us in 2005, five of us on the committee of the Rhenosterspruit Conservancy for R210m, my share was R45m. And it took five years of fighting nonstop and we won. And that was called the first SLAPP suit – strategic litigation against public participants.

There are three main areas. The first is to continue with river cleanups. Now, when we started we didn’t intend to get really involved, necessarily – with the cleanups, but we have gotten involved. And that’s because they’re burgeons. They’ve become a huge thing across the country in the last five years or so. There have always been efforts to clean up beaches, clean up rivers. But in the last five years it has now become very, very obvious – mainly because of the drive of certain individuals, not specifically in ARMOUR, but other individuals who form their own organisations. And we support them, they support us. So that’s the one thing – river cleanups, which are ongoing.

But the third side, which is where Helen has come in very strongly, is the networking through Facebook. There are about 4,600 members on her Facebook, the private ARMOUR Facebook. And that has over the years built up a lot of networks, bringing in the lone rangers – the people who are all over the country doing things but are not necessarily connected. So that networking and connecting with people has been one of the objectives of ARMOUR as well.

Anthony Duigan on the unexpected benefits of the work that ARMOUR does:

There’s a spin off in the activism that is being done. And that is that it has been creating links across the racial and class divides where people, on a weekend, get together – cleaning up dirty nappies, polystyrene and plastic out of a polluted river. Everybody is equal and everybody is forming new relationships.

So I think that is doing far more than any political movement to actually unite, build bridges, etc. And I think companies should begin to actually look at how they can also join that movement to create that platform. So I think that to me is the biggest spin off of everything. It’s not just cleaning rivers. It’s what was not initially expected; the friendships and relationships created across the divides.