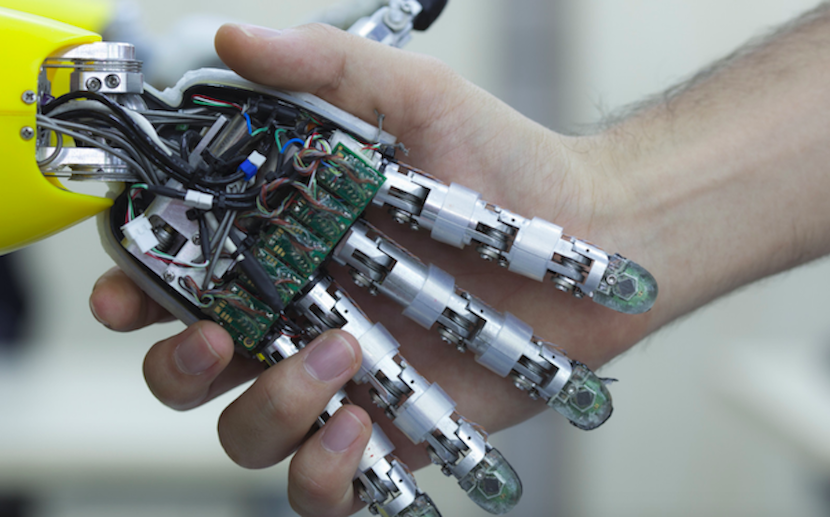 In this fascinating treatise on evolution and creativity and how each impacts differently on our environment, author Lee Blake posits that artificial intelligence, correctly used, may help slow down the extinction of species on Planet Earth. While to err is human, collective thought and endeavour can achieve magnificent results, albeit flawed. But algorithms – as we experience daily when we ‘manipulate’ a cyber device – can be used to get closer to perfection. Robotics, properly programmed, can come up with unthought-of solutions, which defy the popular narrative that creativity is a uniquely human attribute (well, yes, we do build the robots). Those creatures that fare best manipulate their environment and impact on other species; in our case, too often causing harm. Perhaps I’m a bit slow, but I chose to read this piece twice to fully absorb the value it has to offer. Enjoy. This article was first published on FirstRand Perspectives. – Chris Bateman

Creativity Series part 3: There’s an algorithm for everything

Up until now, this series has established that there has been a tendency to regard creativity as the product of individual genius whose great cognitive capacities alone are responsible for the products that they create. However, it is a vastly more comprehensive phenomenon than simply the making of things. It has specifically been discussed that environments are important, if not fundamental determinants of creation. In focusing on these determinants, we choose what is known as the outside-in perspective of creativity. From this perspective, we are not only able to liberate creativity, but realise that ideas are actually recognised, not created. We are also able to see that creativity is not only the result of an evolutionary process, but actually reflective of that very same process.

The focus of this current piece, then, will be on how creativity and evolution are, in fact, similar processes that are primarily concerned with instigating change. Both evolution and creativity not only change species and cultures, respectively, but the environment in which they operate too. The question is then: how has our unparalleled ability to change the environment put the entire globe into jeopardy? Furthermore, is our error-prone creativity (to borrow from Hegel) perhaps a poor evolutionary strategy? And, lastly, will one of our most recent ideas, namely artificial intelligence (AI), with its ability to think for us, propose a solution?

The obvious fundamental difference between creativity and evolution is that while evolution is a process that happens exclusively in the word of the matter, creativity straddles both mind and matter. On the other hand, much like creativity, evolution is a complicated beast surrounded by a veil of misconceptions and disputes. There is a popular idea, for example, that in underlying natural selection there is progress towards some absolute and perfectly balanced state. While this might be true, it is imperative to remove any implication of premeditation. Evolution, unlike creativity, has no end goal. It is a blind, trial-and-error process that happens in-the-moment.

While they may deviate significantly with regard to a driving force, each relies on an easily overlooked concept, that of diversity. Diversity is more appropriately expressed in evolutionary and cognitive theories as genetic variation and divergent thinking respectively. Where divergent thinking is the recognition of many possible solutions, genetic variation is the proliferation of many different expressions of the same gene. From genetic variation, a trial-and-error process ensues, in which those variations that demonstrate environmental fit survive and are deemed adaptations while those that don’t are extinguished.

Other than the fact that these processes take place in different domains (mind and matter), what further separates creativity from evolution is that from divergence, human thinking switches over to what is termed convergent thinking. This is essentially a process of judgement in which each possible solution is assessed and ordered according to their perceived environmental fit. Those ideas that seem most adaptable to environmental are then selected for implementation. Divergent and convergent thinking, therefore, are a sort of filter process, in which we only implement those ideas that we think will be ‘good’ or adaptable. And it is in this handover, from thinking to doing, that Hegel says we are doomed to err. This may be for a multitude of factors but is most likely because we lack sufficient brain power to consider all the factors of the environment (including things and other species), which are constantly influencing and changing each other.

Adapting the environment to the species

This last point opens a can of worms: ideas don’t always adapt to pre-existing formats, but may also adjust the environment to adapt to the idea. David Byrne addresses just this idea with the example classical composer, Richard Wagner. Wagner appears to be the individual capable of superseding his environment. Indeed, in constructing the Bayreuth Festspielhaus (Bayreuth Festival House) – which featured many musically functional adaptations, such as a larger orchestra section – Wagner separates himself from his peers. He created his own format, rather than adapting to a pre-existing one.

Wagner’s example provides us with yet a new perspective: that perhaps creativity is more versatile than we thought. It is both an inside-out as well as an outside-in phenomenon. In noticing deficiencies or limitations inherent in the environment, we are able to implement certain adjustments that might make it more conducive to our needs; create our own opportunities, as it were. This same phenomenon, as you may have already guessed, is also observed in evolution. The term ‘niche construction’ describes the process in which an organism adjusts and makes changes to their own and even others’ niches (or local environments). And, in this way, a mouse digging a burrow is as much niche construction as is Wagner building the Bayreuth Festspielhaus.

Scientists believe that species who adjust their local environment to better suit themselves, also then impact local ecosystems and, therefore, the other species that inhabit them. Extreme examples like urbanisation, deforestation, climate change and agriculture clearly illustrate that humans have, more than any other organism, had a (detrimental) impact upon the global ecosystem. Upon first glance, this looks to be a poor evolutionary strategy and perhaps it is.

However, some argue that human niche construction goes beyond evolution, in that it demonstrates purpose or direction. In other words, it is creativity in all but name. This means that human niche construction/creativity values progress (or at least some idea of it) over diversity. Whilst natural selection has, through trial and error, produced a massive diversity of species that depend on one another, human progress has tended to eliminate this diversity so as to self-select to the highest degree. The answer to why human-directed progress looks bound to fail might lie at the very beginning of this discussion with Hegel’s observation that “to act is to err”.

What is a humanity that is beyond creativity

Hegel’s claim was basically that perfection is beyond us: it exists in our imaginations, in the realm of gods and perhaps (if we are lucky) computers. While many falsely believe creativity to be beyond machines, this is simply not true. As robots begin to move out of factories and laboratories and into increasingly chaotic and unpredictable environments, they will be required to adapt to changing situations. This has actually already begun, as early as 2013 in fact. When tasked with finding a solution to moving a robot that has broken its legs, an AI’s intelligent trial-and-error algorithm produced an out-of-the-box solution in which the robot’s feet required 0% contact with the ground. Essentially, the algorithm proposed that the machine walk upside-down, on its elbows. Although awe-inspiring, the fact that AI might already be capable of creativity and adaptation is a bittersweet prospect.

With such examples abound, it is only a matter of time before what has long been considered the most human of phenomena becomes entirely automated and even perfected. This could mean that, in contrast to what scholars of human geography previously criticised, we are closing in on the perfect “combination of science and technology”, one that was previously thought to “only devastated our environment” but might now actually be the “harbinger of a utopian society.” Although humans may still be a necessary component to this progress – at least as one that provides the focus of the computation – AI offers the ability to perform brute force computations of the environment’s many complex factors.

Is a society in which our basic needs for survival are perfectly balanced against the needs of environmental sustainability possible? And would it require that we rely on machines to perform our creative tasks? This would indeed be a great price to pay, leaving future generations without a way to meet their need for recognition through engaging with the world of things. However, as things currently stand, we either lose this ability or the extinction of many more species including, potentially, our own.