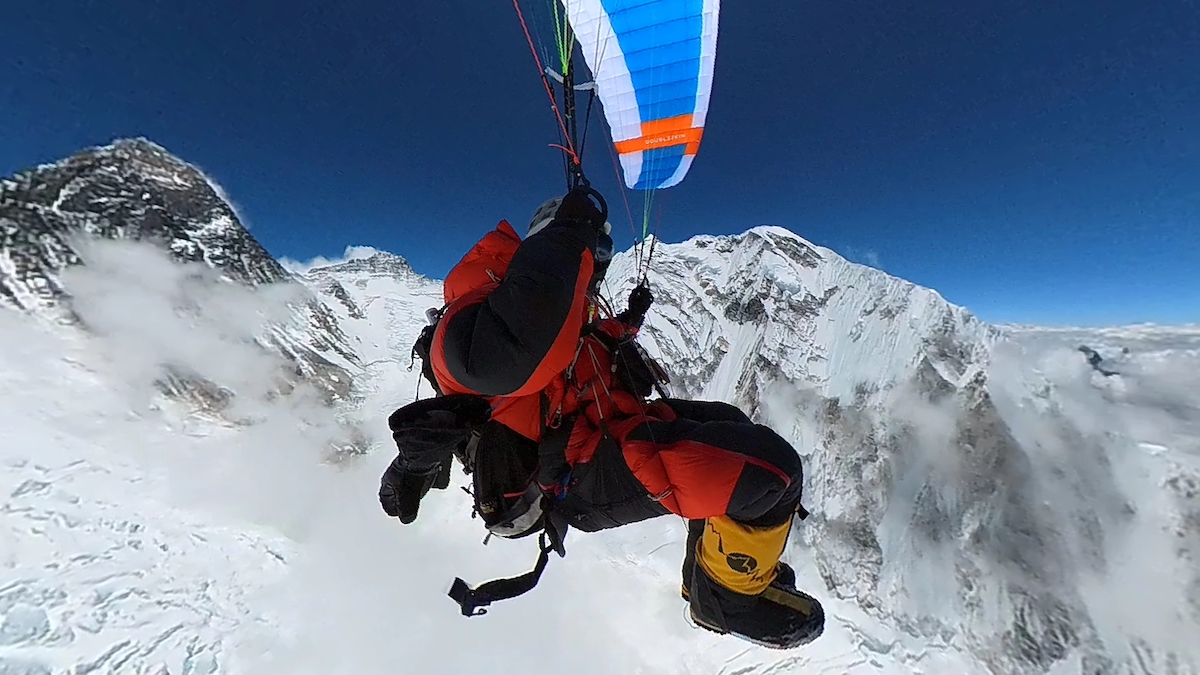 It took 55-year-old Pierre Carter just 20 minutes to fly from a point near the summit of Mount Everest before he landed near the Nepalese settlement of Gorakshep high in the Himalayan mountains. With this jump, he has opened the door, or more accurately, the skies above the peak for ‘climb and fly’ adventurers on the world’s highest mountain. It is not the only first for the adventurous South African who took a decade to become the first legal paraglider to fly off Mount Everest; he also paved the way for legal paragliders from Kilimanjaro by painstakingly seeking approvals from the Tanzanian government. Carter told BizNews how he used part of his nest egg to finance his quest and how he has the highest mountain on Antarctica in his sights as he tries to conquer all seven of the highest peaks in the world. – Linda van Tilburg

It took a decade to fly through history

It’s very hard to describe it, but it was just amazing and a dream for me. It’s come true in that I’ve been working for it, on and on for a very long time and I was really pleased that we managed to pull it off. Doing something like that, the odds are really all against you. The weather is obviously the main thing, but there’s your health and all the logistics of getting up Everest. A lot of things can go wrong that won’t even get you up the mountain, let alone fly off it. So, I was really very happy that we managed to pull it all off and it all came together at the right time.

From a flying point of view, once you are actually flying, it is all pretty relative in what the air does to the wing and the wing flies faster through the air, etc. That all works itself out, but it is the take-off to get airborne. That’s the tricky part because the air is so thin up there and your glider flies at a certain speed. To get up to speed with the air being so thin you actually have to run a lot faster and get your airspeed up to glide or take off or to start flying.

It is just beautiful and the mountains around there are just beautiful. Nepal is a very beautiful country. And the mountains are so much bigger. I have flown in the Alps, in the Andes and South America. I’ve been privileged to fly all over the world and these mountains are just on on another level. It really was very special to fly among these. These mountains have gone through history with Sir Edmund Hillary; with Tenzing Norgay with Mallory and all that controversy; it really was very special. I read those books when I was a little kid, and it was a really special moment of flying through history in a way.

Tenzing Norgay was a Sherpa who reached the summit of Mount Everest with Sir Edmund Hillary in 1953, and George Mallory is believed to have reached the summit before them in 1924 but he did not return. His body was discovered on the North side of the mountain in 1999. When he was asked why he would want to climb the highest summit in the world, Mallory famously said, “Because it’s there.”

The hardest part of the flight, getting permission and… the waiting

You end up waiting an extraordinary amount of time for your body to adjust to the altitude. So, you climb the mountain and are on the mountain for only about I think it’s five or six days when you actually do the mountain, but you wait around acclimatising for five weeks or six weeks before that. A lot of people love that. For me, it was a long time away to be away from home. I missed the dogs and the family. So, that was probably the hardest part for me, actually, out of the whole the whole trip.

I flew from 800 m below the summit, the last camp. I don’t know why. They wouldn’t give a reason why they wouldn’t let me go to the top to take off. Three other people have flown off it already; a Frenchmen back in 1988 and then he was followed by another Frenchman. The French love flying these mountains, he went in tandem in 2001, I think it was. And then there was a local Nepalese, Babu Sunuwar and he flew off in 2011, but none of them got permission. So, the government said, no, we aren’t going to allow you. They got a permit to climb it and then they few off illegally. I don’t know if any of them got fined or they managed to run away. It was a long time ago, 10 years ago for Sunuwar. He was a local and maybe just because he was a local, they let him off. The others, I am not sure what they did because I know I would have definitely been fined if I had gone off without permission.

I didn’t expect to get a permit. I went to Asian Trekking, which is the local ground operator that organises things for you. He is an avid skydiver and he had just learnt how to paraglide. He was obviously pushing to try and get it legalised to have more clients coming to fly off the mountain. In a way, now that we’ve done that, we have set a precedent. At least from 8,000 m [it is legal]. I’m sure eventually they will let people fly off the top. It is just a process you have to go through. A lot of these governments are like that. In America, in Alaska, they wouldn’t let me fly off Denali, which is the highest mountain in America and wouldn’t give a reason either. They said no and when I got there, they confiscated my gear and said I could walk up the mountain and collect the glider on the way out.

Next mountain, Mount Vinson in Antarctica

I have done Kilimanjaro, Aconcagua in South America. I’ve got a little company and we take people flying off Kilimanjaro now. It took us 10 years to get that permit and we sort of ironed the way for people to fly off Kilimanjaro. We set up the rules for the Tanzanian government and everything. And then there is Mount Elbrus in Russia, which is the highest in Europe, in the Ural Mountains, Aconcagua in South America, and obviously Everest in Asia. There is Papua New Guinea, it has Carstensz Pyramid and that is a little peak that sticks up above the jungle. Very nice little adventure that. And then there is the one in Antarctica, Mount Vinson, which is the last one I’ve still got to do.

I don’t think they’ll have an issue there from what I can gather, but it is very expensive, so I need to save up quite a bit there. It’s a good, I’d say, 20% to 30% more expensive than Everest. So, it costs and arm and a leg.

South Africa has got beautiful flying in terms of paragliding. A lot of people think paragliding is just flying off the hill and you soar down on to the beach or whatever, but you actually go far and high. South Africa used to hold the world record of 500 km in a paraglider. So, we go up to 6,000, 6,500 m out in the Karoo. The world record at the moment is over 600 km and that was set in the [United] States. South Africa has to win that back some time.

I want to do more actual mountain climbing, not just flying up a mountain. There is a new craze; it’s been around for a while but it’s becoming more mainstream now, and that is hike and fly. You take a paraglider and start, for example, at the one end of the Drakensberg – say at the Sentinel car park –and fly down to Underberg. That might take you two or three days. You fly maybe 50–60 km a day and camp somewhere on the top of the mountain and off you go again the next day. That’s turning into a big craze across the world. People are doing amazing flights, across countries and down the Alps. I’d like to do more adventurous flying like that, so back to Nepal and then flying through the mountains of Nepal in the Himalayas.

Cashing in annuities to finance a big dream

My insurance, annuities and everything when you hit 55; they paid out. So, that’s what I used. Luckily, it was quite a big nest egg. I just took some of that money and the rest went offshore for investments. I took what I needed to climb Everest.

Is this where we put in a warning? Don’t do this at home.

Rather invest it and don’t spend it like I did unless you’ve got a dream you want to fulfil. I wanted to fulfil my dream.