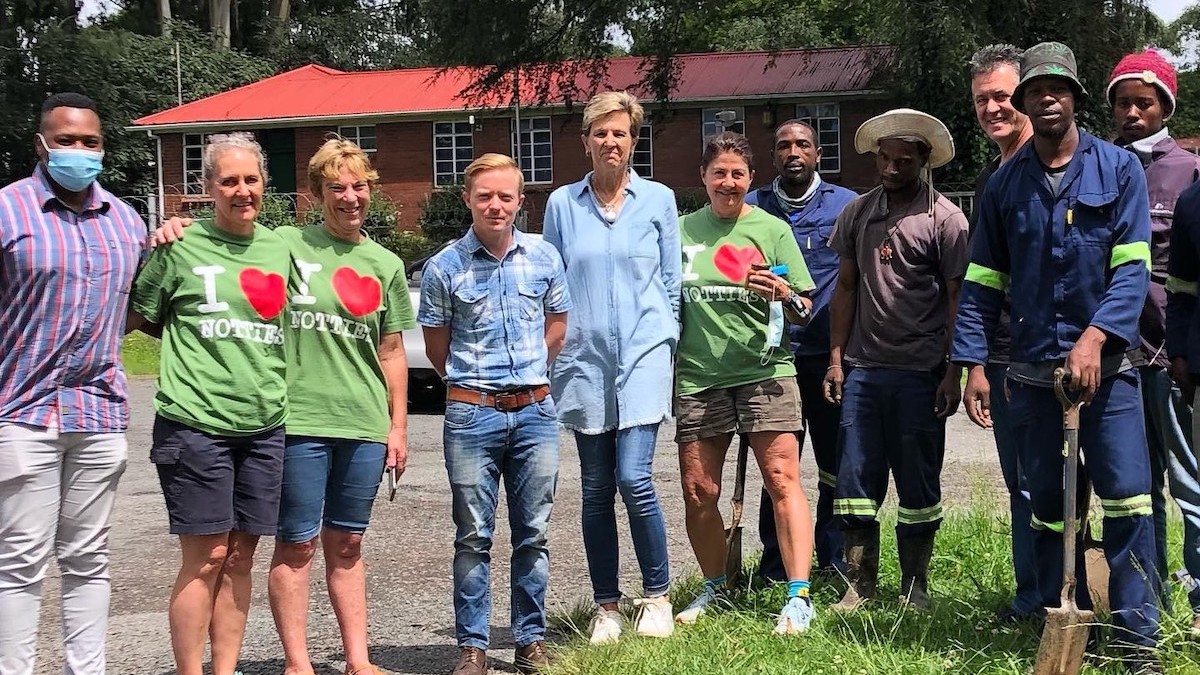 When local businesses in a small community at the foot of the Drakensberg mountains in KwaZulu-Natal called Nottingham Road realised that some members of their communities could not feed their families during lockdown, they jumped in and started a feeding scheme. But it did not stop there: it grew into a non-profit company called LOVE NOTTIES, that is involved in adult education and environmental projects while maintaining its primary humanitarian function. Missy Hughes from Love Notties told BizNews that the July riots, in which some members of their community participated, was a blow for their organisation as it resulted in some businesses withdrawing support, but they are slowly mending relations again. – Linda van Tilburg

A pandemic feeding scheme that evolved into an NGO

It started during Covid when we initiated a feeding programme. With our farming community, we were feeding about three and a half thousand people a month during hard lockdown – that was the catalyst for the organisation. We evolved from that into a humanitarian, environmental and educational functioning NGO where we focus on recycling remittances where people redeem recycling for tokens. With the tokens, they can buy food parcels or clothing from our second-hand clothing store. So that’s one of the projects that  we are involved in and it is also educating the community about environmental issues. We are also involved in all our local schools and Early Childhood Developments centres, providing food and support wherever it is needed. So, we are also involved on the humanitarian side, in human disasters where we try to coordinate relief. Basically, we are working in our local community in Nottingham Road trying to bring about transformation, change and community building.

Changing the mindset on poverty with an adult skills development programme

We also have a Dream Centre, which is an adult skills development initiative. Through that, we are creating workforce skills and changing the mindset of poverty. This is a 4-week programme, including time management, self-worth, interview skills and various critical life skills. This is a tried and tested formula initiated by Love Howick, which has developed and implemented many skills development training programmes. Love Howick have been operating for about 6 years and has mentored and supported us through their Love Cities initiatives. We believe this will be the most effective way to make a long-lasting impact in our area.

A two-pronged approach – to feed, and to prevent crime

This is mainly a rural agriculture area, but hospitality and tourism are a major industry too. A lot of those people were badly affected, and we had no support from the government. And obviously, there were also a lot of people who were not eligible for grants. So, part of our mission was just to provide basic food parcels to keep people surviving from a humanitarian aspect, and obviously a security aspect. Hunger is a major factor linked to crime, as it is a basic need. Our farmers and community were very involved with the feeding scheme, and it was a very successful team effort.

We made a difference and some are giving back

You are not always sure of what impact it will have. I will give you one example of the difference it made.  Post-Covid, when everything opened again, this man came into our second-hand store and said, ‘I just want to let you know, if it wasn’t for you ladies, my family would have starved to death.’ We did not know that at the time. It was incredibly emotional, but that was just the first immediate response that we had.

While we were feeding, we had a granny who had seven grandchildren that she was looking after and every time we dropped the food parcels, she would fall to her knees praising God and thanking us for the food. The direct impact was actually just keeping people alive and was quite profound. Now we’re moving forward in terms of job creation, skills development and support for people that are unemployed. It all makes a big difference in this community. We also had another gentleman who arrived at our shop with a big cardboard box filled with spinach. It was his gesture of giving back after receiving food parcels, for those in need. No charge, no expectations, just pure gratitude.

We have had all that; it comes full circle. We realised the difference that we’ve made and they are now supporting in giving back. Another example is a qualified carpenter who has been working in our schools. He has put up shelves in our shop, all for free. He hasn’t charged us at all in terms of a pay-back; he helps us and supports us. He is constantly giving back to the community.

We have two early child development centres that we have helped develop and we provide free food. Some of these kids have absolutely nothing. They come to school, they have no shoes on, they are literally starving. At least then they have a meal for the day and we help them with clothes. These are impoverished people that don’t have opportunities. So, that is also part of what we are doing. There was a group of local ladies called Nottingham Road Refreshed. This group got together and worked as volunteers for over 15 years, keeping the village grass trimmed, gardens tidied and on various improvement projects in the village. Love Notties has supported and now relieved them of this ongoing function. In the past, the government and the municipalities fulfilled these duties. This is not unique to Nottingham Road, and we see many towns and communities actively participating and taking pride in where they live. We are better together, and the only way is to be an active citizen.

Mending bridges after the July riots

We had massive challenges during the rioting in July 2021. It negatively impacted us because these were the communities we were working with, and some of them were the ones that were looting and rioting. It became a big obstacle for us. But we understand it was completely politically motivated; it wasn’t about us. We persevered through that, and we are slowly mending relationships again. A lot of our local communities stopped supporting us, stopped getting involved through that which was a great pity because it did a lot of unnecessary damage. Although we did have another community that stood up and declined to riot, stating that the farmers and the community had fed them during lockdown. But it’s improving, it’s improving all the time.