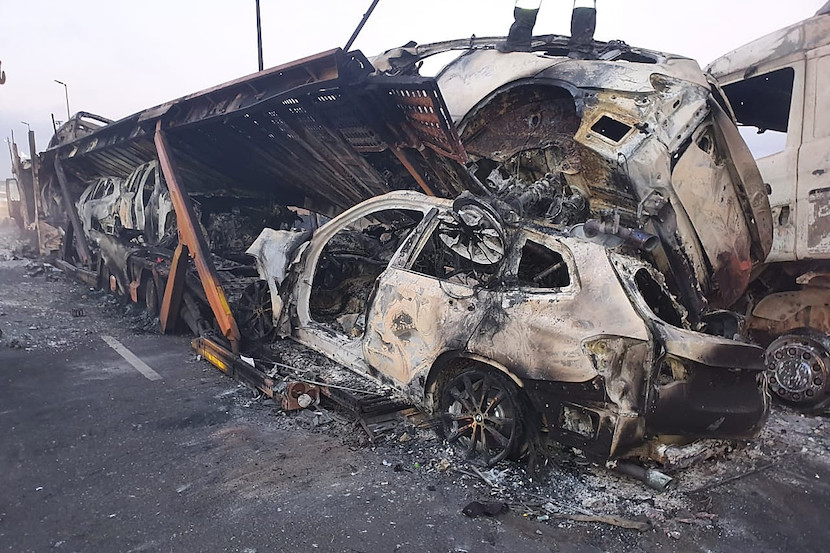 If South Africa’s roads are considered the blood vessels, then truckers and their 18-wheelers are the crimson liquid that keeps the country’s heart pumping. Without the logistics industry, life as we know it would come to a stop. Everything we do and consume has, in some way, been in the back of a lorry. Our food, clothing, electronic goods and everything else we use in our daily lives does not magically appear in window fronts and store shelves. Everything arrives in the back of a truck. When the July riots gripped KwaZulu-Natal and parts of Gauteng, chaos ensued. Looters and violent protesters took to the streets, damaging millions of rands worth of property and stealing even more. In cash alone, it is estimated that over R119m was stolen. The trucking and logistics industry was also hard hit, with FleetWatch editor Patrick O’Leary detailing the destruction. On the N2 and N3 — two crucial transport routes — burning tyres blocked the route and many truckers had no choice but to stop. “No fewer than 25 trucks and trailers were torched; one was a car carrier and several new BMW cars were destroyed by fire. The sad remnants of truck carcasses were all that remained and the tow truckers were hard at work trying to remove these remnants and open the N3 again”. In total, 250 trucks were destroyed. This article was published with permission from Fleetwatch.co.za. — Jarryd Neves, Motoring correspondent.

The opening salvo to a week of hell

It was at the Mooi River toll plaza on the evening of July 9th that the main fuse was lit for the raging flames that spread and engulfed KwaZulu-Natal and parts of Gauteng during the unrest in July following the imprisonment of former President Jacob Zuma. Yes, there had been a number of protests during the day where the N2 and N3 were blocked with burning tyres but those were mere precursors. The curtain to the main event was raised at Mooi River – and it turned into a week-long horror show of riots, burning, killing, looting, destruction, criminality and total mayhem. But it was the trucking industry that took the initial brunt writes Patrick O’Leary.

The call came in quite early on the evening of Friday, July 9th. “They’re burning trucks at Mooi River”. FleetWatch immediately started phoning our various contacts. Please let it not be a repeat of 2018. But alas, it was. At 20h45, FleetWatch posted the first warning alert on our Facebook page. It read: “Truckers avoid N3 Mooi River. Tyres burning everywhere and one truck set alight on the southbound lane near the Mooi River exit. AVOID. Keep your trucks away.” 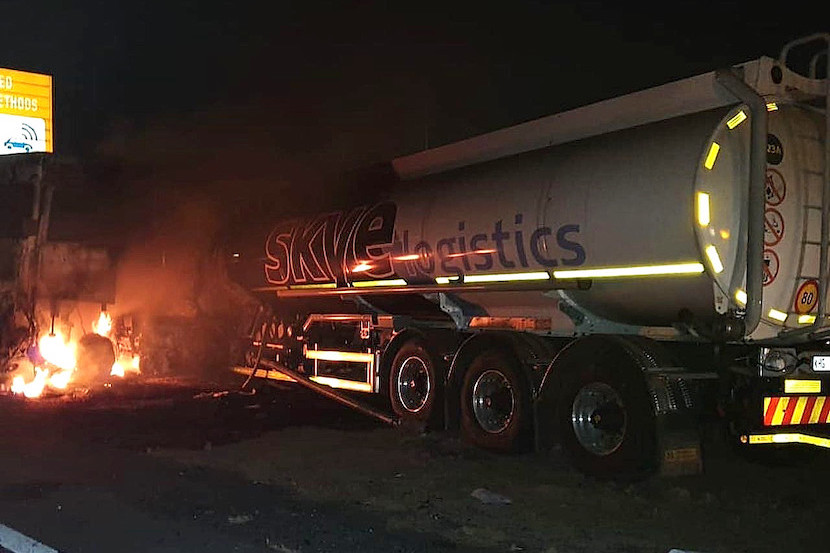 At 22h30, we put out another urgent warning which read: “This is an urgent call to all transporters whose trucks are heading towards Mooi River – either south or north bound. Get your trucks off the road. Eight trucks have now been burnt so far in the vicinity of Mooi River on the N3. There is a small police presence in the area and reinforcements are being waited for from Pietermaritzburg. Mooi River is now an EXTREMELY HIGH RISK AREA with residents from the Bruntville community alongside Mooi River looting trucks and going mad.

“Latest news received is that one of the trucks on the northbound lane is carrying methyl ethyl ketone which emits poisonous fumes when burning. This could be a huge disaster for the whole area. I have just spoken to a resident of Mooi River who lives about 1 km from the N3. He says it is like a war zone down on the N3 with huge explosions from tyres bursting rattling their windows. Just park your trucks. Don’t go further than Ladysmith or Pietermaritzburg. Get all trucks off the road.” 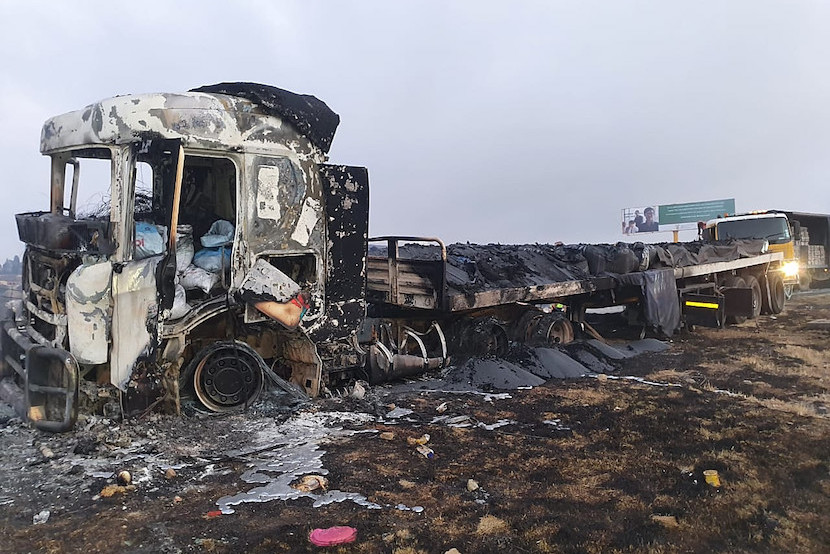 Although we were doing our best to get the message out, trucks were still arriving in the area. I picked up this message from one of the security companies in the area: “We cannot protect these trucks and if they keep coming, I am not prepared to risk my staff’s lives for people who won’t listen.”

At 23h45 I then sent out a video summing up the situation again urging all truckers to park their trucks. The video can be seen below: 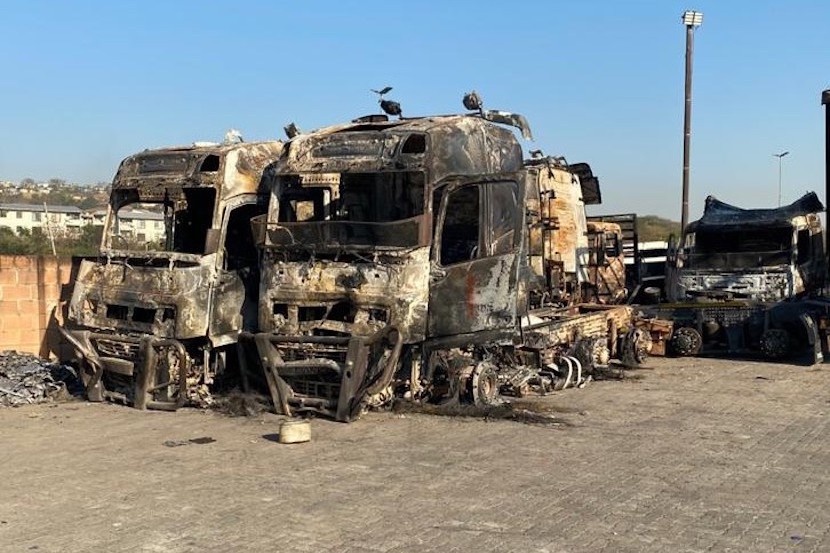 Unfortunately, the warnings did not get through to everyone with the result that come the morning, the area looked like a war-zone. No less than 25 trucks and trailers were burnt, one being a car carrier which lost a number of new BMW cars destroyed by fire. The sad remnants of truck carcasses were all that remained and the tow truckers were hard at work trying to remove the burnt ‘carcasses’ and get the N3 open again.

This was the opening salvo to a week of hell for South Africa. The accompanying videos and photographs were sourced from various social media posts as well as supplied directly to FleetWatch by people who were on the scene. The videos show the active ‘war zone’ while the photographs give readers an idea of the total destruction that resulted from the madness.

From our information sources, although the drivers were highly traumatised, no driver was killed or injured, thank goodness. However, many millions of Rands of assets — the wheels of the economy — went up in flames, destroyed in a frenzy of madness. And for what purpose?