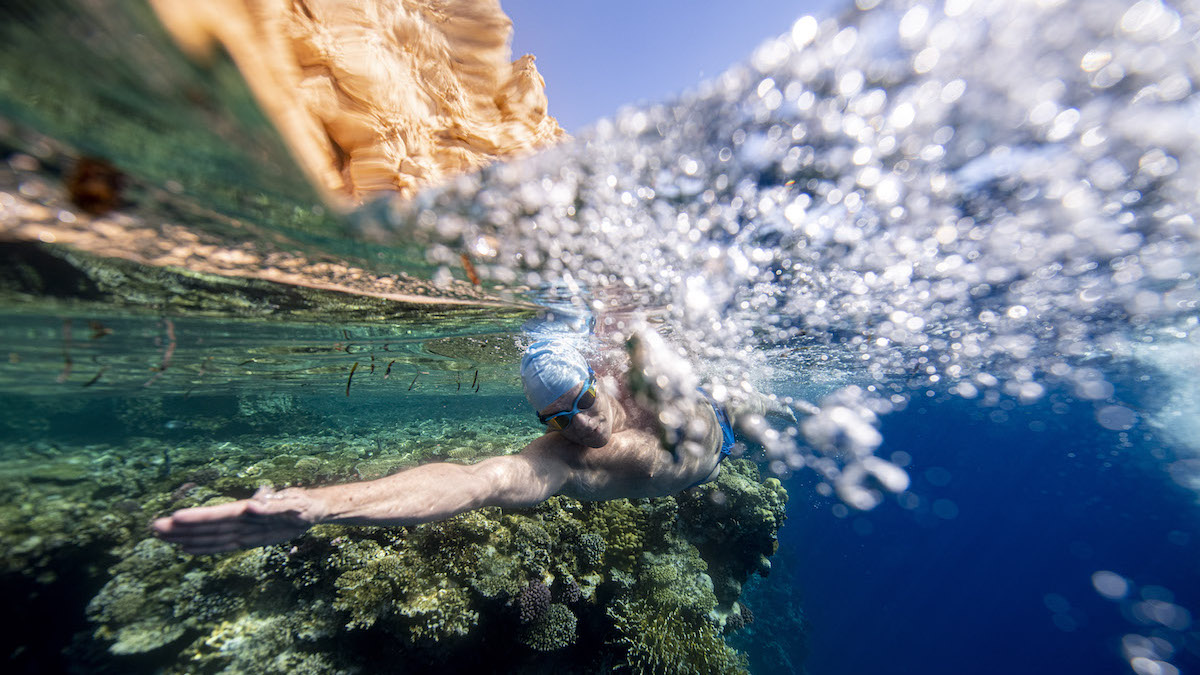 Pioneer swimmer Lewis Pugh takes on endurance swims in the most endangered parts of the world to highlight global warming. It included swims in the Arctic and Antarctic. In the run-up to COP27, the climate summit in Sharm El-Sheikh, Pugh became the first swimmer ever to cross the Red Sea, from Saudi Arabia to Egypt. He swam over some of the most precious coral in the world and invited world leaders to put their heads in the water to see what would be lost if the world continues on its track of global warming. Pugh told BizNews that the planet has warmed by 1.2 degrees Celsius, which resulted in devastating floods, wildfires and displacement. If it warms to 1.5 degrees Celsius, “We lose 70% of the world’s coral.” Pugh, who spent most of his formative years in South Africa, also speaks about the waves in the Red Sea that “twisted him like a koeksister”, the shark that appeared, how the man nicknamed ‘the Polar Bear’ doesn’t really like to swim in icy water, and about the day that he met former British Prime Minister Tony Blair… wearing a ‘sopping’ Speedo. – Linda van Tilburg

Excerpts from the interview with Lewis Pugh

Negotiations at COP have been going for 28 years; the youth are rightfully angry

Well, here’s the interesting thing. Last year’s COP was in Glasgow, COP26 was in Glasgow. I was there and I had just done this swim in Greenland and had done it across the face of the Ilulissat glacier. That glacier is now moving at a speed of 40 metres per day in summer. I then went to COP26 in Glasgow and was trying to tell world leaders about the speed of this change and how serious it is. Anyway, there were world leaders there who were making commitments for 2050 and 2060. I have members of my team who are in their early twenties. They were not around when these negotiations began. These negotiations have been going on for 28 years now, and the youth are rightfully, really upset and angry about what’s happening. And so, with COP 27 being in Sharm El-Sheikh, I had the opportunity to take them to the scene of the crime to show them what is going to be happening because the conference centre is right next to the coral reefs. My message to them was: Please come, leave the conference, walk down to the beach, put your head in the water and look at what we risk losing if we carry on heating the planet.

Every fraction of a degree matters

The science is very, very stark. The science says if we continue to heat our planet at 1.5 degrees of warming, we will lose 70% of coral reefs; at 2.0 degrees, we will lose 99% and we are currently on track for way past that. Our coral reefs are the nurseries of our oceans, a quarter of all life in our oceans live in nurseries and the idea that we could lose our coral reefs, we just cannot allow this to happen. So, I’ve been at COP27 and have been saying to world leaders that every single fraction of a degree now matters. You look at what happened in KwaZulu-Natal earlier this year. You look at what’s happened in Pakistan. A third of Pakistan was underwater. Fifty million people were displaced and that was at about 1.2 degrees Celsius of warming. These numbers matter. I just want to run through them again so people understand them. Currently, we have heated the planet by about 1.2 degrees. Every single year we see more floods, more storms, more droughts. We saw the wildfires across Europe. This is at 1.2 degrees. At 1.5 degrees, we lose 70% of the world’s coral. At two degrees, we lose 99% and we are currently on track for somewhere between 2.5 and 2.8 degrees Centigrade. It’s serious. It’s happening so quickly.

There’s no country that is doing enough

I’m not sure it is and I will tell you the reason why, because just before COP, I had just done this swim and I was on British media talking about what I’ve seen, these incredible coral reefs but how they’re all at risk and then we have a new prime minister in Britain, Rishi Sunak, and his first announcement is that he will not be going to COP. Suddenly, then for a four-day period, the media are on top of me asking me, should the prime minister be going, should the king be going? And I said to him, a number of different points. Firstly, okay, this is a defining issue of our generation. What’s happening now with the climate will impact every single person on the planet, every single future generation and the whole of the animal kingdom. For the prime minister of the United Kingdom not to want to be there is an extraordinary decision. Then I spoke about the king. I said the prime minister wasn’t even alive when the king started talking about protecting the environment. He’s incredibly knowledgeable about the environment. Egyptians wanted him to go there and yet the prime minister decided that he shouldn’t be there. I just found that a very, very odd decision as well.

There’s no country that is doing enough. So, I don’t want to single out any specific country but clearly, we’ve got an awful long way to go. As I say, we are currently on track for at least a 2.8, somewhere between 2.5 and a 2.8 degree Celsius warming and the commitments at the moment are just nowhere near the commitments to cut the carbon emissions and other emissions. The commitments are nowhere near sufficient to tackle the climate crisis. We have to get real and we’ve got to get real, really quickly.

Hammered by ‘koeksister’ waves, heat, dodging ships and … a shark

It was 123 kilometres; it was much, much more challenging than I thought. I’m known for swimming in very cold places. I swam in the Arctic, in the Antarctic to highlight the melting of the ice there. This swim was to highlight what is happening to the coral reefs. It’s the most amazing part of the world. I mean, to swim over those coral reefs was such a privilege. The views were amazing. The coral, the colours – the purples, the yellows, the reds – and then all the fish: small goldfish, big fish, parrotfish, sharks, manta rays, turtles, you name it. What an utter privilege but what made the swim so difficult was the winds. When you swim across the Red Sea, you have to swim parallel to where the winds are blowing. So, the winds are blowing north and I was swimming from the east to the west. The winds were coming and hitting me side on and you get big winds at sea, obviously big waves. And so, for a period of 10 days, it was unrelenting, wave after wave smacked me from the side. What that does, it twists your body like a koeksister. It twists it backwards and forwards, backwards and forwards and eventually it just gets really, really exhausting.

The other thing that made this swim challenging was, you have to cross a very busy shipping lane… I found myself in this most extraordinary position where I put a small little Zodiac next to me. We were in really big seas. My driver did not want to be too close to me because the waves are so big; he was worried the Zodiac would come on top of me and hurt me. I was quite far away from it. I wanted to be close to my Zodiac because underneath they have a little electronic shark shield that protects you from the sharks, but has only a four-metre radius. If I go outside of that, I’m unprotected. Anyway, you see the ships coming and it’s really difficult to judge the speed of a ship. You can see it coming. I mean, a big container ship, you will not miss it. But we were in huge seas and I think to myself, I see it coming, but I think I can get across this part of the shipping lane. So, I put my head down as fast as I can and I get past the ship and it passes behind me and I realise, Woah! There was another ship overtaking it. So, suddenly I was caught in the middle, one ship on one side, one ship on the other side. I look down and then there was a shark underneath us.

There will be more swims

First of all, some rest. My body is absolutely hammered in a way which the polar regions didn’t hammer it. It’s the twisting. So, I had a back operation a couple of years ago. It doesn’t help when your back has been twisted for 10 days. But this issue is really important. I will be at COP now for the last five days and this is where the real nitty gritty stuff happens, where people have to make compromises, have to listen to the dialogue with the other side. People have to build bridges and so I’ll be there for that. But then there will be more swims. I try to do a swim every year in a different part of the world to shine a light on these really important places, often far away from us, but which will have an enormous impact on our futures.

Swimming in the Thames in London, an angry harbour master and that meeting with Tony Blair

I did a swim down the River Thames and the Thames is tidal, so when I got to Teddington, which is where it becomes tidal, the harbour master of the port of London said to me, “You cannot swim in this section. It’s too dangerous. Ships will avoid you.” Every harbour master thinks their harbour is the busiest in the world and he said, “It’s far too dangerous. There are currents and tides and shipping and etc., etc. I said, “ Given where I swam in the world, to suggest that swimming in the Thames is the most dangerous place, you know, you’re going to have to do better than that…

Anyway, I swam there, I put on some clothes and I walked to Number Ten but I didn’t have time. There were so many crowds around me, I didn’t have time to dry off. So, if you look at the photographs, I have these wet khaki trousers and my Speedo is sopping underneath.