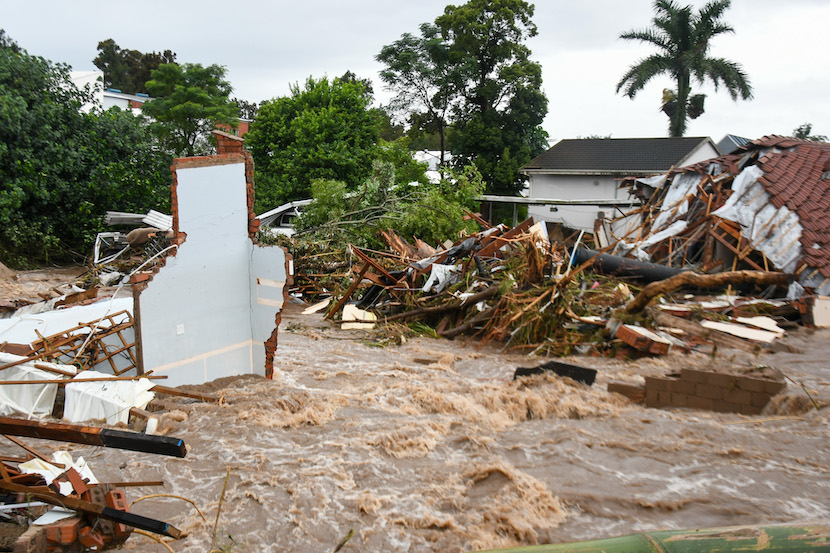 President Cyril Ramaphosa blamed climate change for the recent floods in KwaZulu-Natal that have killed more than 400 people in the province. “This disaster,” he said while inspecting the damage, “is part of climate change. It is telling us that climate change is serious, it is here.” He added that he believed devastating floods happen only in other countries like Mozambique or Zimbabwe. But as many journalists who have covered floods in KZN in the past decades can attest, these events do not only occur in our neighbouring countries; they have often devastated KwaZulu-Natal. I was a young journalist when Domoina, a severe tropical storm landed in Durban in 1984; and I was in an Airforce helicopter when it rescued people from trees, not only in Mozambique, but also near Pongola, KZN. That was described as the worst flood in 100 years. Yet again, in 2017, another flood hit Mozambique and the northern parts of KZN and, on that occasion, the South African Airforce rescued a woman who had just given birth in a tree. Dr Duncan du Bois from the Bluff in Durban goes back further and writes that history has shown that 400 mm of rain recorded in that city last week, was not an aberration, “and therefore cannot be ascribed to global warming as a result of fossil fuels”. – Linda van Tilburg

While the full extent of the loss of life and property and the damage to infrastructure from the floods that occurred last week will be finalised in due course, such flooding in KZN is not exceptional.

Twice in the past, floods have occurred in April. The first recorded occasion was in April 1848. Between 13 and 15 April 1856, the Natal coast received 650 mm of rain according to reports in the Natal Mercury of 18 and 25 April 1856. Whereas previously the Mgeni River meandered into the Indian Ocean to the south of its present entry point, the volume of water caused it to straighten its course demolishing everything in the Springfield Flat.

The Isipingo Flat suffered a similar fate and was described as having become a lake. Pioneer settler Dick King, using an improvised raft, rescued his neighbour, Thomas Smart and his family from the roof of their house where they had been marooned for two days. Crop, livestock and machinery losses were estimated at £30,000.

Late in August 1868, a gale-force south-westerly dumped 255 mm of rain in a single day, which swept away the new Queen’s Bridge across the Mgeni altogether causing an estimated £100,000 worth of damage in the colony. The 585-ton vessel Ambleside, bound for Liverpool with a cargo of wool and cotton was blown ashore and ran aground in the mouth of the Mzimkulu River on 19 August 1868.

Heavy rainfall occurred in September 1893. In July 1917, 262 mm of rain fell in a 36-hour period. Excessive flooding occurred in May 1959 when several bridges were washed away after 280 mm of rain had fallen. Heavy rains in March 1976 resulted in uprooted trees and foliage piling up on the beaches. Cyclone Demoina savaged the province in February 1984. September 1987 saw a repeat of the 1959 flooding, memorably sweeping away the new John Ross Bridge over the Tugela River.

But the most devastating weather extreme began on the afternoon of 31 May 1905 when the coast was lashed by torrential rain and hail, which spread rapidly across the whole of Natal resulting in widespread snowfalls as far as Dundee. The Midlands were snowbound and stock losses running into the thousands were reported.

As experienced last week, heavy rain in 1905 caused massive flood damage. Botanic Gardens recorded 287 mm in a 13-hour period. The 398 mm in the Pinetown area in just 15 hours breached the reservoir and sent a wall of water thundering down the already swollen Mhlatuzana and Umbilo river valleys, sweeping away Indian residences. Some 200 people were reported to have drowned. The Umdloti river swept 30 people to their deaths along with 50 others in the Redcliffe Valley.

Near Phoenix, a locomotive plunged down an embankment as a result of a washaway. In Durban Bay, the dredger Sandpiper sank while small craft were reduced to matchwood by the gale. Durban residents experienced a waterless weekend as a result of burst water mains. Without water for the boilers to produce steam to drive the turbines at the power station, no electricity could be generated.

Ferries and launches on the Mzimkulu were sunk after 216 mm of rain had converted the river into a raging torrent.  With rail traffic on the South Coast unable to proceed beyond Isipingo, for several days Port Shepstone’s only contact with the outside world was via the post cart from Harding.

For nearly two weeks, reports of widespread damage and disaster were featured in The Mercury. So extensive was the loss of life and property that it elicited messages of condolence from, inter alia, King Edward VII, the Viceroy of India and the Cape Parliament.

As KZN’s history shows, weather extremes are a natural occurrence. The rainfall in excess of 400 mm recorded in Durban last week was not an aberration and therefore cannot be ascribed to global warming as a result of fossil fuels.