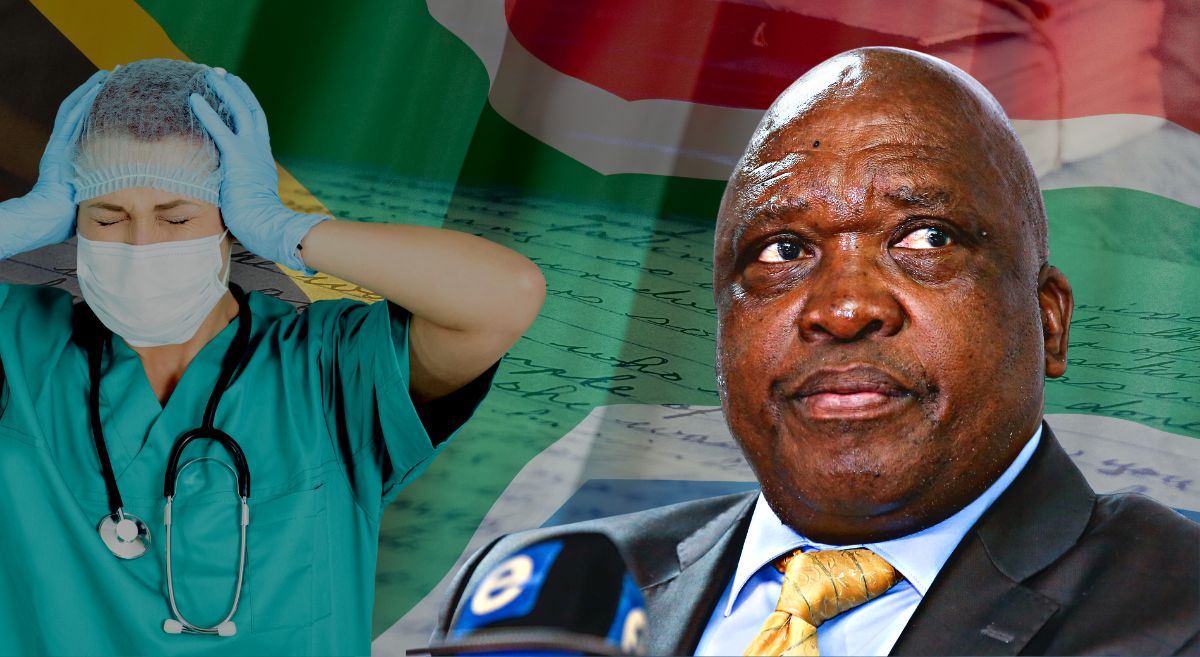 According to Med Brief Africa, more than 140 of the country’s top healthcare leaders, including clinicians in both the public and private health sector, academics, scientists and health experts have written to Health Minister Dr Joe Phaahla and Gauteng Premier David Makhura demanding that the deteriorating conditions in public hospitals are addressed immediately. They are standing together against the victimisation and intimidation of health personnel who speak out publicly on deficiencies. In the open letter, the group – calling their cause the ‘I Am’ movement – states that the stifling of rightful dissent and public disclosure is “reminiscent of Apartheid-era practices”. To underpin their seriousness, individuals in the group identified themselves. The emergence of the ‘I Am’ group indicates a welcome shift in the SA health system. This article first appeared in MedicalBrief. – Nadya Swart

Health professionals unite in ‘I Am’ movement against state victimisation

A 130-strong group of senior, highly-regarded health professionals have come together to publicly highlight the deteriorating conditions at state health institutions and stand united against victimisation and intimidation of those who raise such matters.

In what the Daily Maverick describes as an “unprecedented” move, the health professionals, calling their cause the ‘I Am’ movement, have written an open letter to the Minister of Health and the Gauteng premier.

They include senior academics, senior specialists of major public hospitals and heads of department, a former director-general, deputy director-general, deans of university health faculties, former heads of provincial health departments, the chair and CEO of the South African Health Products Regulatory Authority, the president of the Medical Research Council and the CEO of the Board of Healthcare Funders.

Each person signs “I am” followed by their name, as a direct challenge to authorities to discipline them if they dare. The letter is written in solidarity with Dr Tim De Maayer, whose own open letter about the dire conditions at Rahima Moosa Mother & Child Hospital earned him the support of many – and a suspension from work. The resulting outcry saw him being reinstated, but there were reports of ongoing victimisation at work, which provoked another groundswell of support.

MedicalBrief reports that UKZN law professor David McQuoid-Mason also weighed in on the matter in an article titled, “Is there a legal and ethical duty on public sector doctors

whose complaints to hospital administrators have been ignored to inform the public about harm to child patients due to intentional maladministration, negligence or indifference at the local and provincial level?” in the South African Medical Journal.

McQuoid-Mason concludes that De Maayer has acted in accordance with the Constitution, the National Health Act, the Children’s Act, the Health Professions Act and the Rules and Guidelines of the HPCSA.

However, he writes that it appears that the official functionaries seeking to discipline him have violated the rights of the child patients in the Constitution and relevant legislation. “As the complaints about the untenable conditions in the hospital were raised three times with the official functionaries concerned, and ignored by them, he was more than justified in trying to take other measures to protect the child patients.  In the circumstances, it seems perfectly reasonable to hope that by bringing the conditions at the hospital to the attention of the media, the public reaction might result in pressure on the administrators to address the situation.”

He says the officials concerned should be disciplined. “If they are registered with the HPCSA, they should be reported and disciplined for violating the Council’s Ethical Rules of Conduct and General Ethical Guidelines for healthcare practitioners.”

The ‘I Am’ movement, meanwhile, arose spontaneously in recent days, the Daily Maverick report continues. It points to a shift in power in the health system, with those on the frontlines now more determined than ever to speak out about the appalling conditions under which they work – conditions patients are forced to endure.

A Spotlight editorial by editor Marcus Louw says while government claims to value health workers, much government action in recent years suggests the opposite. Louw says the much-publicised De Maayer case is similar to the one faced by Professor Ebrahim Variava at the Klerksdorp Tshepong Hospital in 2020. “In 2014 community healthcare workers in the Free State were arrested and convicted, essentially for attending a peaceful protest – their convictions were eventually overturned in 2016 after a lengthy court battle.” De Maayer, Variava, and the community healthcare workers in the Free State had widespread support and their cases were prominently covered in the media. Spare a thought for health workers who do not have these levels of support.

What these cases show is that, despite how much health workers are supposedly valued, they are often not valued as highly as the people – often cadres or cronies – appointed to manage them.

One could understand healthcare workers in the province feeling abandoned by government. As the crisis built over the last year, the state was essentially paralysed because of the rank incompetence in the Gauteng Department of Health and Department of Infrastructure Development. Those in power may at some level have wanted to support healthcare workers, but not if it meant taking on entrenched patronage networks.

Third, consider the appointment last year of Dr David Motau as registrar of the Health Professions Council (HPCSA) – the body responsible for the registration of healthcare workers in South Africa. Mere weeks after Motau’s appointment, he was suspended after appearing in court in relation to allegedly fraudulent payments relating to his time as head of the Free State Department of Health. The suspension was lifted and then reinstated. It is a messy course of events that could and should have been anticipated.

We are mentioning Motau here since the HPCSA is a particularly important entity for healthcare workers, but similar arguments can be made about the appointment of various heads of health departments or other senior health leaders. With few exceptions, even now in 2022, there appears to be a remarkable lack of seriousness when appointing people to key leadership positions in our health system.

The above is of course not the whole picture. Some provincial health departments are better run than others. Some hospital CEOs and district managers are doing remarkable work under difficult conditions. Even so, the problems are varied enough and widespread enough to suggest that there are systemic issues underpinning the state’s neglect of healthcare workers.

Government’s failure to provide sufficient management and administrative support to healthcare workers is one aspect of the problem. Another aspect is the disregard for healthcare workers in some policy-making and legal reform processes. Positive exceptions, such as the relatively inclusive way in which government develops its tuberculosis policies, are just that – exceptions.

This sense that healthcare workers are not being heard is also apparent in the way in which the discourse and law-making process around NHI  have unfolded. Despite various submissions and concerns raised by groups representing healthcare workers, the ANC MPs who dominate the Health Committee seem hardly to have wavered from the course they set more than two years ago.

Ultimately then, the deplorable treatment suffered by Dr de Maayer is not an isolated incident but forms part of a broader pattern whereby politics and patronage routinely trump government’s commitment to healthcare workers – be it in policy-making, at specific health facilities, in provincial departments, at the HPCSA,  or in parliament. As long as those in power fail to face up to the seriousness of this diagnosis, whatever cures they propose for the dysfunction in our healthcare system will not get us very far.

In the open letter, the I Am group says: “We, health professionals and healthcare workers, academics, medical scientists and researchers, veteran healthcare activists and representatives of civil society concerned with and about the condition of public healthcare services hereby declare that:

The irrefutable deterioration of the public healthcare service, the principal agency that underpins the constitutional entitlement of access to all necessary care, is a gross violation of the rights of all who live in South Africa and is an unconscionable assault on the well-being of patients attending public health facilities.

Conditions of service that prohibit health personnel from speaking publicly on these deficiencies are reminiscent of apartheid-era practices to stifle rightful dissent and public disclosure and are contrary to the constitutional order.

We, therefore, demand the following:

The immediate and unequivocal cessation of all disciplinary action against Dr Tim De Maayer and his colleagues, and the institution of an independent inquiry into the related conduct of the relevant provincial officials and the CEO of the Rahima Moosa Mother & Child Hospital.

The establishment of a standing Public Health Administration Review Commission to reconfigure the structure and operation of provincial health departments, including: a) The devolution of authority to independent, skilled and capable hospital boards accountable in the first instance to the facility and its staff, patients and communities and reporting to the Provincial Legislature on a regulated basis. b) The appointment of CEOs with operational and financial management skills by these duly constituted boards, in conjunction with the joint staff protocols of relevant academic medical faculties and the provincial administration.

We wish it to be known that we will actively oppose victimisation of healthcare workers and do all we can to protect their right to expose administrative actions that negatively affect their ability to comply with their ethical responsibilities.

For the removal of any doubt, the list of signatories to this letter should provide you with confidence that the matters canvassed in this letter should be taken up as a matter of great urgency, because every minute longer that this untenable situation obtains may be measured in lives lost.

The DA has also called for an urgent investigation into the conduct of the CEO of the Rahima Moosa Mother & Child Hospital, Dr Nozuko Mkabayi, in the case of De Maayer, and her poor management of the hospital. It also said conditions needed to be improved drastically so that mothers and children received decent care at the institution.

This follows the news of a warning letter will be handed to whistle-blowing paediatrician De Maayer, who exposed the appalling state of the facility, said Gauteng DA spokesperson on health Jack Bloom.

Bloom said De Maayer was also asked to apologise to Mkabayi, and that it was “extremely disappointing Dr De Maayer has been informed he will be served with a warning letter that colleagues fear may lead to his dismissal,” reports News24.

Last week (15 June) MedicalBrief reported that the Human Rights Commission had stepped in, visiting the hospital and acknowledging its deficiencies. It said the hospital should be reclassified as a tertiary institution. This, said the HRC, would allow for a bigger budget and help alleviate some of the issues, as the current budget was completely inadequate for the facility.

Gauteng Health said the management team at the hospital had agreed to work together to continue to address the issues. But Bloom said staff complained that Mkabayi has not tackled their concerns and spends “too much time working from home,” instead of being there full-time.

“Staff appointments are allegedly delayed because documents have to be taken to her house for sign off and she has also been slow to fix the CT scanner, so patients have to be sent to other hospitals for scans.”