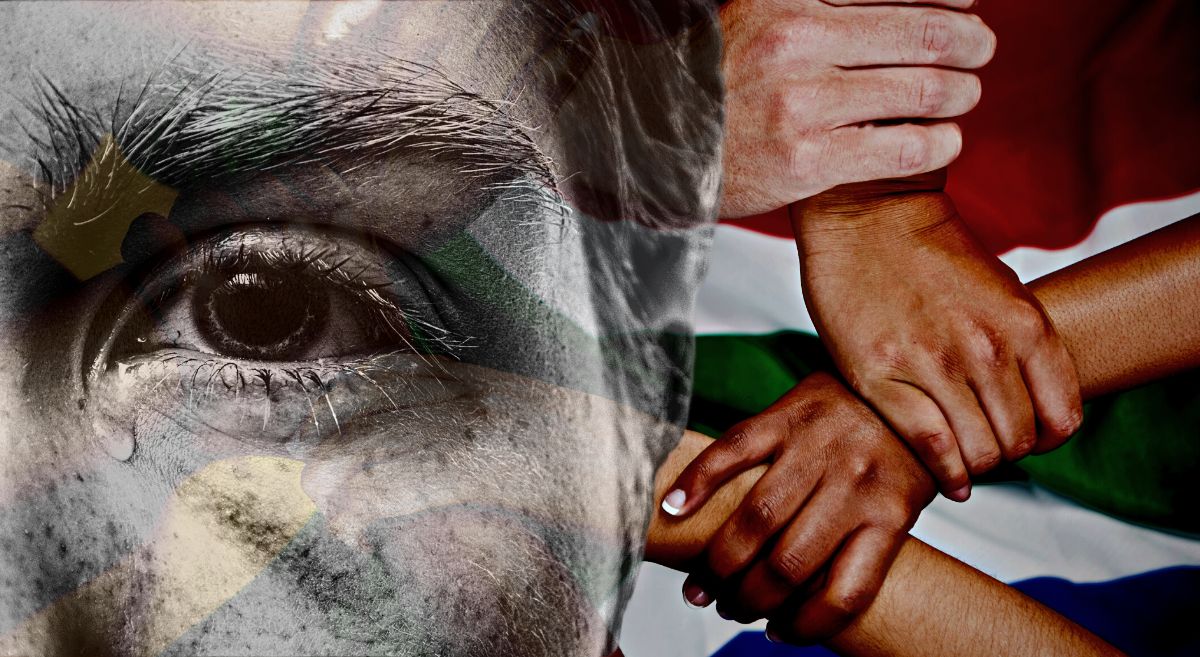 According to the World Population Review, South Africa is ranked third on the list of countries with the ten highest global crime rates. We lag behind only Venezuela and Papua New Guinea. South Africa has a notably high rate of assaults, rape, homicide and other violent crimes that have been attributed to several factors, including high levels of poverty, inequality, unemployment and the normalisation of violence. Keep in mind that these are only the reported crimes, so the actual statistics in South Africa are likely much, much higher. Nicholas Lorimer posits a plausible, while tragic, theory that the divisions in South African society are countered by the reality that the ubiquitous trauma that we’ve all experienced to one degree or another unites us. This article first appeared on the Daily Friend. – Nadya Swart

It’s a lazy cliché that South Africa is a divided society, when in reality there are many things that unite us. Unfortunately, some of the most powerful experiences all South Africans share are of trauma rather than triumph.

South Africans of every class, race and belief have experienced crime, and the effects of defective government. Of these, crime is by far the most impactful on our psyche.

For decades now the incredible violence of South African society has been clear both in the data and in the anecdotal evidence. Since the 90s, South Africa has routinely ranked in the top ten countries in the world for murder, rape, assault and theft, usually only being surpassed by gang-ridden countries of Central and South America such as Venezuela and Honduras.

It’s unlikely, of course, that this would come as a surprise to a single South African. This is reflected in IRR opinion polling showing that crime, safety and women and child abuse are often right behind unemployment as some of the most serious problems that have remained unsolved since 1994.

Every single day I am struck by the incredible stories of violence and crime which fill the news pages. I am also struck by how numb I and so many around me have become to these same stories. Crime is so pervasive that almost everyone, from the poorest black shack dweller to the coloured teacher at a state school, the Indian accountant and the white Sandton socialite has either directly experienced serious crime or has a close family member or friend who has.

The strange effect of our persistent high crime is a sense of shared trauma that unites all South Africans. While almost certainly not universally true, this shared trauma is often the stimulus behind South Africans working together, and risking their own lives or property, to act against crime.

I have encountered many examples of this phenomenon, in the media and in my own life, too: white suburbanites charging out of their homes to defend a young black woman from an assailant in the street; an old black man in a bakkie trying to drive away a phone snatcher wrestling my father for his phone; middle class communities banding together to pay for street patrols; farm communities banding together to catch murderers; and angry residents of every race joining forces to nab phone snatchers outside restaurants in Melville, Johannesburg.

South Africans are in many ways like the people in the classic ‘80s film Death Wish 3: while the film is mostly silly, it quite nicely captures the way in which communities constantly traumatised by crime unite in their pure hatred for criminals, who in the film are only ever referred to as ‘creeps’.

South Africans, much like the people in the film, also often revel in any violence that is used to ‘strike back’ against the criminals who menace them. Many South Africans respond to the failure of the police to contain crime by resorting to vigilante killings, with hundreds officially recorded every year, the real number likely being as high as a thousand. While many of these killings are carried out in poorer areas, whispered stories in the leafy suburbs tell of suburban vigilante killings from time to time.

When not taking the law into their own hands, many South Africans support ever harsher laws to crack down on crime. While opinion polling is not regular on the reinstatement of the death penalty, majorities seem to be in support of the idea. Some public figures have even argued for the abolition of bail and the castration of rapists. Comments sections, social media and casual conversations often reveal delight in the death of criminals, and calls to stop giving criminals ‘so many rights’ (a sentiment the ANC has picked up on from time to time, with police ministers in the past having called for officers to ‘shoot to kill’ and to ‘crush the balls of criminals’. Even former President Zuma once remarked that he thought criminals had far too many rights (he would know).

For at least a decade, however, the ANC government has been afflicted by a kind of policy inertia – unless the policy is moving in the direction of more cadre deployment, race law or weaker property rights – and, considering the ANC’s electoral dominance, many South Africans have given up viewing changing the law as a possibility or something that can seriously be achieved. Calls for harsher treatment of criminals have tended to be more an expression of moral outrage rather than anything like a serious effort to adjust policy.

But this era of politics seems to be coming to an end, with the ANC looking ever more likely to lose its majority in 2024 or 2029 and possibly being removed from government altogether.

When the spell of ANC dominance is broken it will ignite the imaginations of every advocacy group and ideologue in the country, and renewed and more serious calls for harsher punishments, abolition of bail and abuse of the accused will likely become serious legislative propositions. The shared trauma of South Africans will make these calls very popular across race and class.

Yet, in fact, South Africa’s crime problem is in many ways due to problems of implementation rather than because we ‘treat criminals too nicely’. A more efficient, enthusiastic and better-trained police force, freed from cadres and held to high standards would do far more to combat rampant crime than would abolishing bail.

Any future coalition government will need to tread carefully to avoid the populist temptation to remove key aspects of our fundamental rights, while at the same time being seen to be effective and tough on crime without any sympathy for criminals.

If there is one thing that will kill a post-ANC government faster than you can sing the national anthem, it will be ignoring our great national trauma.