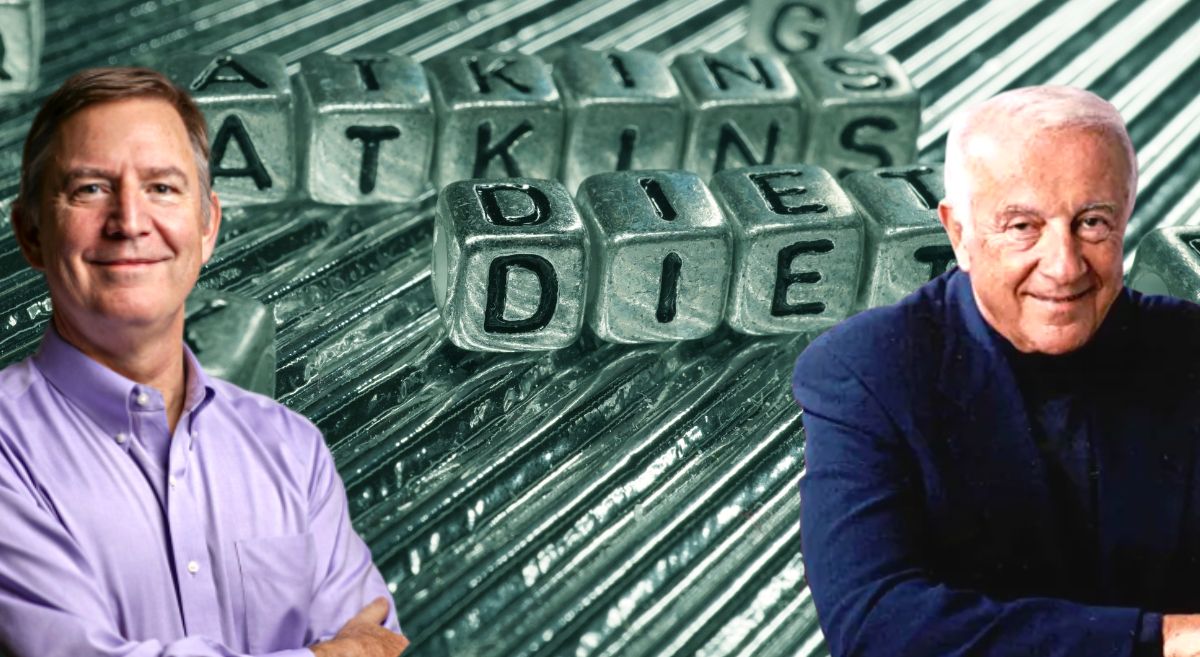 In Part 3 of the esteemed Professor Tim Noakes’ series on insulin resistance, Noakes tells a genuinely compelling story about the heavyweights that assisted in establishing the foundation and credibility of the low carbohydrate, high fat (LCHF) diet. One of these is Dr Robert Atkins, whose deep depression after President John F Kennedy was assassinated in 1963 was the catalyst for an overweight Atkins to decide that it was time to save his own life and immediately find a way to begin his recovery. Noakes also relays the journey undergone by Dr Eric Westman, a physician practising at Duke University Medical Centre. Westman, initially sceptical of the Atkins diet, was transformed by his observation of its success in his patients and, after a visit from Atkins, he was convinced of the safety of the Atkins diet and its ability to successfully treat obesity and Type 2 diabetes. BizNews had a hugely informative interview with Dr Westman earlier this month. – Nadya Swart

Figure 1: Changes in glycated hemoglobin (HbA1c) concentrations in 21 patients with T2DM who ate a low-carbohydrate diet for 16 weeks. HbA1c concentrations are a measure of the average 24-hour blood glucose concentrations over the previous three months. Values greater than 6.5% are considered diagnostic of T2DM. According to this measurement, 14 of 21 (67%) patients put their T2DM into “remission” on this eating plan. Reproduced from reference 42.

Since an HbA1c below 6.5% is considered to be the upper end of the “normal” range, perhaps this is the first study in the modern literature showing “remission” or “reversal” of T2DM while using nothing more than a dietary intervention. Importantly, there is no single report in the medical literature documenting T2DM “remission” or “reversal” while following usual medical care including the prescription of insulin or other medications.

For historical completeness, it’s appropriate to mention that Leslie Newburg and colleagues at the University of Michigan began to use a high-fat, low-carbohydrate diet to treat T2DM in the 1920s (43-49). It seems probable that among the 73 patients they reported in their first paper (43), some may have gone into “remission” on the high-fat diet. Indeed, their second paper (44) shows a number of patients whose random blood glucose concentrations fall below 5.5 mmol/L (0.10%), as does their third paper (45). The authors also argued that mortality in the group treated with this diet was no worse and might even have been slightly better than that for similar patients treated with the low-fat, low-calorie diet then promoted at the Joslin clinic.

In 1973, J.R. Wall and colleagues also reported the use of a carbohydrate-restricted diet produced “good diabetic control on diet alone, in two-thirds of cases by the time of the second visit — that is, within 2 to 3 weeks” (51, p. 578). The authors’ main focus was not on “reversal” of T2DM. Rather, they wished to determine whether weight loss or carbohydrate restriction was the key to successful management of T2DM. They concluded that “control of diabetes in obese patients who respond to diet alone is due to carbohydrate restriction rather than to weight loss” (p. 578).

These studies show that already in the 1920s, there were those who argued that a carbohydrate-restricted diet is beneficial for the management of T2DM.

Westman and his colleagues establish this as fact, and their study shows that on a carbohydrate-restricted diet, some T2DM patients do not require medications to maintain good glucose control (42).

It takes another 13 years for a larger study to confirm these findings and bring the value of the low-carbohydrate diet for the management of T2DM to a much wider audience.

THE STUDIES OF STEVEN PHINNEY AND JEFF VOLEK

Drs. Jeff Volek, Ph.D., and Stephen Phinney, MD, are two other scientists whose research was funded by the Atkins Foundation. They undertake a number of studies of low-carbohydrate diets in different populations, ultimately focusing on changes in blood lipid profiles in those with metabolic syndrome (52-58).

Some of the most important findings from these studies are shown in Figure 2.

Figure 2: Changes in metabolic and other health markers in person with metabolic syndrome, randomized to either a high-carbohydrate (56%), low-fat (24%) diet or a high-fat (59%), low-carbohydrate (12%) diet. Both diets were hypocaloric (~1,500 cal/day). Note that all variables show greater improvement on the low-carbohydrate diet than the low-fat diet. Data from reference 54.

The evidence clearly shows that all variables improve to a greater extent on the low-carbohydrate diet. The greatest reductions are in blood triglyceride, insulin, and saturated fatty acid concentrations, with a marked increase in blood HDL-cholesterol concentrations as well.

Restriction in dietary carbohydrate, even in the presence of high saturated fatty acids, decreases the availability of ligands (glucose, fructose, and insulin) that activate lipogenic and inhibit fatty oxidation pathways. The relative importance of each transcriptional pathway is unclear, but the end result — increased fat oxidation, decreased lipogenesis, and decreased secretion of very low-density lipoprotein — is a highly reliable outcome of a low-carbohydrate diet. (55, p. 309)

In their most recent study, Phinney and Volek find that these benefits can occur rapidly and are not dependent on weight loss (58). There, they conclude: “Overall, this work highlights the importance of the dietary carbohydrate-to-fat ratio as a control element in Metabolic Syndrome expression and points to low carbohydrate diets as being uniquely therapeutic independent of traditional concerns about dietary total and saturated fat intakes … . Based on these results, any long-term trials in participants with Metabolic Syndrome should include low carbohydrate diets” (p. 11).

Phinney and Volek’s studies confirm and extend Reaven’s findings from between 1987 and 1994 (59), and address the impact of low-carbohydrate diets on the metabolic profile and other health markers of persons with the metabolic syndrome.

Logically, Reaven’s group should have completed and published studies identical to these already by the turn of the last century. Why they did not is a mystery I will explain subsequently.

Certain that the low-carbohydrate diet could correct the metabolic syndrome (55) and might even “reverse” T2DM in some individuals (41), some time around 2014, Phinney has the opportunity to speak to recently retired Sami Inkinen, who was planning to row across the Pacific from San Francisco to Honolulu on a carbohydrate-free diet (60, 61). Phinney, together with Jeff Volek, wishes to repeat the Westman study (41) in a larger group. But Phinney and Volek need help, so they ask Inkinen if he would be interested.

Inkinen agrees on one condition: that the study becomes part of a startup tech company, the ultimate goal of which is to “reverse diabetes in 100 million persons by the year 2025.” And thus, the Virta Health company is founded.

By 2016, the new company has recruited 262 persons with T2DM for a five-year study using a novel model of remote care that focuses on the prescription of a ketogenic, low-carbohydrate diet with regular feedback using relevant biometric measurements of food intake, and blood glucose and insulin concentrations.

In early 2017, the results of the first 10 weeks of the intervention are published (62). They show that the ketogenic diet reduces blood HbA1c by 1% (compare with Figure 1), even though 57% of subjects have either reduced or terminated their use of diabetic medications; 56% of subjects have reduced HbA1c values to below 6.5%, the value traditionally used for a diagnosis of T2DM.

*Editor’s Note: As noted on CrossFit.com on May 14, 2019, the trial to which Prof. Noakes refers “was funded and run by Virta Health, a private company that sells the app used in the trial to privately insured employers; as such, the trial involves a conflict of interest similar to a pharma-funded drug trial. Additionally, the 262 subjects all chose to opt into the Virta program and were neither randomized nor blinded. Despite these issues, the significance of this trial can hardly be overstated. This trial represents the first clear, long-term evidence in a large population that a ketogenic diet, when followed properly, can lead to significant improvements in health among Type 2 diabetics, and in many cases (in this trial, the majority) even resolves diabetes completely.”

A separate paper compared changes in cardiovascular disease risk factors in the same populations (64). With one exception (circled in Figure 4), all changes in the Virta Health group were greater and considered to be more healthy than those in the usual care group.

Figure 4: Percent changes in multiple cardiovascular risk factors measured in persons with T2DM receiving either the Virta Health intervention or usual care. All changes favor the Virta Health group, with perhaps one exception (circled)  — persons in the usual care group show a reduction in blood LDL-cholesterol concentrations, whereas these concentrations rose in persons on the Virta Health intervention. However, as in the studies from the Volek research group (49, 53), this change was due to an increase in the size of the LDL-cholesterol particles. This is not considered an adverse health consequence. Redrawn from reference 64.

In June 2019, the two-year results of the Virta Health study were reported (66). All the benefits already apparent at one year were sustained, and 54% of participants receiving the Virta Health intervention had reversed their T2DM; another 18% were in remission. No patient in usual care showed this response. Overall medication use fell from 55% to 25% in the Virta Health group so that daily insulin use fell from an average of 89 to 19 units/day.

Another recent study found evidence of significant improvements in non-invasive markers of liver fat and fibrosis (non-alcoholic fatty liver disease) in persons receiving the Virta Health intervention and no change in the usual care group (67).

Atkins is the single strongest thread binding all those on the North American continent who have promoted the low-carbohydrate diet over the past century.

He is the link from Icelandic Arctic explorer Vilhjalmur Stefansson to the work of the Virta Health company, guided by Finnish entrepreneur and ultradistance athletic explorer Sami Inkinen.

Most importantly, the definitive studies of Westman, Phinney, and Volek, together with those performed by the Virta Health company, prove that Atkins was correct.

So when the 100-millionth patient with T2DM is “reversed” by the Virta Health intervention sometime before 2025, Atkins’s legacy will become one of the most significant in the history of modern medicine.

But what of Reaven? What will be his monumental contribution? How will he be remembered?

We take up that story next.