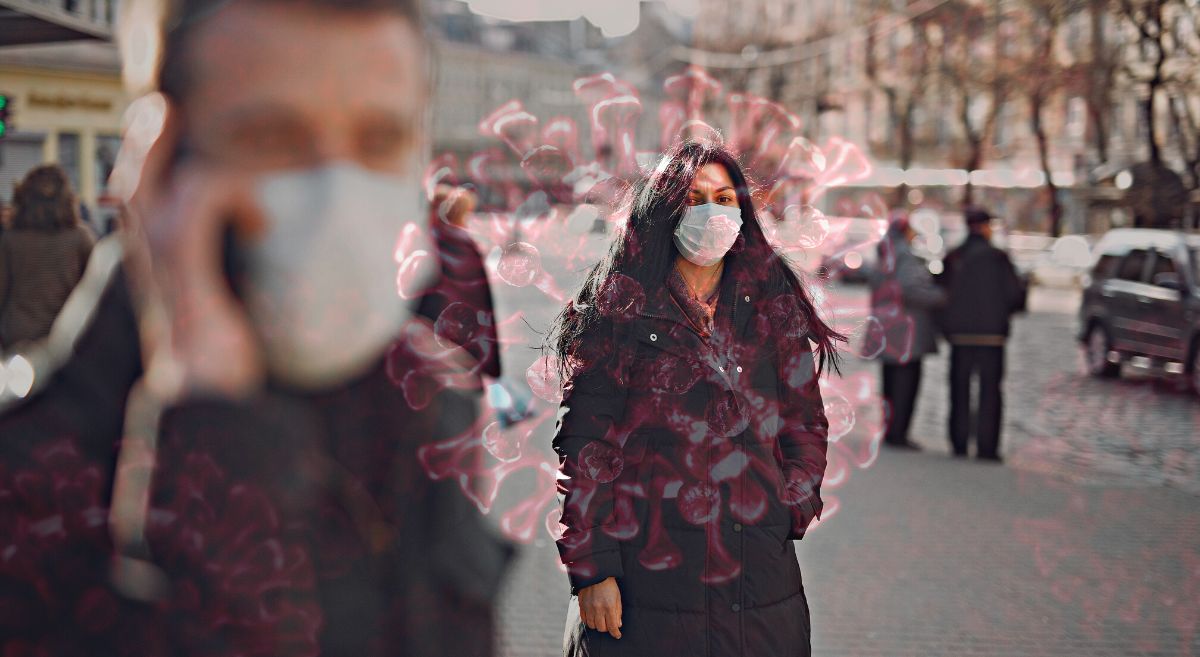 History is rich with tales of the human spirit’s untrammelled fight for freedom. Time after time, societies have forged ahead with non-negotiable, unwavering resistance against tyrannical regimes. In early 2020, however, societies across the globe bowed in submission to unprecedented restrictions and curtailments of freedom without question. Staying safe and surviving appeared to have become the pivotal issue around which everything else turned. This article by Charles Eisenstein explores the possible reasons behind our almost sheep-like resignation to the blanket impositions which forced a trade-off between our freedom and perceived safety. The striking passivity with which these impositions were met is an insidious symptom of safety culture. Eisenstein argues that the culture of fear that accompanied Covid-19 poses a very real threat to what makes life worth living. Left unchallenged, we risk the dilution of life to mere survival. – Nadya Swart

What Made Us So Compliant With Insane, Tyrannical COVID Policies?

A society riddled with fear will acquiesce to any policy that promises safety. How do we reduce ambient levels of fear?

I’m resuming my occasional series discussing the ground conditions that make society susceptible to pandemania. See my last pandemania post if you don’t know what I’m talking about.

I’m moved to resume this series because of some conversations I’ve had over the last few days that reminded me of why I am not letting the issue drop.

A man, I’ll call him Kyle, shared a story with me last weekend. He was a nursing home administrator who, without much question, because it was necessary to keep his job, got the mRNA injections.

Immediately following the second, he had an anaphylactic reaction and was rushed to the emergency room.

Subsequently, he had to leave his job because it was requiring all staff to receive booster injections. He shared his experience on social media, but his posts were removed for violating community standards.

Months later he looked himself up in the Vaccine Adverse Event Reporting System, or VAERS, to see if his case had been reported. It hadn’t.

Kyle didn’t seem angry at what had happened to him, but his trust in the system will probably never be restored.

Others I talked to are not so equanimous.

They are furious, and their fury does not diminish when they are told to forgive and forget, with no accountability for the people who enforced COVID-19 policies and no reason to think such a thing won’t happen again.

This fury can easily be channelled onto innocent or superficial targets. The danger that we blithely return to normal as if pandemania never happened is matched by the danger that the fury will be turned into fuel for hatred of each other.

Indeed, the most shocking aspect of pandemania was the splitting of society, of churches, clubs, schools and even families into warring camps.

I am writing this occasional series to do my small part to prevent pandemania from happening again. In my view, it is not enough to remove corrupt officials from power or to reform medical, pharmaceutical and regulatory institutions.

My inquiry is: What makes us as a society so vulnerable to their manipulation, to begin with?

What made us so compliant with COVID-19 insanity, so willing to believe the lies, so ready to acquiesce to degrading, tyrannical and irrational policies?

The first two conditions were the fixation on enemies, and mob morality and mass formation.

On to number three…

As long as the debate around public health policy takes for granted the assumption that its goal is to minimize illness and death, then inevitably, other values will be sacrificed at the altar of safety.

When we debate whether masks or lockdowns actually made any difference in COVID-19 illness or mortality, we tacitly grant the premise that if they did help, then we should do them.

We accept risk minimization as the paramount guiding principle of public policy. Accepting that, it follows that we should mask, distance and lock down forever. Why not — if safety is what we live for?

Does that sound far-fetched?

Various health authorities advise it, notably the new chair of the World Health Organization Technical Advisory Group, Susan Michie. Dr. Anthony Fauci opined in 2020 that we should never shake hands again. If we make everything about safety, they are probably right.

Actually, let me take that back: They are probably wrong.

The irony of the pursuit of safety is that it brings temporary success but, quite often, even more danger in the long run.

Consider the extreme, in which each person lives in an aseptic bubble. No disease vector can enter, so they are perfectly safe from infection.

On the other hand, without challenges their immune system deteriorates, leaving them vulnerable to any normally innocuous germ that gets in. They must maintain constant vigilance. They will never feel truly safe.

Furthermore, even if no germ ever gets in, they will suffer other ailments because beneficial microbiota will not be replenished and modulated through constant interchange with the outside world.

Life does not thrive in isolation.

During COVID-19 pandemania, no one lived in an absolute hermetic bubble, but there are nonetheless indications that the reduced transmission of colds and flus did weaken people’s immune systems.

Lots of people reported catching “the mother of all colds” after lockdowns were relaxed.

Higher rates of mortality post-pandemania might be due not only to vaccine damage but to the general disruption in immunity and well-being stemming from isolation.

In a further irony, it now appears that the shots may not even make people safer from COVID-19 (see here for an entrance to that rabbit hole).

It is the same with all forms of the security state. Countries with lots of prisons, big armies and foreign wars tend to suffer high levels of crime, domestic violence and violence-to-self (suicide).

If we make everything about safety, the public will be easily manipulated by appeals to whatever threat makes them unsafe.

To immunize ourselves against that, we have to recognize other values, such as fun, exploration of boundaries, adventure, sociality, touch, laughing together, crying together, breathing together and dancing together.

After all, the goal of life cannot be to one day go to your grave having been as safe as possible.

One obvious objection to the foregoing is, “It is fine to take risks oneself, but unethical to do anything that compromises the safety of others. No one has the right to put others at risk.”

Furthermore, since taking risks oneself potentially uses up hospital beds that could go to the severely ill, any risky behavior actually puts others at risk too.

This is a straw-man argument.

The point is not maximum freedom in reckless disregard for others’ well-being. It is that collectively as well as individually, we must affirm other values besides safety.

In the title essay of my new book, “The Coronation,” I asked:

“Would I ask all the nation’s children to forego play for a season if it would reduce my mother’s risk of dying, or for that matter, my own risk? Or I might ask, “Would I decree the end of hugging and handshakes, if it would save my own life?”

My point was that collectively, we were decreeing precisely that. We did so because we upheld safety as the paramount virtue. Social contact, civil liberties and the rest were construed as not “essential,” their sacrifice a minor inconvenience.

Collectively, at least in our political consensus, we decided to stay as safe as possible.

Under what circumstance would it actually make sense to pursue a life of risk minimization? Well, it might make sense if you were otherwise immortal; if by avoiding illness and injury you might stay alive forever.

Almost no one actually believes they might live forever, but many of us behave as if we could. That is why near-death experiences are often so transformative.

The same goes for the death of a loved one, or a close brush with death oneself. These unravel the illusion of permanence that modern culture so assiduously seeks to maintain.

I won’t say more about this, as I’ve written about death phobia extensively in “The Coronation” and talked about it a lot on podcasts, and I’m tired of saying the same thing over and over. It should be obvious — the goal of life cannot be to survive it, and the attempt consigns us to a cramped and fearful half-life.

The mania for safety and the phobia of death are not a sudden, inexplicable madness.

They are part of an encompassing state of human beingness that has reached its extreme in modern civilization. It is the separate self cast away in a spiritless material world that yearns to protect itself above all else.

Those who know themselves to be part of a story bigger than their biography more willingly risk life for its sake.

The best example of that is simply the love story. To love is to include others in the circle of self. It is to expand beyond one’s individuality. Your pain and your joy are inseparable from your beloveds.

Of course, we still want to stay alive, but for the lover, it is not the absolute highest priority. That is why I have long warned the environmental movement away from the rhetoric of “We must change our ways, or we will not survive.”

The real solution is to fall back in love with the living world, to see it as a beloved, not as a collection of resources, a waste dump, or an engineering project. Then we will not only survive; we will flourish, as one does when they are partnered with their lover.

Safety mania and death phobia are signs of disconnection from purpose and passion. If you have nothing more important than your own life, then preserving life is left as the only purpose.

Because our civilizational answer to “Why are we here?” has unraveled, many of us individually have trouble answering that question too, for the individual story draws from the collective.

OK, I realize I may have risen to too high an altitude for the practical purpose of preventing the next bout of pandemania. So I will end with this: We can reduce our general susceptibility to fear-mongering by reducing the levels of fear current in society.

A society ridden with fear will acquiesce to any policy that promises safety. How do we reduce ambient levels of fear?

There is no single answer. Besides, each one of us already knows how.