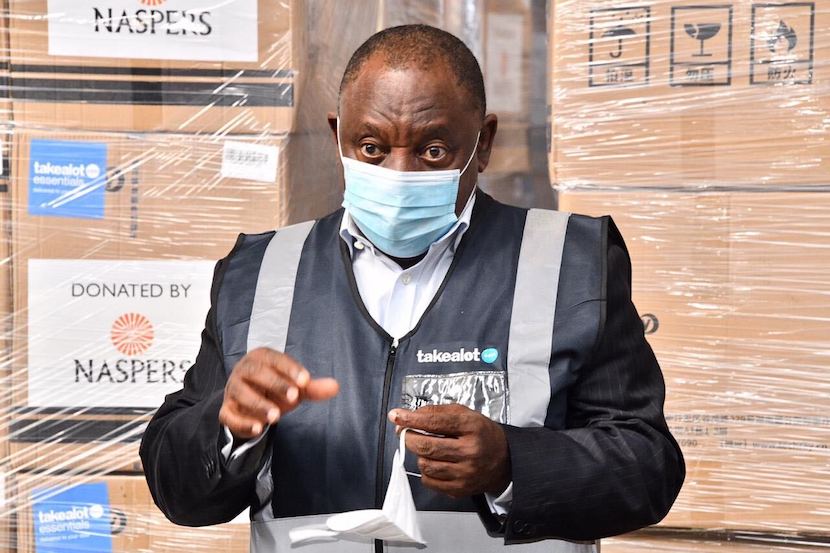 In episode 28 of Inside Covid-19; a whole new ball game with heightened infection risks as SA children return to schools; House prices set to take a 10-20% hit when market reopens; Africa’s low infection rates are no reason for complacency; A nasty lockdown side-effect as mental illnesses, addictions on the rise; and promising developments on the drug front from AstraZeneca and Gilead. – Alec Hogg

First, in the Covid-19 headlines today:

Ron Whelan is the Chief Commercial Officer at Discovery Health. Good to be talking with you again, Ron. You’re really keeping us up to date with all the details of what’s going on and the latest now is the schools. When do they open? How do they open? Who goes back? What does it mean for the spread of the virus etc? But maybe let’s just start at the very beginning. When do South African children go back to school?

Well it looks like they’re going to start on the first of June from all of the reports coming out last week. Obviously teachers will begin to go back now in May and begin to prepare for a June start. From June onwards it will be a staggered start: starting with grade sevens and grade twelves and then it looks like it’s probably going to be six to eight weeks at the very least, which would imply June and July Trace – phase back to school. I think the priorities are primarily scholars who’ve got exams coming up, hence the grade twelves are starting a little bit earlier and there will obviously be some pretty dramatic reconfiguration of the holiday calendars going forward. It looks like there’ll be much, much shorter breaks and it looks like there will definitely be an extension of the school year into December.

The big question here is that private schools and public schools have got different schedules or different holidays – are they going to have to just work it out?

Yes, it certainly looks that way, Alec. Every school calendar runs on a number of learning days per year and both the public and the private schools are working on recouping the learning days lost as a result of lockdowns. It’s a tricky equation to run in that a lot of schools, particularly in the private space, are running homeschooling programs. My kids for instance were homeschooling before their April break and they’re now going back to school as of Tuesday. So the school schedule starts again on Tuesday. There’s a deliberate homeschooling program. It’s quite interesting to watch – everyone is running off Google Classroom, Microsoft Teams and Zoom meetings and so on and so forth. But that’s not sustainable for South Africa. We need to get kids back into school. It’s imperative for the economy, it’s imperative for our kids development – both their academic development as well as their social development. The reality is not all kids have access to computers and hardware and connectivity at home. Even if you do have Internet connectivity and hardware – there’s often more than one kid per family and there’s often not more than one computer per family, so there are real barriers and constraints for homeschooling in the long term in South Africa.

So there are lots of challenges associated with it, but from the medical perspective – what about that challenge? So far the idea has been to keep everybody in lockdown. Now, if the children go back to school – we know how viruses and flus and that kind of thing spread quickly amongst children back into their homes.

Yes, that’s a great question. This has probably been one of the hardest things for us to manage as a country going forward. There are three competing priorities. As I mentioned, the first priority is a learning and social interaction priority – obviously, kids need to learn. The second priority is the health and safety priority or public health priority (I’ll come back to that in a little bit). But the third priority that we’re also facing at Discovery and many other businesses across South Africa is an economic priority, in that schools take care of kids during the day. And, given in many instances both parents work or you end up with single parent families – schools play an important part in the economy and if you don’t have schools open it’s hard for parents to get back to work. And this is one of the reasons that Denmark and Germany (and other places across the world) have actually pushed for schools to open a lot earlier. So these are three important priorities: the learning priority, the health party and the economic priority. Looping back into the health priority, Alec – as you mentioned – schools are a big public health risk. We’ve mentioned this previously – that schools are one of the big drivers of the replica -ability of viruses. So, one of the first things you tend to shut down in any infectious outbreak or epidemic are schools, for that exact reason – it’s high transmissibility of the virus. The fortunate thing we do have at schools in terms of Covid is that Covid has a much less complex effect on kids and certainly we’re seeing much less severe infections in kids and much less severe complications in kids. In fact, most kids end up with uncomplicated infections and many instances of asymptomatic infections. So that’s the really good news around Covid. That’s not to say that kids don’t get infected, number one. So kids definitely get infected by Covid. A recent paper by the Lancet last week clearly demonstrated this. What they did was they looked at viral loads across different age categories and populations and they found that the viral loads across kids is exactly the same as a viral load distribution across adults. The reality is kids just respond differently to Covid. It’s also not to say that there isn’t a chance that you end up with some complicated and severe infection in a child. So there are some worrying reports coming out of London, in particular, where some children have picked up more severe infections. But, broadly speaking on a population basis – most kids are asymptomatic and carry relatively mild infection. That’s the good news here.

The bad news is they can spread it, so no more visits to Granny and Grandpa, but their own parents might not be without risk.

I think we’re moving into a phase where we will manage Covid as family clusters or what that means is we’re seeing some interesting movement out of China, in particular. China’s teaching us a lot of lessons in managing Covid and particularly – getting kids back to school. What happens in China is the entire family screens every day. So the entire family takes the screening survey every day – Mom, Dad, all of the kids in the family – and they submit that screening survey to the school as a wellness certificate, if you will, and that gets recorded. So, if there is any Covid-type symptom across any given family unit – they would advise that child to rather stay at home. And certainly, if a child is ill (all of the standard Covid symptoms that we’ve spoken about several times now – fever, cough, sore throat, any diarrhoea or abdominal symptomatology) they would rather have that child stay at home. So, that’s the first mechanism – family unit screening for children to go back to school.

How did they actually screen in China? And can we do it in South Africa?

Screening includes two components. The first component is a standard questionnaire on symptoms of screening and that’s self reported answers to questions. The second part of screening is the temperature monitoring and what you’re seeing across China – we will see this across South Africa. We’ve certainly implemented this across our businesses in South Africa – it’s temperature monitoring as soon as someone comes into a school environment, so that will just become standard practice now – all children’s temperature will be screened when coming into school. As we mentioned last week, if temperatures are raised – they will then be transferred either home or into a medical room for further checks around Covid symptomatology or signs.

Would they have to go to school presumably with masks as well?

Yes, I think it’s common cause that masks are going to be required and certainly in inside environments, masks will be mandatory – no doubt about that. That’s a national priority now, not only a school priority. I think what we will also see is some level of social distancing in classrooms, wherever that is possible. So we’ll definitely be pushing for social distancing. What we are seeing in some other markets is staggered starting times for schools. So certain classes come back earlier, certain classes come back later – there’s a staggered starting time across the beginning of the day. We’re seeing in some other markets some interesting barrier protection – perspex screens, for example, around desks (particularly in China). And I think we’re going to see all of these things begin to play out across schools in South Africa over the next few months. I must say I’ve been very impressed by the questions schools have been asking us and the ideas that have come out of schools over the last three or four weeks have been very, very impressive. I’m encouraged by the progress schools have already made in preparing for returning in a very safe and responsible manner.

It’s extraordinary, isn’t it? You mentioned earlier that part of the responsibility now is gonna be on the family unit, but if you’ve got a kid who hasn’t got access to the Internet, they’ve already lost quite a lot of schooling, and they might be just a little bit edgy – you could be inclined to say, ‘Well go off to school because Mum and Dad have to get to work’. So, there’s going to be a lot of responsibility on the family unit.

We’re all going to play a role in flattening this curve and we’re trying to flatten the curve on a national level, we’re trying to flatten that curve across our businesses, and now we’re trying to flatten the curve across our schools and our communities. We all play an important role in this and we all need to be responsible for the health and wellbeing of our communities. Probably, the trickier thing in schools that we will need to manage when it starts – and I would urge all schools to be prepared for this – is that there will be instances where infections pop up. There is no doubt that at some point in time, once you reopen again – you will end up with a Covid case and hopefully that is a very isolated case that you’re able to contain very quickly, but there is a chance you will end up with a cluster of cases. So I think the one thing I would caution schools and the leaders of schools is to both prepare on the preventive front (so all of the screening, the temperature monitoring, the masks, the barrier protections) but also recognise that while those barriers are good – they’re not impenetrable and there is a good chance the schools will end up with clusters of infections. They’ve got to be prepared – for there is quick isolation and quarantine, a quick mechanism around contact tracing. This is something that we’ve worked hard at Discovery to put in place. We have a dedicated Covid-19 clinical response team who is ready to respond to any potential outbreak across Discovery offices and we’re able to move very quickly if anything comes about. I would urge schools to contemplate something similar to that.