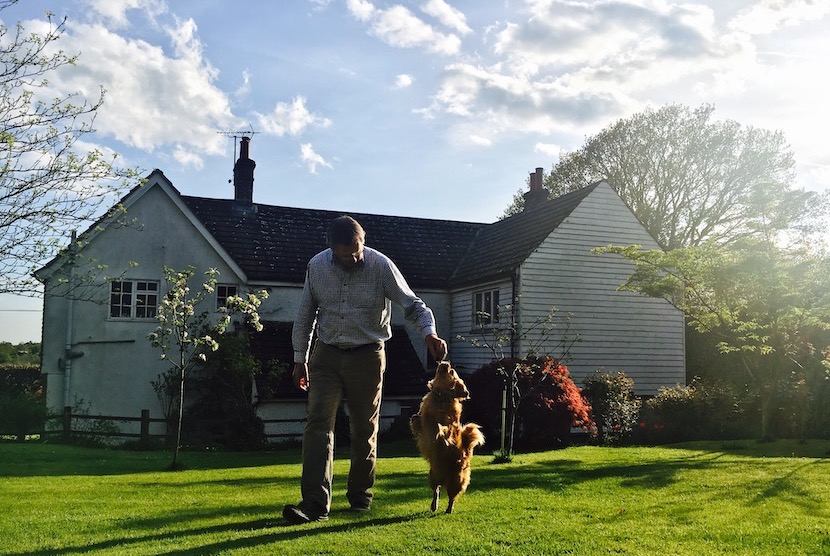 In Episode 14 of his new book, author Julian Roup wonders at Britain, a nation of lions led by donkeys in the Covid-19 catastrophe.

Make no mistake – despite the spring weather, we are in the middle of a storm. The total death toll in Europe, excluding Russia, has passed 100,000, according to Johns Hopkins Coronavirus Resource Center. The global death toll has reached 162,070.

But there are small mercies in among this dire news. I realise how lucky we have been that Boris came down with the virus. Imagine what the death toll would have been had he been well? Between celebrating his election victory, threatening the EU with a no-deal-Brexit, going on holiday to the Caribbean and giving the Cobra Meetings a miss for five weeks as the solids started to hit the fan, he has been an absentee landlord, and probably just as well. Things could well have been worse no doubt had he been properly in charge.

On the home front we’ve sprung a leak from our water meter in the garden. I report it to SE Water and Claudia is most helpful and promises an inspection visit soon. I wonder how many days it will take and am astonished to get a call from an inspector an hour later who says he is parked out in front of the cottage and is looking at the problem for us. How amazing is that! I am humbled by people like this, ordinary people going about their work keeping the country’s infrastructure going. I thank him profusely.

As trouble never comes singly, Jan announces that our dryer has finally bitten the dust and orders a swivelling garden whirligig dryer which she says will save money on electricity. Let’s hope the sun continues to shine.

I get stuck into some work for a client, H&H Classics, who will shortly be selling four vehicles found abandoned in a Derbyshire field for 35 years, which will be sold on April 29th in an online auction. Each of the two cars and two trucks will need years of loving restoration which will cost a fortune. I am always amazed by the passion the classic car collecting fraternity have for these old crocks, which they restore to concours d’ėlėgance condition with no expense spared. It will be wonderful to see before and after pictures some years hence.

I walk down to check on Callum who I find at the far end of his paddock. As I come up to pat him he gives me a good nip on my right arm, as if to say “I haven’t forgotten the arm that whacked me!” Getting him back into work may prove interesting, when it comes.

This morning, The Guardian reports that disabled people are being left without food after being missed off the government’s list of those vulnerable to coronavirus.

The government set up an online register billed as a way to reach ‘extremely vulnerable’ households in England who have been told to shield for 12 weeks – either offering them food parcels via their local authority, or liaising with major supermarkets to give priority for online delivery. But now it has emerged that large numbers of disabled and older people are being excluded from the scheme, due to the highly selective criteria.

One hundred people with severe disabilities and chronic illness say they have been rejected for the government’s register and thereby left without any support to access food without leaving their home, despite being particularly vulnerable to coronavirus.

Their conditions include cancer being treated with chemotherapy, heart disease, tetraplegia, motor neurone disease (MND), myalgic encephalo myelitis (ME) and muscular dystrophy. Some disabled people reported sleeping to avoid hunger pains, or living off fruit. At least one rejected for assistance has gone on to contract coronavirus.

“I’ve had four letters to say I should be shielding, yet the Gov UK site doesn’t recognise me to be put on the online vulnerable list,” said 40-year-old Vicky McDermott in Northumberland, who has the immune disorder rheumatoid arthritis and a daughter with a life-limiting condition, who has also been told to shield.

“I tried registering last night for the fifth time. The supermarkets won’t put us on the priority list, as we’re not registered with the government.”

But both doctors and patients report confusion over how this is being handled. When Denise Stephens, 41, who has multiple sclerosis and is immuno-compromised, was rejected, she followed instructions to call her GP but hit a brick wall. “My GP said they couldn’t help me and they didn’t know why the government is directing people to them about this,” she said. Last month, Stephens contracted coronavirus. She has had to call an ambulance twice to her London home but is still not eligible for help with food or medication.

The charity WellChild estimates many of the 100,000 children and young people with serious medical conditions in the UK do not meet the criteria for the extremely vulnerable list.

There are also concerns that the government is excluding people whose disability means they cannot physically distance safely at supermarkets, such as those with sight loss or autism. One woman with autism and mental health problems, who is self-isolating, said she had lost her carer, who helped her shop, but still did not make the vulnerable list. “I’m absolutely terrified I’ll be dying of starvation in the coming weeks,” she said.

Happily the government is facing increasingly rigorous scrutiny of its actions in several areas over its preparations for and response to coronavirus. Thus far the main areas of criticism are:

The most obvious and tragic crisis of all. The UK has now recorded more than 16,000 coronavirus-related deaths in hospitals, and thousands more are believed to have occurred in care homes and elsewhere. This puts the UK on an apparent course to match the very high death rate of places like Italy. The government is, however, urging caution over direct comparisons, given the different ways in which statistics are collected across nations, time lags in terms of the outbreak, and demographic differences. At Sunday’s Downing Street briefing, the deputy chief medical officer for England, Jenny Harries, said a meaningful comparison might not be possible until some months after the pandemic had eased. Why am I not surprised?

The UK remains very low down the international league table for the proportion of the national population tested for the virus, a measure seen as crucial to tracking its spread and thus laying the ground for a gradual end to the lockdown. The government has already missed its target of 25,000 tests a day by mid-April, and remains some way short of its end-of-April goal of 100,000 a day; 21,626 were carried out on Saturday. There is also no sign of the promised millions of simpler antibody tests, as their accuracy remains dubious, even though the government bought 3.5m of one type.

This has proved of the most regularly difficult tasks for the government – getting enough PPE to not just hospitals, but also care homes and other settings like prisons and local authorities. On Friday, it emerged that guidance had changed to say NHS staff should use smaller, less effective aprons if, as seemed imminent, stocks of full gowns ran out – troubling news for hospital workers amid growing numbers of staff deaths.

A consignment of gowns was due to arrive as part of a shipment of PPE from Turkey on Sunday, but has been delayed. Ministers have pointedly declined to guarantee supplies as needed, saying the situation is very challenging given the massive global demand for supplies. In the meantime, staff have to decide whether to agree to work without proper protection.

On the one hand, despite initial fears, there has not yet been a massive shortage of the complex machines used to help people breathe as their lungs recover from the virus, but even after the UK’s target to secure 30,000 was downgraded to 18,000, that figure has still not been met. However, there has been political fallout over the apparent confusion about a plan to get private companies to design and build new models.

As with ventilators, while there was initial panic at the idea of critical care beds being quickly overwhelmed, this has not been the case. The temporary acquisition of private spaces and the rapid construction of new sites has seen the number of these beds rise from about 4,100 in February to more than 5,500 now, with the occupancy rate falling from 81% to 58%. However, the overall numbers remain below what was pledged.

This might be the big one in terms of future focus. While Boris Johnson’s long absence due to coronavirus is bad luck, the news that he missed five meetings of the governments emergency committee while taking a break from No 10 when the virus was first emerging in the UK has prompted condemnation. His ministers insist that Johnson remained in charge.

Why is it, I wonder that Britain is once again a nation of lions, led by donkeys? This phrase, popularly used to describe the British infantry of the First World War and to blame the generals who led them, seems relevant again. If one replaces NHS staff for soldiers, the comment holds up to scrutiny.