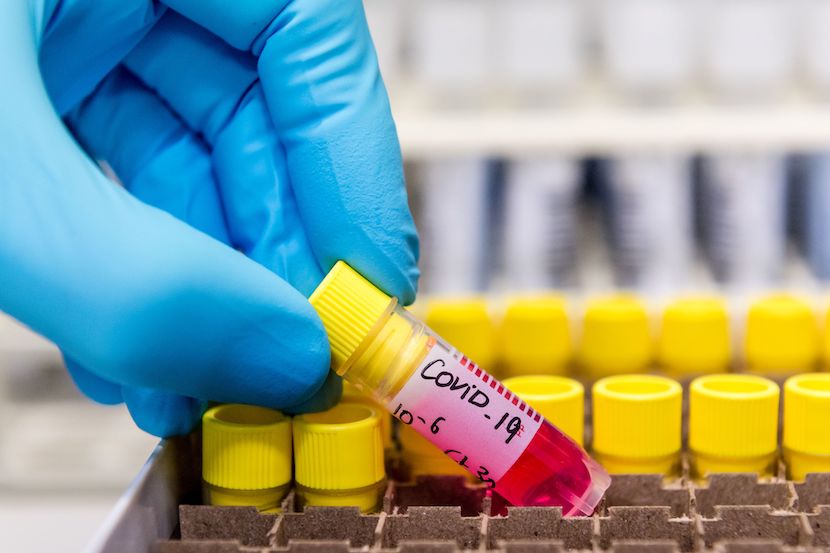 Have our Covid-19 political leaders been consuming ‘flapdoodle’? (see story for an amusing explanation of what amounts to ‘smoking their shoes’). Here ‘datanaut’ and information management expert, Ian McGorian, joins the ranks of data skeptics who are simply not buying the government’s statistical justification for ongoing lockdown measures, picking it apart trend by trend and exposing how the sexy curves don’t hold up to universal global infection and death rates. Should their critiques be proven correct, what the official figures might actually show is a false narrative designed to keep the populace in fear to achieve political ends. Ends which some cynical commentators say are part of a nefarious opportunism, a perfect demonstration of the saying, ‘never let a good crisis go to waste.’ They claim it’s all based on a socialist/communist ideology aimed at destroying a free market system and redistributing wealth instead of creating more to go around. Our Constitution has been ‘violated’, regardless of the expected short-lived legal triumphs over nonsensical Covid-19 ‘protective’ regulations. The most germane question perhaps, as the ‘modelling circus pitches their tents,’ is this; Do Cyril and Zweli’s advisors have a credible measure by which they might legitimately assert lockdown efficacy? – Chris Bateman

Who do you believe?

No one who believes that patriotism matters can seriously believe it is in the national interest to undermine the conditions that make lucid forms of it possible. And one of these forms must be the ability of government to understand a situation, respond appropriately and tell the truth about what they are, or are not, doing. On these three points we take umbrage with the advisors and experts who have guided government policy.

Is it reasonable for democracy to be discarded in the great rush to a rigorous lockdown and the subsequent drift into the state in which we now find ourselves? If the suspension of the ethos of the Bill of Rights of the Constitution – your inalienable rights as citizens – has been so easy to discard, does that not make you just a little fearful? At the heart of the constitution are seven fundamental values: democracy, equality, reconciliation, diversity, responsibility, respect and freedom. Is your current discomfort perhaps rooted in the erosion or destruction of these tenets?

This situation was precipitated by Covid-19. As is our right and duty as citizens, we sought to understand this nexus by examining government’s proffered posits. Among them are some so egregiously and obviously false that they cry out for loud reaction.

The chronology of Covid-19 is widely known. We are more concerned with the following questions.

“We will prioritise the lives and livelihoods of our people above all else, and will use all of the measures within our power to protect them from the economic consequences of this pandemic” Cyril Ramaphosa 23 March 2020

A standard definition of the word livelihood is a means of securing the necessities of life. Since this implies employment or trade this must surely rank as an absurdity when announcing a lockdown and the inevitable destruction of both vital agencies?

“Within our power to protect” is a nice way of framing an inconvenient truth. The cupboards are bare, if we are to do anything we will need to borrow the money or divert it from somewhere else. The first is counter to every policy previously announced, the avoidance of further and unrestrained debt has been a consistent message. A debt that has become increasingly more expensive as a result of downgrades by the Investment community. The diversion tactic must surely describe exactly what it does – we stop doing what we have to do and do something else instead. In either case the outcome cannot escape even the simplest thinking.

Lockdown was declared with the intention of delaying the spread to buy government time to prepare the health systems for the expected surge. Indeed, this has been the mantra echoed around the world. It has become pervasive in the phrase “flattening the curve”, this really piqued our interest.

When Lockdown was announced on 23 March, South Africa had 34 confirmed cases of Covid-19. The general populace, driven by fear of the unknown enemy, tried as best they could to comply. It seemed sensible, we could see what was happening in Europe. But it must have been obvious to the advisors that vast numbers of the population simply could not comply.

And by then the modelling circus had pitched their tents. Few of us had spent much time on SIR/SEIR models previously as they were outside our specific domains. But something seemed odd, the numbers intuitively did not make sense. And as a country the dice was being rolled based on these numbers.

First in the game was the South African Centre for Epidemiological Modelling and Analysis (SACEMA), with a model that predicted deaths between 87,900 and 351,000. These guys must know their stuff, so let’s plug in an SIR and see how they got there.

Firstly, the infection prevalence rate did not reflect the experience of any country in the world, period. Of the 25 countries that already had 1,000 confirmed cases, the average infection rate was 2.5%. The poster children for devastation were Italy and Spain, and they were both lower than 10%.

Question: What would possess SACEMA to model an infection rate range of 10% to 40%?

If they are unable to provide a credible answer we hope they can sleep well.

Next, we had Professor Salim Abdool Karim weighing in as the chairman of the Ministerial Advisory Council, flourishing this graph to convince us all of the success of lockdown with the associated flamboyant descriptors: 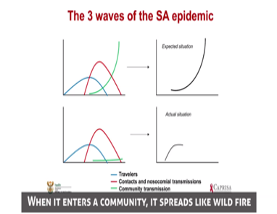 It did not escape our attention that the “expected situation” graph is linear while the actual situation is logarithmic. Even the mathematically literate have difficulty in immediately understanding the relationship between linear and logarithmic visually. Presenting these graphs for public understanding is outrageous subterfuge.

Critically, the “actual situation” indicates a log described flat line of the infection rate, which is not a reflection of the actual data. So, let us cut to the chase, and analyse that transparently: 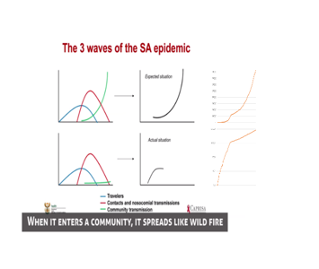 The top right linear graph looks hardly different from the “expected situation”, the bottom right log graph certainly does not flatten the curve, it accelerates after the initial shoulder (a feature common to log graphs).

The other graph so proudly admired and presented as a descriptor of how lockdown has succeeded is a further dose of flapdoodle: 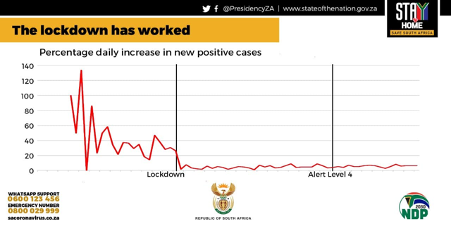 The seemingly alarming variation in the graph prior to lockdown describes expected fluctuations when cases are fewer than 1,000. More importantly, the right side of the graph describes a curve that is exponentiating. And if there is some credibility for Lockdown surely this red line would have reduced some two weeks after Lockdown, we can’t seem to spot this. In no way or form can it be claimed as a “lockdown has worked” descriptor. That persistent red line above the zero tells a dramatic story as it reflects an R0 above 1.

Put simply, our infections are exponentiating. Consider the facts. At lockdown we had a three-day average of 41 confirmed cases, 21 days after lockdown, 111 cases—almost triple. Then we had lockdown level 4, when our cases averaged 285 per day—almost triple. And as we stand (21 May) with these supposedly effective interventions at 829 per day—almost triple. And 20 times more than when Lockdown began. Question: Do the advisors have a credible measure by which they might legitimately assert the efficacy of lockdown? In answering this question, please hesitate with the SIR modelling circus before the following questions are also addressed.

Throwing a reduced number of susceptible, deaths, infected, recovered or any other metric assumes absolute clarity on the inputs. Reading the Ministry of Health slide deck of 19 May 2020 leads us to demand that the conglomeration of think tanks that conspired to these assumptions should clearly spell out the following imponderables to us in the hoi polloi.

Question: Your model predicts that the peak active case count will be roughly one quarter of the current total global cases, despite having a population of under 1% of the world’s population, despite a growing number of countries that are clearly past the peak. Is this plausible?

Question: On what basis are our predicted deaths per 100,000 supposed to be slightly below Belgium, the country most affected by Covid-19?

Question: We currently have one of the lowest death rates in the world so what dramatic event is going to radically alter that? Surely you should share this bombshell knowledge with the citizens of South Africa?

Question: Our infection rates are among the lowest in the world, in line with other developing countries. How does the panel of experts explain that?

Question: Despite no scientific evidence, apart from falsified conjecture and crystal ball gazing, for the continuation of lockdown. Why is the country still subjected to this nightmare based on your advice?