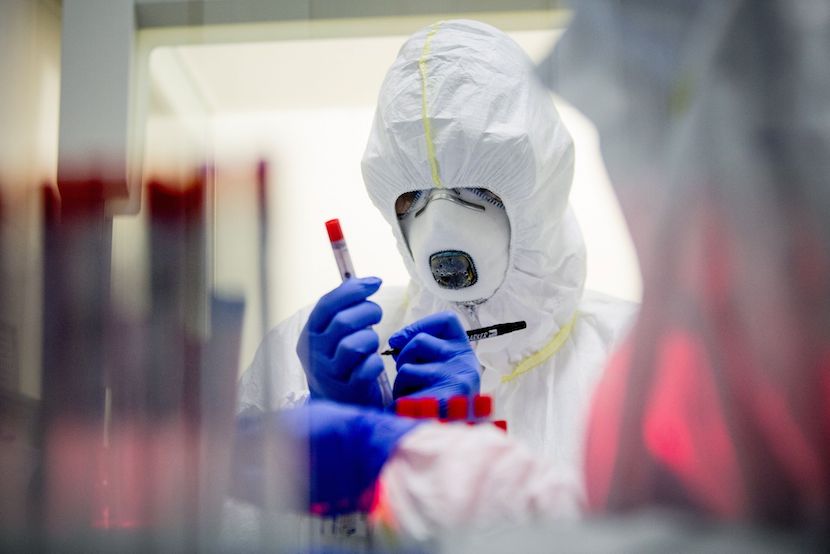 Countries across the globe are tightening coronavirus restrictions in fear of a second wave of Covid-19 infections. The wearing of face masks is now being made compulsory by those authorities that downplayed their importance just a few months ago. As of mid-March, about 10 countries had policies recommending face coverings – now more than 130 countries and 20 US states do, says Masks4All, an activist group of researchers that advocates the use of homemade masks during the pandemic. This major shift in attitude demonstrates the desperation felt by world leaders in the face of Covid-19 – for which a vaccine is yet to be produced. In response to President Cyril Ramaphosa‘s address on Sunday, South Africa is also in the process of tightening coronavirus restrictions, with the reintroduction of a curfew and ‘booze ban‘. South Africans, however, have yet to ride the first wave of Covid-19. – Nadya Swart

(Bloomberg) — Resurgent virus cases prompted tighter social distancing and hygiene rules around the globe. California closed indoor dining and bars, and face coverings will be compulsory in all shops in England from July 24. Tehran closed schools, universities and religious sites for a week.

Hong Kong imposed its strictest social distancing measures yet, Japan said a new state of emergency is possible, while the Australian state of Queensland imposed a quarantine on some visitors.

The U.K. economy grew at a slower-than-expected pace in May, while Singapore plunged into a recession last quarter. The World Health Organisation said Covid-19 probably won’t disappear in the coming months, and called for caution over hopes for a perfect vaccine.

U.S. small-business optimism jumped in June by the most since December 2016 as states reopened and owners expected the current recession to be short-lived, the National Federation of Independent Business said Tuesday.

The group’s index of sentiment increased 6.2 points in June to 100.6, the second straight gain after hitting a seven-year low two months earlier. More states reopened their economies in June, though a number of governors paused or rolled back their plans to reopen at the end of the month due to spikes in the virus.

Austria added 10 countries to its aircraft landing ban, while allowing flights from Milan again. Aircraft coming from Romania, Bulgaria, Albania, Serbia and the other non-EU countries of former Yugoslavia, as well as Egypt and Moldova, won’t be allowed to land in Austria starting Thursday, according to a new decree. The ban on flights from the U.K., Sweden, Portugal, Iran, China, Russia, Ukraine and Belarus remains.

Ocado Group Plc reported a 27% rise in half-year retail revenue as more consumers turned to online grocery shopping. The U.K. company said it was boosted by unprecedented demand during the pandemic, which nearly doubled its retail profit, but investment in its faster-growing overseas licensing business caused a pretax loss of about 41 million pounds ($51 million).

The number of coronavirus-linked fatalities in England and Wales accounts for just 5.8% of total deaths in the countries, the Office for National Statistics said. The total remains below the five-year average for the third consecutive week.

The decline in South African mining output slowed in May, even as data showed that lockdown restrictions had a more severe impact than previously reported.

Total production decreased 29.8% from a year earlier, the Pretoria-based Statistics South Africa said. While that’s an improvement from April, the drop for that month, when the country was in a strict lockdown, was revised to 50.3% from 47.3%. 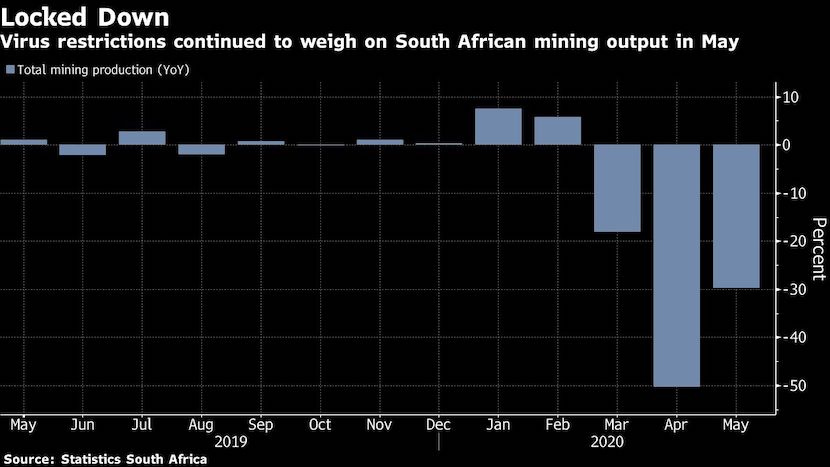 The European Union will recommend keeping its external borders shut to Americans and most other foreigners for at least two more weeks as fears grow of a second coronavirus wave, according to three officials familiar with the matter.

A resurgence in virus cases around the world is hampering European efforts to emerge from national lockdowns and revive domestic economies as the summer tourist season gets underway.

Hong Kong ordered gyms and bars to close for a week, restored strict limits on public gatherings and introduced fines for anyone refusing to wear a mask on public transport in a fresh bid to prevent the resurgent coronavirus from spiraling out of control.

The financial hub reported 40 local cases on Tuesday, bringing the total outbreak to 224 people in around a week. The tougher measures, to take effect Wednesday, include limiting public gatherings to a maximum of four people. Hong Kong will require inbound travellers who have been to high-risk regions in the last 14 days to pass a virus test before boarding their flights.

British Airways is planning to raise more than $1 million from the sale of paintings and prints from its corporate art collection at Sotheby’s.

The 17 artworks will be offered in two auctions and are expected to fetch from 920,000 pounds ($1.16 million) to 1.4 million pounds, Sotheby’s said Tuesday. The top lot of the group — an abstract painting by British artist Bridget Riley — will be part of Sotheby’s Rembrandt to Richter evening sale on July 28.

The largest share of the Pentagon’s billions of dollars in accelerated payments to contractors — intended to help mitigate the impact of the Covid-19 pandemic — is going to four of the country’s five biggest defense companies.

Lockheed Martin Corp., Boeing Co., Raytheon Technologies Corp., Northrop Grumman Corp. and the United Launch Alliance LLC joint venture are the top beneficiaries of the Pentagon effort, according to a previously undisclosed May 15 letter to Senator Elizabeth Warren from Ellen Lord, the Defense Department’s undersecretary for acquisition and sustainment.

A potential new wave of infections this winter poses a serious risk to the U.K. and could lead to as many as 120,000 hospital deaths from September to June, according to a report.

A second wave of Covid-19 could be more serious than the first as the National Health Service deals with a backlog of patients needing assessment and treatment and a potential outbreak of annual seasonal flu, researchers from from the country’s Academy of Medical Sciences said.

The World Health Organisation has raised concerns over the Philippines’ rising number of new cases that have swamped some of the nation’s major hospitals.

The proportion of positive cases in the country is gradually increasing from about 6.5% two weeks ago to about 7.8% on Monday, WHO representative in the Philippines Rabindra Abeyasinghe said. “This is worrying as it shows that there is continuing transmission. This is also reflected by the increased number of admissions into hospitals,” he said in a virtual briefing organised by the Foreign Correspondents Association of the Philippines.

Swatch Group AG cut about 2,400 jobs, its biggest cull in at least three decades, to trim its store network as the Swiss watchmaker became unprofitable for the first time.

In a break with its strategy during previous crises such as the 2009 financial downturn, Swatch is leaning more on slashing jobs, a signal that this year is different. Chief Executive Officer Nick Hayek has said that during hard times, the problem with cutting jobs is that it’s difficult to find qualified staff when the market rebounds.

Authorities in Tehran closed schools, universities, Shia seminaries, mosques and other sites of religious gatherings for a week, the official Islamic Republic News Agency reported. Schools and universities had been partially reopened while communal Friday prayers remain suspended in the capital since late February.

Thailand is temporarily halting exemptions from a 14-day quarantine given to some groups of foreigners, following two separate incidents of possible Covid-19 exposure to the community.

Contact tracing teams are tracking the steps of an Egyptian air force member and a daughter of a Sudanese diplomat who both tested positive for the virus. They entered Thailand but were exempted from a mandatory quarantine at state facilities.

Some Chinese ports are jammed again on virus testing of food (2:40 p.m. HK)

Intensive testing of meat, seafood and other products for the coronavirus has tripled customs clearance times at some major Chinese ports, raising concerns the delays could ensnare global trade flows.

It normally takes about three days to clear the produce but is now taking as long as 10, said an official with Bojun Supply Chain Co., which provides buyers with customs clearance services on foods including frozen products.

The U.K. economy grew at a slower-than-expected pace in May even as the government eased some of the coronavirus lockdown restrictions.

Gross domestic product rose 1.8% from April, when it plunged by a record 20.3%, the Office for National Statistics said Tuesday. That’s lower than the 5.5% forecast for the month, and it left output down by 19.1% in the latest three months.

Germany’s coronavirus infection rate fell to 1.0 on Monday from 1.04 the day before. The government is trying to keep the figure below 1.0 to prevent a second wave of infections. There were 261 new cases in the 24 hours through Tuesday morning, compared with 210 the previous day and almost 7,000 at the peak of the pandemic in late March.

Japan could declare a state of emergency again if coronavirus infections increase further, though the government wants to avoid doing that if possible, Economy Minister Yasutoshi Nishimura says at a briefing in Tokyo.

Nishimura urged bars and restaurants to follow the government’s guidelines for preventing the spread of infections and warned that establishments could be asked to close if they don’t comply. Tokyo reported another 143 cases, the second consecutive day that infections fell below 200, after breaching that marker for four days straight through the weekend.

Areas of Sydney have been declared coronavirus outbreak hotspots by a state government, as health authorities fear the second wave of infections in Melbourne has now spread to Australia’s largest city.

The declaration by the Queensland state government means that anyone who has been to the areas of Liverpool and Campbelltown in Sydney’s southwest will need to quarantine in a hotel should they enter Queensland.

Gross domestic product declined an annualised 41.2% from the previous three months, the Ministry of Trade and Industry said in a statement Tuesday, the biggest quarterly contraction on record and worse than the Bloomberg survey median of a 35.9% drop. Compared with a year earlier, GDP fell 12.6% in the second quarter, versus a survey median of -10.5%.

Face coverings will be compulsory in all shops in England from July 24 as part of attempts to stop the spread of coronavirus, Health Secretary Matt Hancock will announce Tuesday.

The move, which will be enforced by fines, comes after pressure from labor unions, business lobbyists and opposition politicians, who accused Prime Minister Boris Johnson’s government of lacking clarity in its guidance for defeating the pandemic.

Coronavirus cases in the U.S. rose by 64,605 from a day earlier to 3.34 million, according to data collected by Johns Hopkins University and Bloomberg News. The 2% increase was in line with the average daily increase of 1.9% over the past week. Deaths rose 0.4% to 135,400.

It would be unrealistic to expect that a perfect vaccine will become available to everyone immediately, and it’s not realistic to expect Covid-19 to disappear in the coming months, said Mike Ryan, head of the World Health Organisation’s emergencies program, speaking at a briefing in Geneva.

“There will be no return to the old normal for the foreseeable future,” said Tedros Adhanom Ghebreyesus, head of the organisation, an agency of the United Nations.

“I want to be straight with you: there will be no return to the old normal for the foreseeable future,” WHO Director-General @DrTedros says pic.twitter.com/i2kAT1eARx