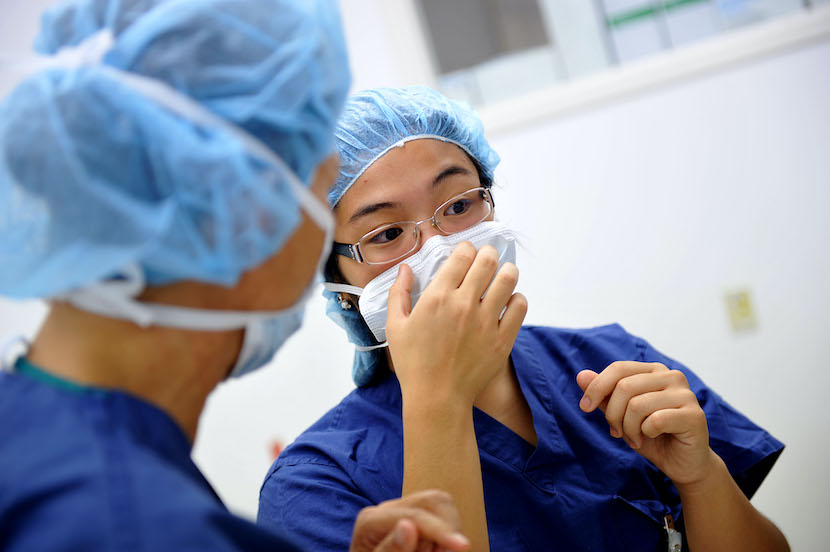 In this heart-breaking, but eye-opening piece, Bloomberg journalist Janice Kew tells the story of one South African doctor stationed at Catherine Booth. Dr Du Plessis – specialising in TB – found himself dealing with Covid-19 patients when the pandemic hit South Africa in late March. As the hospital he worked for became a designated Covid-19 treatment facility, the 30-year old doctor noticed that the regular faces he was used to seeing in the hospital were no longer showing up. ‘You make the assumption that a lot of these people passed away at home because they never made it to a hospital. To send sick people home to accommodate often asymptomatic Covid-19 patients makes no sense.’ While the Covid-19 infection rate continues to decrease in South Africa, there are concerns that the full impact of this virus will only come to light in the months to come. – Jarryd Neves

(Bloomberg) – It’s 5:30 am when Marthinus du Plessis wakes up and packs his second pair of scrubs before driving to work at a rural hospital in South Africa’s eastern KwaZulu-Natal province. He’s one of the doctors who processes patients coming in for Covid-19 tests and makes calls on admissions, and has to give himself extra time to layer on his boots, gown, mask and visor.

Before the outbreak reached South Africa, Du Plessis, 30, was specialising in tuberculosis and dealt almost daily with diabetes and hypertension. Now that the health system mainly focuses on the coronavirus, he’s deeply perturbed about the patients he hasn’t seen in months. South Africa responded quickly to keep the epidemic in check, imposing a lockdown in March to allow its health system to prepare. Discretionary procedures were canceled and a ban on alcohol sales meant that trauma wards received fewer patients than usual. That’s helped to keep the country’s hospitals from being overrun, even as confirmed cases surged to more than 600,000, the most in Africa.

But the human cost is slowly becoming evident in the country that has the world’s largest HIV epidemic, 300,000 people with tuberculosis and a range of other diseases. In the community of 350,000 that Du Plessis’s hospital serves – named after Catherine Booth, the co-founder of the Salvation Army – one in four people have diabetes or hypertension.

When the lockdown started, Catherine Booth’s nine doctors were instructed to admit only the very ill. Five months later, the 170-bed tuberculosis facility was told by the local government that it would become a dedicated Covid-19 hospital.

Tuberculosis hospitals have isolation wards that can be adapted easily for Covid-19 patients, so it made sense. Still, the move resulted in most patients being directed to other hospitals that are at least an hour-and-a-half drive away, and widespread poverty meant that many people opted to go home instead.

The damage that’s done in the community will only become clear in a few months’ time, according to Du Plessis.

“After a few months you realise that a lot of the familiar faces aren’t there anymore,” he said. “You make the assumption that a lot of these people passed away at home because they never made it to a hospital. To send sick people home to accommodate often asymptomatic Covid-19 patients makes no sense.”

Near the peak of the epidemic in July, Du Plessis was getting about three diabetic ketoacidosis cases a day — people who require intensive management because they’ve stayed away from regular treatment longer than they should have. Stabilising these patients could take three to four hours, he said. At the same time, less than a handful of people died from Covid-19 in Catherine Booth.

South Africa recorded as many as 42,396 natural excess deaths from May to September, according to data from the South African Medical Research Council. That number includes both those who are likely to have died of the coronavirus without having been tested and people who died of other causes because they were unable to seek treatment.

Besides having to switch focus, Du Plessis has also had to contend with an increased workload. South African doctors aren’t supposed to work more than 80 hours overtime a month and limit shifts to a maximum of 16 hours. In June, Du Plessis clocked 132 hours overtime. Now he still works a 32-hour shift about once a week.

A ban on visitors has meant that doctors are now forced to give patients emotional and psychological support, even though they’re not specifically trained to give counselling.

“You become not just a doctor, but a life coach of sorts,” Du Plessis said. Peers at other, more urban hospitals who are seeing some of the worst cases “are really struggling,” he said.

In late July, three days after taking a weekly test, Du Plessis received the news that he had tested positive.

“Even with protective gear, when you are repeatedly exposed to the same pathogen, you should assume at some point you will get it,” he said. An asymptomatic case, he was back at work 10 days later.

Today, the outbreak is slowing down across South Africa, with the number of new infections declining to around 1,000 a day, from more than 13,000 a month ago. Still, Du Plessis sees the fallout from the outbreak enduring for some time to come.

“I worry that the problems outside of Covid will be much more severe than Covid itself,” he said.