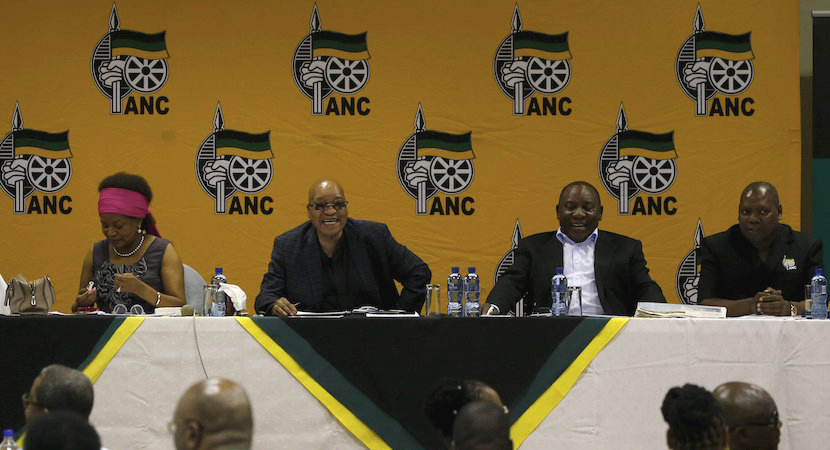 South Africa is headed for a watershed at the national elections in 2019 because by then enough ANC supporters will be sufficiently fed up with weekly glaring examples of rampant Zuptoid corruption and non-delivery. Independent strategy advisor, Shawn Hagedorn, brings us a new and little-flighted possibility; if the ANC’s reformist faction loses their bid to have Cyril Ramaphosa elected party president at this December elective party conference, they’d simply break away. It’s hard to see reconciliation between the State-Capture Zuptoids and the ANC ‘rescue’ faction after the things their leading lights have said about Msholozi’s slyly-constructed State patronage monolith. All the surveys point to Ramaphosa taking at least half the party with him, so low has Zuma’s popularity sunk. This, of course, is the watershed. No more conjecture on how opposition parties will band together to consolidate the votes they’ve gouged from traditional ANC supporters to form a new coalition government. Now we’re looking at the possibility of a broader coalition with a ‘cleansed’ ANC (whatever they call it). So – two governments of national unity in over 25 years? Who’d have thunk it? I’ll bet on it now, before the electoral bookies and scribes rapidly shorten the odds. – Chris Bateman

Prior to last August’s local elections, it was generally accepted that the ANC would maintain its majority in the 2019 national elections with President Zuma choosing his replacement. SA’s politicos must now digest the implications of how such a scenario has come to look increasingly implausible.

Large and growing anti-Gupta-cronyism sentiment within the ANC and its traditional alliance partners, amid an ongoing stream of scandals in the news, all but precludes the outcome the Zuma faction must achieve: the next wave of ANC leaders accommodating their patronage network; and the ANC winning a majority, or near majority, of the national electorate in 2019.

If the Zuma faction prevails in December, this risks the anti-graft ANC members decisively breaking away – to form a new party, or perhaps to join an existing one. Thus, agreeing to a compromise candidate in December might seem to be the safest option for those hoping to maintain the status quo. However, it is impossible for there to be a true compromise candidate as the status quo is not at all economically sustainable. That the ANC cannot resolve this is central to its 2019 electoral vulnerability.

Low, non-inclusive growth provokes deep electoral angst. Polling and traditional voting patterns then become unreliable as evidenced by the surprising Brexit and Trump victories. SA lacks growth drivers of any kind while the ANC lacks a unifying candidate and a coherent economic strategy. Purging internal corruption would not be easy nor sufficient.

With declining prospects, as depicted by prolonged stagnation and credit rating downgrades, SA must now reconceive its political and economic landscapes. That SA’s economy has been unresponsive to global demands reflects policy indulgences which trace to the nation’s politics suffering from two mutually reinforcing shortcomings: national elections have not been competitive; and the constitution’s structure leads to party bosses being profoundly powerful. A coalition government would meaningfully mitigate both flaws.

Even ignoring the state capture slide, a ruling party confident of its ongoing electoral dominance and controlled by party bosses, while being beholden to an alliance of unionists and communists, was not going to prioritise working with business leaders to maximise competitiveness and growth. In addition, historic, geographic, and geological precedents have been deeply limiting, particularly: political oppression of a racial majority; and economic isolation made manageable through resource extraction.

Bizarrely, the politics and economics of this broad narrative have now imploded. The ANC’s tripartite alliance is splintering. A significant split of the party seems probable in 2018. That the stalwarts are publicly challenging the ruling party’s bosses is more than a historical footnote. State capture has undermined poverty alleviation hopes in ways that pre-1994 SA could not.

SA’s traditional sources of economic momentum have been devastated. The trajectory of mineral demand keeps flattening as the global economy pivots toward services-led growth. Policies, practices, and pirating have further discouraged investing in SA’s mining sector.

Domestic consumption accounts for about 60% of the economy and its growth prospects have been pummelled by excessive reliance on debt to fund consumption. Household progress has been further blighted by meagre advances in conquering the legacy of a huge portion of the workforce being hectically under skilled.

Today’s ANC comrades can’t sing and dance their way out of the web of misperceptions and missteps they have haphazardly choreographed. Translating “Radical Economic Transformation” into “inclusive growth” is an extraordinary challenge.

SA’s per capita income is stuck with no hope in sight. As has become common elsewhere, high skilled workers are gaining while everyone else is slipping. Growth, and jobs, will have to come from selling value-added goods and services to wealthy foreigners. This will require sweeping policy reforms.

The “White Monopoly Capital” meme was quite successful as it is true that much of SA’s economy remains under the control of whites. Thus the phrase resonated nearly rebuttal free.

Conversely, the follow up slogan, “Radical Economic Transformation” invites a free-for-all effort to define it. The RET phrase was to build on its WMC predecessor to justify placing cronies in charge of an ever larger portion of the economy. The effect was always going to be narrow enrichment at the expense of broad poverty alleviation.

As scandals percolate, the odds further favour a 2019 coalition government. This is itself a type of outcome. Political parties must now focus on how their voter support and coalition appeal will be shaped by their economic policies.

The party which will gain the most supporters, and perhaps then provide the post 2019 coalition government’s finance minister, is likely to be the one that can best define a “Radical Economic Transformation” model that provokes potent, and sustainable, inclusive growth. As SA’s politics are set to become far more competitive, the economy should respond in kind, eventually.